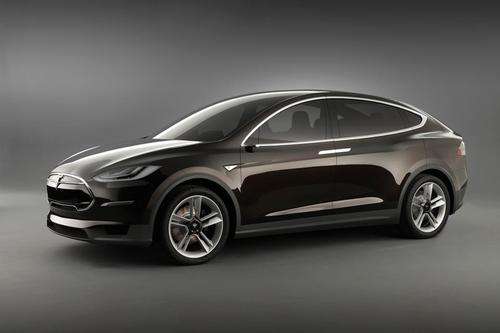 Tesla reveals the Model X, an all-electric SUV that's faster than a Porsche 911

The 2013 Tesla Model X unveiled tonight is an all-electric full size SUV/minivan, capable of holding 7 full size adults and all their luggage, and with the right options is capable of out accelerating a Porsche 911.
Advertisement

This evening Tesla Motors CEO Elon Musk revealed the long-awaited Model X electric SUV before a huge crowd at the SpaceX headquarters in Torrance CA, and over the Internet via livestream to viewers around the world. What would it be like to drive an all-electric SUV that's faster than a Porsche 911? You'll have to wait until 2013 to find out.

The Tesla Model X is built on the same architectural base as the Model S sedan, but biggified to become an SUV. Tesla designed the Model S so it could be used as the platform to build other cars, and the Model X is the first of those cars. Like the Model S, the X supports up to three rows of seats, but there's a large cargo area behind the rear row of seats. Again, like the Model S, there is an additional cargo area in the front, which Elon Musk wants us to call a "frunk." (get it? frunk? front trunk?) This is a word sure to cause those of us who own classic VW's to scratch their heads. In any case, because the Model X doesn't have an engine and all the stuff the designer would normally put in the front, Tesla decided to make that space into a large cargo area that also acts as a large crumple zone in case of accidents. The three rows of seats plus cargo translates into "7 full size adults plus all their luggage." Effectively that's larger than typical minivans.

Visually the Model X looks similar to the Model S, however side-by-side the X is definitely much larger. The most visually striking feature of the Model X is the doors for the second row of seats. They're not gull wing doors, but what Tesla calls "falcon wing" doors. Gull wing doors swing out before reaching upward to the sky, while the Model X falcon wing doors work significantly differently. The Model X doors are double hinged so that as you open the door, the arc it follows doesn't go out too far from the car. The problem with gull wing doors is they're impossible to open when in a tight parking lot, because the door hits the car next to yours. Because the falcon wing doors open upward, they can be opened even in tight parking, making them even better than the typical sliding doors which take up some of the space in the gap between parked cars.

2012 Electric Cars That Will Rock Your World

The other significant feature of the Model X is the dual electric motor all-wheel-drive system. While all-wheel-drive systems have been available for decades, the Model X system is significantly better. Unlike the Model S, the X has two motors, one in the front, the other in the rear. Because they're electric motors, each are instantaneously independently controllable, to dynamically adjust the power going to the front or the rear, depending on which has more traction. For example if the car is on ice and one of the wheels is spinning, you don't want power going to that wheel but to the other ones. This means it should have more traction and road holding ability than any 4-wheel drive car.

The Model X will be offered with three drive train options. The first is a single rear-mounted motor, as in the Model S. Second is dual motors as just described, and the third is a dual motor system which adds the extra performance required for the Model X to out-accelerate a Porsche 911.

Why did Tesla build an SUV as their third car? They wanted to create something new and innovative, and saw an opportunity to do so. As Elon Musk described, the problem with the Minivan is it has no style, and while SUV's tend to have better style they don't have the functionality of a minivan. They wanted to create a vehicle with the functionality of a minivan, coolness of an SUV, and being Tesla Motors they brought in the performance element.

There has never in automotive history been a cool hip green thing with the functionality of a minivan and the performance of a sports car.

The Model X is said to be priced similarly to the Model S, or in the $50-80,000 ballpark. As with the Model S it will come with one of two battery pack sizes giving different ranges, but Tesla has not announced what the range will be. This will no doubt be grist for those complaining that electric cars are only being built for rich folk. And, yes, this is a fair criticism. Tesla's long term plan has been to bootstrap themselves into the moderate priced car market over time. Obviously the company hasn't reached that goal as of yet. Both the Model X and Model S deliver significantly more range than the other electric cars, but with a higher price. In the meantime those who complain about the price are advised to look up the cost for an 85 kilowatt-hour battery pack versus the cost for a 24 kilowatt-hour battery pack such as is in the Nissan Leaf and Ford Focus Electric.

While we now know quite a lot about the Model X, full specifications and pricing were not announced. The car is still in development, after all, and details may change between now and 2013. As of now Tesla expects to enter limited production of the Model X in 2013 with full production commencing in 2014. You can place reservations beginning now.

jthebear wrote on February 10, 2012 - 8:05am Permalink
I want to take the writer to task. "Bigified" is a horrible word. Enlarged will do quite nicely thanks. I don't want to read a mainstream article and feel that I must go out and buy baggy jeans.
jaime wrote on February 10, 2012 - 8:39am Permalink
Stay tuned 4 next bulletin.......
Mikon wrote on February 11, 2012 - 2:02pm Permalink
Sounds like the Model X is a true and realistically practical innovation that offers good mileage range, low fuel cost, improved (and safer) handling, good crash performance, outstanding driving performance, and equal utility to an upscale SUV. The Chevy Volt may be in "no man's land" as it is about twice as costly as a standard Prius and its "all electric" mode is no better than several alternates on or about to enter the "short range" driving/commute market. The Volt is a super costly, taxpayer supported, employ the UAW, wave the Obama "Green Flag," development experiment that is non-competitive in the marketplace. Small, diesel-powered vehicles, diesel-powered hybrids and the likes of the Model X will make the Volt obsolete in a short time. Expect under 100,000 vehicles over three to four years before it is discontinued