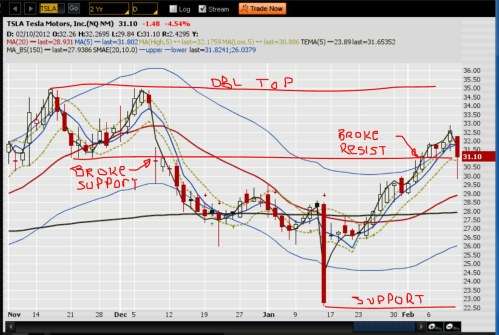 The recent announcement of the 2013 Tesla Model X did not shelter Tesla Motors, Inc. (Nasdaq:TSLA) stock from today’s early morning downdraft, but a late morning recovery seems to be in process. Note the long bottoming tail on that latest price bar of the updated daily chart.
Advertisement

Last time I wrote, Tesla Motors, Inc. (Nasdaq:TSLA) assured investors that it was on schedule to meet the deliveries for its new Model S, despite the recent departure of two key developers.

Also at that time, the display at NAIAS 2012 showed details that are no longer concept, but pre-production level in time for delivery by mid-2012. Read: Despite stock selloff, Tesla Model S impresses at NAIAS 2012

Yesterday, however, TN writer David Herron reported on the 2013 Tesla Model X which was unveiled the night previous night as an all-electric, full size SUV/minivan, capable of holding 7 full size adults and all their luggage; and with the right options is capable of out accelerating a Porsche 911. Read: Tesla reveals the Model X, an all-electric SUV that's faster than a Porsche 911

Question before today was: Will that news propel or at least support the Tesla Motors, Inc. (Nasdaq:TSLA) stock? Well, early today we have an answer.

For the record, TSLA has been in a bull wave since its spike low on Jan. 13. Also per the Tesla stock chart, the 20-period moving average is only slightly above the 150-day moving average, a favorite long-term tool of technical analysts, like Oppenheimer’s Carter Braxton Worth who often appears on CNBC’s Fast Money program.

On a more price swing perspective, the MA-20 envelope is set at 10 percent above and below the average. So, any downturn from the peak of 32. 90 may find support at the bottom of the channel at 26.03.

It is no surprise, though, that the 31 level would find a pause, as that was broken support when prices fell through late Nov. 2011.

So, where do we go from here?

The support-resistance levels are already in. And anytime good news is disregarded, that’s not a positive in any trader’s mind. Then again, a recovery after a severe low shows traders believe in the upside potential

Nevertheless, there is certainly no lack of internal intelligent design or drive at Tesla, in my opinion. The electric drive is solid. And Toyota is not ignorant of Tesla’s technical value either.

Bottom line: The Tesla X news didn’t get the stock pop that Tesla may have been looking for. Perhaps investors are merely focused on Job-1, and any new models may be merely a distraction at this point. So, hold fast seems to be the message of traders, except for those who sold off this morning.

The only real earth shattering news in my mind would be a Tesla at a price all could afford. Wishful thinking.