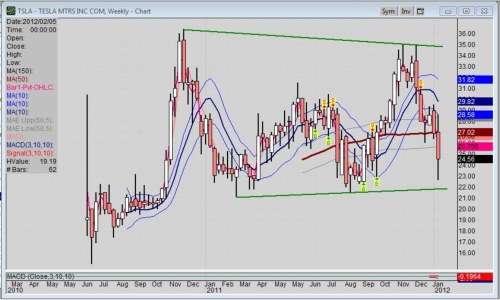 Despite the recent departure of two key developers which inspired recent stock selloff, Tesla Motors, Inc. (Nasdaq:TSLA) assured investors that it is on schedule to meet the deliveries for its new Model S; and the display at NAIAS 2012 shows details that are no longer concept, but pre-production level in time for delivery by mid-2012 .
Advertisement

Tesla Motors, Inc. (Nasdaq:TSLA) reported about one year ago that strong sequential revenue growth, gross margin improvement, and, more important, the Model S Alpha Drives were on schedule. Now, by the looks of the Model S display at NAIAS, the car program appears to still be on track for mid-2012 deliveries.

Recent news, though, of the departure of chief engineer Peter Rawlinson and Nick Sampson, supervisor of vehicle and chassis engineering, led some investors to sell-off shares late Friday.

Despite the impressive appearance of Tesla Motors, Inc. (Nasdaq:TSLA) at NAIAS 2012 in Detroit, it is fitting for investors to wonder if this company can still make it, even with its alignment with Toyota.

According to an article by seekingalpha.com , Investors Business Daily was quoted as receiving an email from Tesla which made it clear that Mr. Rawlinson returned to the UK to tend to family; and Mr. Sampson had already transitioned his duties before he left. That does not appear to imply any sudden firing or walk out. Ref link: Tesla stock collapses, but looks massively oversold

Having viewed the aluminum body structure last year in detail and talking with Tesla engineers at 2011 North American International Auto Show, I dare say I was impressed with the lightweight structure. In fact, this year’s chassis display at NAIAS 2012 was also impressive, and stands as a leader, ahead of the major OEMs in the creation of lightweight body structures. So, perhaps this is indeed a future auto manufacturer in the making.

Think back again to the days of DeLorean and even later to Tucker. Likewise, there were those who developed and walked away; and many outsiders criticized and even scuttled every move that both made; especially Tucker who brought us aircraft quality disc brakes.

Of course, there is a big difference in the volume of production between an all-aluminum structure and steel. The OEMs have a long way to get to super-light body structures using aluminum, and an even longer row to hoe with carbon fiber. The only other companies with this kind of expertise are Lotus with its line of cars and Mercedes-Benz with its new SL300; and, I believe, Lotus is already a consultant to Tesla and co-developed the Tesla Roadster.

And that connection to Tesla is key to these departures. My own visit to the Lotus Engineering facility in Sterling Heights, Michigan this past summer told me that body structure design does NOT have to be done in-house. Read: Lotus Engineering cues media on future of automobiles with Technical Press Workshop

Nevertheless, there is certainly no lack of internal intelligent design or drive at Tesla, in my opinion. The electric drive is solid. And Toyota is not ignorant of Tesla’s technical value either.

The Model S sedan is indeed a beautiful car; albeit out of my budget range. Still, it has features that were surprising, above and beyond the aluminum structure and electric drive. Within the tech-oriented video, witness those two reverse-mounted, third-row seats as well as the interior and exterior. Also note the video screen on the dash, the biggest of any I have ever seen.

From a big picture perspective, Tesla looks to some traders as heavily oversold. Perhaps this is indeed overactive selling on what is perceived as bad news. As the weekly chart above indicates, we were already in a sell-off that started in early December, with a confirmed channel breakout to the downside.

On a 52-week look-back, TSLA has reached a high of 35 and a low of 21.11. Also note the trend lines that act as future support and resistance levels. Fact is, TSLA is far from those levels.

Especially consider the weekly bar of this past week. It does have a long bottoming tail, indicating that buyers came in. Question is, will more buyers come in to build price support in the following weeks?

If so, then the current weakness in the stock price may be a level of opportunity to build a significant position ahead of what might be a solid launch of the Model S.

Tesla Giga Berlin's New Hurdle: It's Not Only the Gov't, but Now Tesla Itself
Teslas Are Sold Out Until 2023, But The Timing May Reverse
END_OF_DOCUMENT_TOKEN_TO_BE_REPLACED