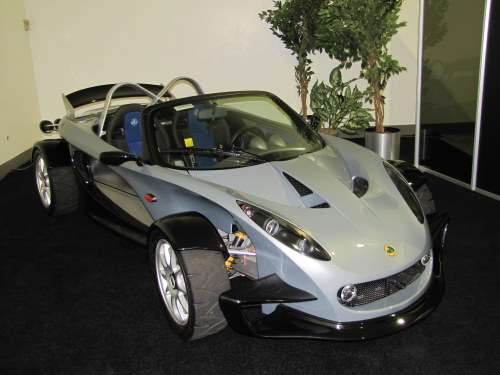 In a rare private workshop following the week of The Battery Show 2011, Lotus Engineering brought together a small group of journalists to its Sterling Heights, Michigan office for a Technical Press Workshop, a review of its technologies that will define the cars of the future.
Advertisement

The Lotus Engineering Technical Press Workshop was comprised of five, one-to-one sessions over a 2-½ day period, from Wednesday, November 2 through Friday, November, 4. Torque News took the Friday morning slot, as I had already met Gary Haddon, Lotus Marketing Manager, at The Battery Show 2011.

The Lotus Engineering staff revealed much about their vehicle programs that included Lightweight Vehicle Architecture studies and Driving Dynamics projects.

After each workshop, the media was then able to view a number of new and exciting exhibits that included the 414E Series Hybrid Evora featuring a series hybrid drivetrain and a Sound Synthesis System designed for electric vehicles that has been on display at the Geneva Motor Show and more recently at Frankfurt.

Additional exhibits included the all new production Range Extender engines, both the 3 cylinder and 2 cylinder variants, their Hydrogen Fuel Cell London Taxi and the Tri Fuel 270E Lotus Exige, which this reporter viewed at The Battery Show 2011 in Novi, Michigan the week prior.

At the end of the workshop session, the media was offered an evaluation ride and drive in the Tri Fuel 270E Exige, Hydrogen Fuel Cell Taxi and a Lotus Evora. On Friday, though, the media reps seemed to be on a tight schedule.

At Friday’s session, I learned that only ten media reps would attend in total; and Friday morning’s session already had three, which included this reporter from Torque News. Frankly, I thought the place would have been packed, but SEMA was still in play in Las Vegas.

To set the stage, the usual history lesson was given about Colin Chapman, the founder of Lotus in 1952. He felt there was a two-way relationship between man and machine that had to be met; and he did this within a framework of four ideas:

Thus, Chapman’s philosophy was to engineer lighter racing vehicles rather than constantly just building larger, more powerful engines. Key to his many successes especially included vehicle handling, of which Lotus is still deemed the best in the world.

Organized as a corporate entity under Group Lotus, the subsidiaries include Motorsport, Lotus Cars and Lotus Engineering. Headquartered in Norfolk, England, other offices and entities exist in Europe, Asia and the United States. Michigan now has two; one in Ann Arbor and the other in Sterling Heights.

If there is one area that Lotus excels it has to be in the area of lightweight body structures. The Lotus team believes that 40% lighter bodies are achievable, but the cost is deemed in America as too high, as aluminum (or aluminium as they say in England), is much more expensive than steel; plus the changes in manufacturing processes are vastly different than in present auto plants.

However, Lotus believes emphatically that the industry still needs to view light-weight material costs amid all the savings that the rest of the systems will provide, because they do not need to be as powerful or in such large part counts.

In fact, Lotus likes to tout the words that “the lightest component is the one that isn’t there.” So, design functionality is key. Thus, the Lotus team more often combines parts so as to attain multi-functions. In some cases, a part can handle 4-5 functions.

The best descriptive words I heard was, getting rid of “all that parasitic mass, just sitting there.” As a designer with over 39 years, I dare say I had never heard it quite put that way before or thought of parts as parasites, but the gentleman from Lotus had a point.

Lotus in no way shuns electrification, as they develop powertrains as consultants for many companies around the world. Witness the Evora 414e. Yet, the powertrain engineers do not believe electrification is even necessary if the weight of the vehicle is reduced sufficiently.

After all, the team at Lotus believes EVs are too costly for the masses to make any significant contribution to lowering oil consumption. One look at the retail cost of the Ford Focus Electric at $39.9K, the Chevy Volt at $42K and the Nissan LEAF at $36K, and it’s hard to disagree with them.

When I asked the Lotus team about the next level of engine design, I was surprised that nothing was really new, except its new version of two-cylinder generator engines that can be placed vertical or horizontal. In fact, only one engineer was qualified to answer my question about split-cycle engines, like the Scuderi and the Tour engines. He admitted not knowing much, and only knowing about Scuderi, but felt it had too many parts. How he derived that opinion was not disclosed. I resolved to press him further in the future on that.

He did agree, though, with Ford’s approach to engine downsizing and the use of turbos and superchargers. Little was mentioned about stop-start technology, so it was unclear how this efficiency was going to be met for 2025 mandates. Recalling the Lotus founder’s theme, I assumed weight reduction was key just as Colin Chapman had always envisioned it.

Still, Lotus Engineering has a vision for 2020 with engineering feasibility by 2017; but weight reduction and body redesign is a major part of the formula.

The Lotus Engineering team summed it all up with its ideas about a reasonably priced car for the masses. Using all of it knowledge base to build a super-light but safe body structure, the Lotus team proved through its participation with an energy project supported by the California Study, that a current Toyota Venza which weighs in at 383 kg for its body-in-white (BIW) could be reduced to 241 kg.

Using a body design with a magnesium structure as an initial basis for the California study, the Lotus team was able, using what it called sensitivity analysis, to define the weak and torsion moments. Then they replaced elements mostly with aluminum with some boron-steel elements in key areas like the B-pillar.

Point is, all this effort enabled Lotus to go one step further in its own assessment of the future of the automobile. First is, lighter vehicles do not have to be unsafe. Second, manufacturing processes would have to change over time to include new metal joining techniques such as friction spot joining instead of spot welding, because the use of aluminum is crucial to weight reduction. In most cases, a bonding material is also involved.

According to the Lotus team, it is sure it can beat the BMW X5 even today by 20% on torsional stiffness alone with its style of body design.

In the end, Lotus Engineering told us its World Vehicle Concept would have a 125 mpg capability. Furthermore, the cost could come in at $9,000 MSRP. Recall the 1991 Saturn SL1 which I helped launch came in a little higher than that; and that was in 1991 dollars.

Then a member of the media team I sat with challenged the Lotus engineers on why that cannot happen today, especially after multiple bankruptcies which should have rid the industry of old thinking; and then the truth came out. Change still comes slowly due to economics.

Yet, while the auto industry still needs a major paradigm shift to achieve those kind of results from Lotus, it is easy to see why most often media types criticize the industry. The need in society is great and the industry seems to sit on ideas.

Then again, there is always another side to every story. With all respect, most media types never built or designed a car at 60 units per hour. Journalism is a cakewalk by comparison. Try doing that where the demands of the new aluminum joint processes require 20 minutes just for the adhesives to cure, but the production rate must still be met. On top of that you have to make a profit to be sustainable.

If there was a bottom line to this Lotus workshop, it was this: The auto industry will need to reduce weight significantly to achieve maximum efficiency. Furthermore, the whole idea of low weight materials and manufacturing costs have to be viewed in terms of the total transportation system. No longer can we view each element on its own, apart from the system it supports. That includes engines and body structures.

Many of these vehicles were already covered in my report on The Battery Show except for one.

And for another look at the Evora 414 Evolution with video of the synthetic sound system, read: Lotus Engineering wows Battery Show 2011 with synthetic-sound technology