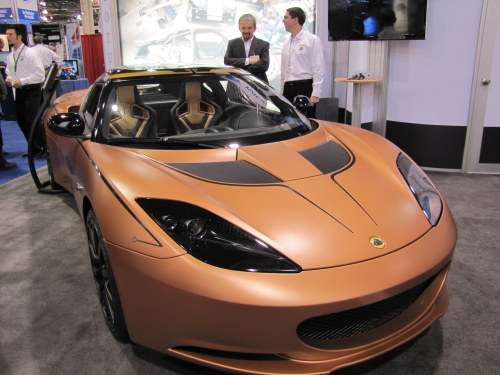 Think about driving a quiet Lotus Evora 414E Hybrid down a narrow street with pedestrians that may not hear your car coming towards them, then see and hear the solution via the video from The Battery Show 2011.
Advertisement

Enter the sound technology of Lotus Engineering. This system first identifies that the body in front of you is indeed a pedestrian and not another car or a light pole. Then it emits a sound that mimics an IC engine; something that this generation is quite familiar.

This all started a number of years ago when Lotus Engineering did its own case study after electric and hybrid vehicles were being criticized from a group of consumers that don’t drive: the blind. Fact is, the lack of noise from hybrid vehicles at slower speeds when running on electric power creates a hazard, according to blind and partially sighted people, who rely on their ears to determine whether it is safe to cross the road or walk through a parking lot.

According to the study, even fully sighted people and cyclists use audible cues to judge the proximity of moving vehicles. So, in response, Lotus Engineering developed a system to synthesize external sound from electric and hybrid vehicles to overcome what is seen as a growing problem facing pedestrians.

For the record, in Washington DC, a bill is milling around Congress to establish a minimum noise requirement for hybrid and electric vehicles; and Europe is set to follow suit.

Here is how Lotus Engineering approaches the noise generator: When a car is operating on the electric motor only, throttle and speed-dependent synthesized sound projects an engine sound in front of the vehicle.

The latest and coolest part of this synthetic sound technology was recognized when Lotus Engineering customized the system to also provide that high-revving sound for auto enthusiasts who still like to hear the roar of an exhaust. Thought was, it would give drivers an even greater feel for the car’s response, because it is so quiet.

Up to that point, the concern was over pedestrians, but drivers could also benefit for the synthetic sound; furthermore, it could be customized.

For example, I sat in the Lotus Evora 414E Hybrid and went through the gears using the paddles as though I was driving. It was much like an arcade racer. Yet the sound could be switched from a V8 to a V12, and even to a space ship sound. Future could include downloadable sounds like you get with your phone.

Bottom line here is that Lotus Engineering is not new to sound engineering. In fact, it started sound cancellation, the system whereby unwanted sounds are literally cancelled by another synthetic sound; and that was 15 years ago.