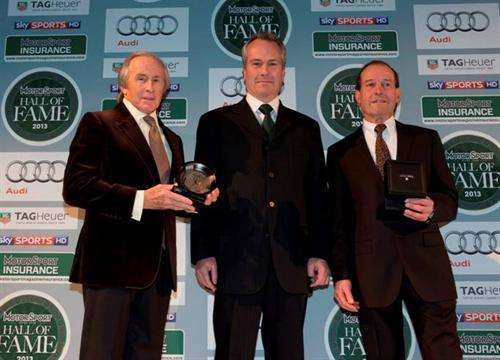 Lotus is without a doubt one of the most powerful names in motorsports and has been one of the chief contributors to automotive racing since its inception. This year's Motor Sports Magazine Hall of Fame event centered on Colin Chapman, the Lotus engineer who started it all, presenting Chapman's son Clive who himself founded Classic Team Lotus in honor of his father.

The evening's events at the Royal Opera House in London had several awards being given, with three honors going to the pictured Sir Jackie Stewart, Clive Chapman, and Jackie Oliver (left to right).

Colin Chapman built his first race car in 1948 in his girlfriend's father's garage. Since then, Team Lotus has won numerous races, championships, and accolades for its powerful drive (literally and emotionally) in the quest for racing excellence and top-end sports car manufacture. Team Lotus, which Colin founded, has won seven Formula One Constructor's Championships and six Drivers' Championship titles and the team has competed in over 500 Grand Prix races with 80 total wins.

Chapman applied engineering principles to racing in a way that forever changed the sport. Among many firsts, his innovations brought the first sequential transmission to F1, the first reclined-position driver's seat, the first aircraft-style (bag) fuel tanks, the first driver-specific "moulded" car shape for improved performance, the first wedge-shaped fascia, the first side-mounted radiators for improved cooling and less resistance, the first multi-element rear wing, the first carbon fiber monocoque, and many more. In fact, Colin introduced dozens of innovations, many of which (including those mentioned) are still standard Formula One safety and performance enhancements today.

A lot of those innovations eventually made their way into production automotive as well, changing how our cars operate today. Chapman joins other greats like Niki Lauda, Damon and Graham Hill, and Tom Kristensen in the MSM Hall of Fame.

John Goreham wrote on February 28, 2013 - 5:05pm Permalink
Good to see Sir Jackie involved in this. He was hated by the auto racing industry for his safety activism during his era.

LG's New EV Battery Plant Is a Welcome News for Tesla
Tesla Giga Berlin's New Hurdle: It's Not Only the Gov't, but Now Tesla Itself
END_OF_DOCUMENT_TOKEN_TO_BE_REPLACED