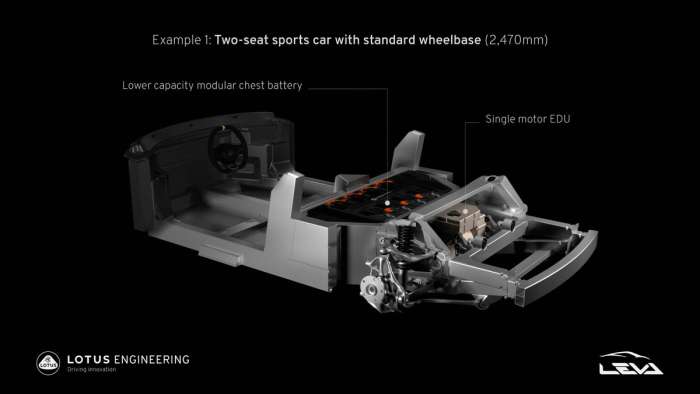 Designed to underpin the new generation of Lotus electric vehicles, the new platform can support electric motors developing up to 872 horsepower and two different battery packs rated at 66.4-kWh and 99.6 kWh.
Advertisement

With support for a single-motor or a double-motor setup and two different wheelbase options, the new Lotus EV platform will underpin at least three (more likely four) new Lotus vehicles in the next five years.

Lotus as an only-EV manufacturer

Geely-backed British manufacturer revealed intentions about its all-electric future after the revelation of their last ICE-powered sports car – the Emira. Shortly after, we got the news about the Lotus-Alpine cooperation. French manufacturer of sports cars also announced that it is migrating toward electrification and it will use Lotus-developed tech to create an all-new line of vehicles. Apart from Alpine cars with the same onboard tech as Lotus cars based on the new platform, I can imagine Lotus Engineering selling their solutions to several other manufacturers. After all, that is something Croatia-based Rimac does all the time.

While we do not have all the details about the new platform, what we know sheds a nice light on the Lotus' intentions. First of all, check out this table that shows all the essential characteristics of the so-called Project LEVA (Lightweight Electric Vehicle Architecture).

This tells us that Lotus will try to elevate its position on the market and compete with none other than Porsche. Scheduled to arrive in 2026, the small two-seater will be a product of cooperation with Alpine. Interestingly enough, Alpine will reveal its own electric two-seater replacement for the A110 in 2024. Lotus two-seater will be closely related to it.

Such a clear path into the realms of electrification practically started today with the revelation of the Project LEVA.

That is the first layout prepared for the small sports car. It is a chassis with a smaller battery pack laid out behind the driver and the passenger. A two-seat Lotus sports car should offer staggering driving abilities with centralized weight and a lightweight rear subframe.

The exact layout will garnish the bigger car – one with a wheelbase longer than 2,650 millimeters. This one, however, has a bit longer accommodation for the battery pack. Still, heavy stuff sits in the middle of the car, while the larger battery pack offers a two-motor setup as well. 872 hp in this case, FYI. 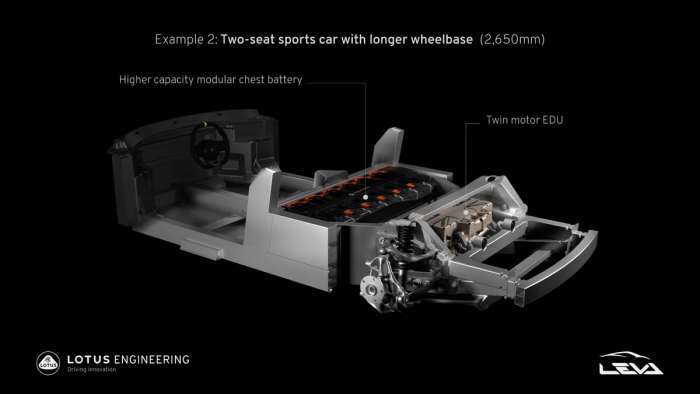 Finally, the third chassis option shares a 2,650 millimeters wheelbase with the previous one, but instead of having a battery pack behind two seats, the battery pack is integrated into the floor. Name? The Slab! Neat.

At the back, instead of the batteries, we can find space for two seats. Porsche Taycan, let me tell you, this is your competition right here! 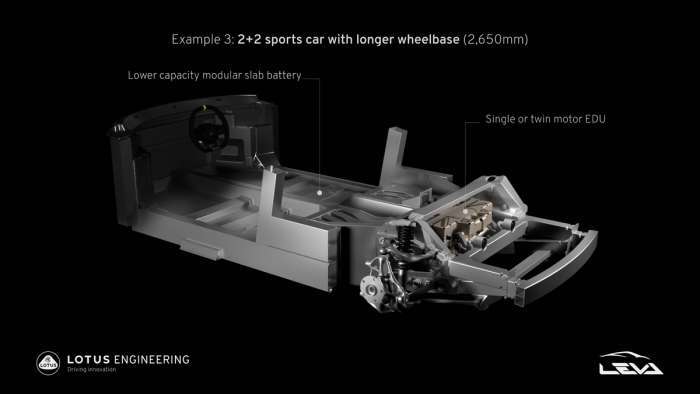 According to the Lotus Engineering press release, the chassis does offer propper high-tech features. First of all, Lotus engineers choose cylindrical battery cells because they bring higher energy density. Furthermore, bonding and welding procedures developed for the new chassis reduce environmental impact and give an outstanding result in improving the rigidity of the whole concoction. After all, the rear subframe alone has to handle two electric motors developing 650 kW at its peak. Astoundingly, Lotus Engineering proudly announced that the rear subframe of the new Project LEVA is 37 percent lighter compared with the subframe on the Emira V6.

I have to say that this „new Lotus“ does sound astounding.
But I have heard it all before.

My visit to Paris Motor Show in 2010 gave me a unique opportunity to see, in person, five astounding Lotus concept cars – Elise, Elan, Esprit, Elite, Eterne. Then appointed Lotus CEO, Danny Bahar, was ecstatic in talking about them and company's future. I have soaked up every word I could hear. They even gave me a small Lotus Elan Concept toy. I still have it. And it all ended at that. Not one of Lotus' fantastic concept cars come to fruition. Now, with the financial backing of the massive Chinese Geely, I feel that all this talk could give us something astonishing.