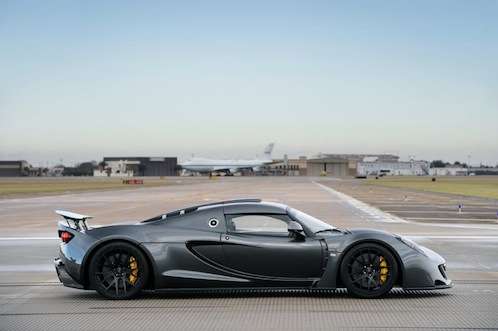 Hennessey Venom GT is the fastest production car in the world and also one of the most exclusive cars on the planet.
Advertisement

If you want to own the fastest production car in the world, you better get your order in quickly because they are selling as fast as the supercar. Hennessey Performance announced that on January 10, 2013 its street-legal production Venom GT supercar accelerated from 0-300 km/h in just 13.63 seconds. This set a new world record as recorded by Guinness World Records. Hennessey Performance located near Houston, Texas only plans to build a total of 29 Venom GTs, with one-third of the production run already being sold. The supercar is not only fast, but owners of the Venom GT, are a part of a very exclusive club.

Hennessey reports that the record setting time was an average of two runs made in opposite directions within one hour and validated by a VBox 3i GPS-based data logging system. Guinness World Records and VBox officials were both on hand to certify the record-setting numbers. The Guinness representative inspected the car before the runs which were held at Ellington Airport (also used by NASA) located southeast of Houston, Texas, and features a “perfectly paved” 8,000 ft. runway.

The seventh production Venom GT completed the first run in 13.18 seconds with a 4 mph tailwind. The second run was made in 14.08 seconds while encountering a 6 mph headwind. The resulting two-way 0-300 km/h average was 13.63 seconds. Hennessey’s Venom GT is a street-legal supercar that is powered by a 7.0-liter (427 cubic inch) V-8 engine fed by twin Precision turbochargers, and produces 1,244 horsepower and 1,155 lb-ft of neck-snapping torque.

The Hennessey Venom GT rides on Michelin Pilot Sport Cup DOT-approved radial tires, and runs on 93-octane pump fuel. Inside, the interior comes complete with a high-end stereo, air conditioning, and bespoke leather / Alcantara seats. Guinness World Record adjudicator Philip Robertson was given a ride in the record-setting car immediately after the runs and experienced the incredible power and torque. Afterwards he said, "I have never ridden in anything this fast, the acceleration is absolutely amazing."

Company founder and president John Hennessey has been building fast cars his whole life. This is the same team out of Sealy,Texas who built Steven Tyler’s 1200 horsepower 2013 Venom GT Spyder. They also took a stock 2013 Cadillac CTS-V and built the 1,226 hp Hennessey 2013 Cadillac CTS-V supercar and set a world record 220.5 mph on Texas SH 130 back in October. But the Venom GT is his fastest creation ever. "We are exceptionally proud of our team at HPE who helped to make this new Guinness World Record possible," said "This is just the first of several validation tests designed to show the world what our special car is all about - being the fastest. Period."

The incredible supercar weights in at just 1,244 kg (2,743 lbs) and the rear-wheel-drive Venom GT delivers a power-to-weight ratio of 1 horsepower per each kilogram of vehicle curb weight. The supercar has set a number of unofficial records prior to the Guinness record earlier this month. As verified by verified by VBox GPS, it also set a new unofficial acceleration record of 0-200 miles per hour (mph) in 14.51 seconds. That’s 3.17 seconds faster than the previous record held by the Koenigsegg Agera R.

The Hennessey Venom GT costs $1.2 million plus shipping, not including options. Each vehicle is custom built to order and requires six months for completion. Interested parties can contact John Hennessey at 949-206-1120 for more information.