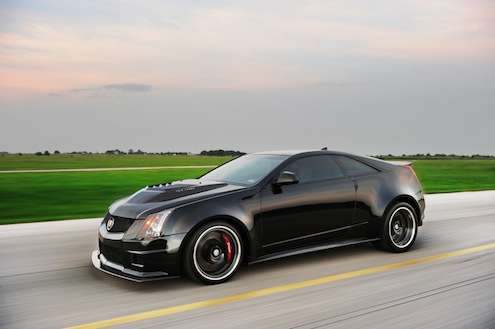 When we wrote about the Hennessey Performance 2013 VR1200 Twin Turbo Cadillac CTS-V last month, we knew it would be fast. They are the performance shop who built Steven Tyler's 1200 hp custom Venom GT Spyder and know how to build fast cars. They told us that the Cadillac CTS-V supercar would launch from 0-60 in an incredible 2.9 seconds with a top speed of 242 mph, that's if they could find a track long enough. John Hennessey knew he wouldn’t find a track near Austin, Texas where he could test his latest creation, so he did the next best thing.

He called the Texas Department of Transportation, Texas Department of Public Safety, Texas Lt. Gov. David Dewhurst and the Texas State Troopers and got permission to test the 1,226 horsepower CTS-V on a section of Texas toll road on State Highway 130, 37 miles out of Austin. So last Tuesday, October 23, 2012, test driver Brian Smith, along with the Hennessey team took the 2013 VR1200 Twin Turbo Cadillac CTS-V out for a little spin to test the TxTag System.

The new section of the toll road has been opened with a speed limit of 85 mph. The Texas toll road is advertised as being a good alternative to getting around Austin traffic or a quicker way to the airport. They also say it’s “about getting where you’re going faster and with a lot less stress.” Maybe that’s why the TDT recommended this stretch of highway to test the ultra-high-performance Hennessey Cadillac CTS-V. It was incredibly fast, and also stress-free knowing the Texas State Troopers were there to happily be involved.

With the stretch of highway closed to any traffic, and two Texas State Troopers watching and clocking the speed on their radar gun, Brian Smith strapped himself into the 2013 VR1200 Cadillac. The professional driver set the adjustable boost controller to the maximum 1226 hp setting and started the powerful 7.0-liter aluminum V8. In the video below he goes through the gears of the six-speed manual centerforce dual friction clutch transmission as his speed is documented on the Race Logic Vbox.

The miles pass quickly as the speed of the VR1200 Twin Turbo Cadillac CTS-V is clocked at 220.5 mph and becomes the fastest Cadillac CTS-V in the world. The huge 15.1-inch performance Brembo brakes with carbon ceramic rotors and eight-piston calipers bring the CTS-V supercar to a stop and he gets high fives from the Hennessey team.

The new segments of SH 130 are now open to the public and TDT is offering a free trial on Segments 5 & 6 from October 24 - November 10, 2012. The new stretch of Texas SH 130 toll road is all-electronic and drivers will pay tolls with a TxTag and receive a bill in the mail for their toll charges. And tolls are based on the type of vehicle you're driving. So if you have a high-performance car, it’s a good place to test it for free, up to 85 mph of course.

It will be interesting to see what kind of a toll charge Hennessey Performance will get from the TDT for driving a 1,226 horsepower 2013 VR1200 Twin Turbo Cadillac CTS-V. Stay tuned.

John Goreham wrote on October 26, 2012 - 12:29pm Permalink
It was nice to read one of these tuner stories that didn't end "And then the engine blew up."