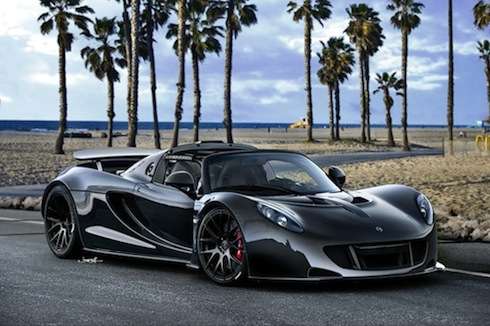 Steven Tyler put in his order with Hennessey for them to build him a custom Venom GT Spyder.
Advertisement

Steven Tyler of Aerosmith fame and one of the judges on American Idol, is well known for his love of fast bikes and his involvement with Dirico Motorcycles. But now, Tyler is venturing into the world of supercars and has just ordered a 2013 Hennessey Venom GT Spyder from Hennessey Performance in Sealy, Texas.

Inside Line reported that Tyler called John Hennessey, and asked for “something special.” John Hennessey knew exactly what to build for the Aerosmith frontman, a custom Venom GT Spyder. Tyler’s car will be ready for the American Idol finale on May 22 and 23rd, but the supercar will not be a part of the program.

"Steven is the nicest, coolest, most talented guy I have ever met in my life. And when he came to me to build him a special car, I took it as an honor to be able to help entertain a guy who entertains tens of millions of people every week." Hennessey added.

Tyler’s Venom GT Spyder, fitted out by Hennessey, is actually built off a modified Lotus Elise/Exige chassis and powered by a General Motors 6.2 liter twin-tubocharged V-8 engine that is also found in the Chevy Corvette ZR1. The company says it has been tested up to 260 mph. The car goes from 0-60 mph in 2.5 seconds, and 0-200 in 15.3 seconds.

And just how much horsepower you ask? Tyler will have three settings to choose from, 800 horsepower for cruising around LA, 1000 hp if he needs to outgun a Koenibsegg CCx with 806 horsepower, and the mind-numbing 1200 hp setting for blowing away the Bugatti Veyron Super Sport. The company claims the 2013 Hennessey Venom GT will sprint from 0-200 mph in just 15.3 seconds, nearly 9 seconds faster than the Veyron. That should get Tyler’s 64 year-old heart pumping.

The Venom GT, created from a base Lotus Elise/Exige utilizes components like the roof, doors, side glass, windscreen, dash, cockpit, floorpan, HVAC system, wiper and head lamps. Hennessey Performance says the Venom GT is a Hennessey creation and not associated with Lotus Cars.

His car will also be equipped with traction control. Steven is also reported to be having a custom stereo installed. JL audio is building the custom system which will be tuned by David Frangioni, CEO of Audio One. Frangioni was the audio engineer and "chief technologist" for the Aerosmith band. On the inside, Tyler is getting a black interior with red stitching.

How much will Steven Tyler be paying for his new ride? $1.1 million.