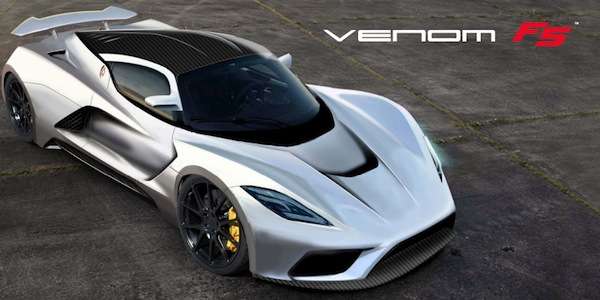 The Hennessey Venom F5 is the ultimate supercar and raises the performance bar even higher. What world records will it blow away?
Advertisement

Hennessey Performance is all about building the hottest cars on the planet and they are introducing the ultimate supercar. It’s called the Venom F5 and it’s the successor to the Venom GT. Venom GT is the supercar that set a world record top speed of 270.49 mph earlier this year. But owner John Hennessey says this new Venom F5 hypercar could easily blow away that record.

What sets this incredible supercar apart form its stablemate is the F5’s lower-drag shape, additional power and enhanced technology. And this series-produced vehicle is completely road-legal and can be driven as a daily driver. Hennessey has sold 16 Venom GTs of the 29-car total production run and builds these supercars for select clients around the globe. The Sealy, Texas performance shop will now offer this new Venom F5 with more power for the ultimate driving experience.

Company president and founder John Hennessey said at the announcement, “We are very excited about this next chapter of the Venom, which brings forth an all-new design that is not only a powerful and unique statement that our clients are looking for, but a vehicle that will achieve even higher performance through improved aerodynamics.”

The new Venom F5 comes with a clean-sheet carbon-fiber body and the drag coefficient drops from 0.44 to below 0.40. Hennessey says the hypercar will still generate significant downforce through both the upper body shape and underbody venturis, a rear diffuser beneath the rear bumper and a retractable rear wing. Hennessey is hoping this will allow the Venom F5 to break the Venom GT world speed record.

The next-generation twin-turbo powertrain that will power this incredible supercar is still under development. But Hennessey will increase turbo size for the heavily-modified Corvette 7.0-liter V8 powerplant and the fuel system and intercooler capacity are upgraded to handle the demands of increased boost. Hennessey didn’t release exact power numbers, but says “it’s conceivable that output could exceed 1400 bhp.” The current Venom GT makes 1,244 horsepower and 1,155 lb-ft of torque.

Several new technologies will be introduced

This new hypercar gets a number of upgrades from the Venom GT. Venom F5 will feature a single clutch paddle-shift transmission whose reduction in shift speeds will enable the F5 to accelerate even more quickly. Another new upgrade will be the addition of a new GPS-based stability/traction control system that will help to channel the F5’s neck-snapping power and also provides an increased margin of safety, whether on the track or street.

30 Venom F5s will be produced

The Venom F5 will be unveiled next year and will be available for customer deliveries in late 2016. Hennessey says at least 30 Venom F5s will be produced for sale worldwide. But the new Venom F5 won’t come cheap and will have a higher price tag than the Venom GT, which currently sells for $1.2 million. John Hennessey isn’t satisfied with what the Venom GT can do and built the Venom F5 for one reason. Look for the new Hennessey Venom F5 to break the Venom GT’s world record next year shortly after its unveiled.