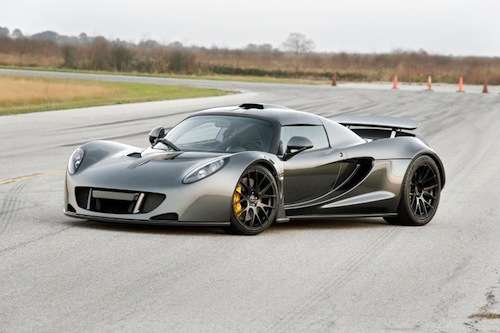 The 2013 Hennessey Venom GT is arguably the fastest car on the planet and the team from Sealy,Texas proves it.
Advertisement

John Hennessey and his team were testing the 2013 Venom GT traction control system and new Michelin Pilot Super Sport tires, and launched the supercar to see how they would perform. What they experienced was the Venom GT going faster than its ever gone before. During the acceleration testing that was captured on the 1:58 minute video below, the Venom GT rocketed from 1-100 mph in 5.91 seconds, from 0-200 mph in 15.22 seconds and 0-230 mph in 19.96 seconds.

That puts the Venom GT into some rarified air. The Bugatti Veyron will roar from 0-200 mph in 24.2 seconds. Before this last test, the previous 0-200 time from the Venom GT was 15.3 seconds. While that tenth of a second doesn’t sound like much, it’s a lot when you are talking a 0-200 mph time.

The 2013 Hennessey Venom GT is built off a modified Lotus Elise/Exige chassis and powered by a General Motors 6.2 liter twin-tubocharged V-8 engine that is also found in the Chevy Corvette ZR1. The company says it has been tested up to 260 mph. What is amazing about this latest test run is that the driver never got the supercar out of 5th gear.

Never got out of 5th gear

Hennessey says the driver took the car up to 7000 rpm, which is close to the top speed in 5th gear. They went on to say, “But we had one more gear to go. And the car﻿ was still pulling as hard in 5th as it is in 3rd.” When asked about the top speed of the supercar, Hennessey said, “Top speed? Maybe﻿ we will find out soon. FYI, 230 mph was achieved in just 4000 ft of runway.”

This car is similar to the Venom GT Spyder they built for Steven Tyler. There are actually three hp settings to choose from, 800 horsepower for cruising, 1000 hp if you need to outgun a Koenibsegg CCx with 806 horsepower, and the mind-numbing 1200 hp setting for blowing away the Bugatti Veyron Super Sport.

The Venom GT, created from a base Lotus Elise/Exige utilizes components like the roof, doors, side glass, windscreen, dash, cockpit, floorpan, HVAC system, wiper and head lamps. The 2013 Venom GT is a Hennessey creation and not associated with Lotus Cars.

What’s even more exciting is that the team at Hennessey has just finished building a new production 2014 Venom GT2 with an incredible 1500 horsepower. The 2014 GT2 gets a larger Chevrolet-sourced 7.0-liter twin turbo V8. All that power will be transferred to the rear wheels via a six-speed manual transmission, and Hennessey will offer an optional seven-speed automatic with paddle shifters that will be able to shift quicker than any human.

The new 2014 Venom GT2 is projected with a top speed of 287 mph. While we haven’t been give a 0-60 sprint time, the new supercar should be lightning quick and will get anyone’s heart pumping. The 2013 Venom GT is incredibly fast, but the 1500 hp 2014 Hennesey Venom GT2 should be an adrenaline rush like nothing else.

There will be only 7 examples of the supercar that will be produced at $1.25 Million each. The new supercar is available for order now with deliveries in late 2013 or﻿ early 2014. We can’t wait for the Hennessey team to take the new 2014 Venom GT2 out and test the traction control system. Stay tuned.