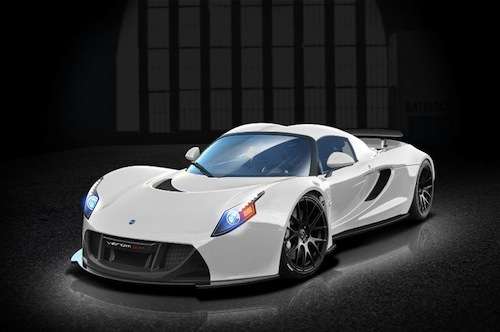 Hennessey Performance has done it again by building the production 2014 Hennessey Venom GT2 that pumps out a mind-numbing 1500 horsepower.
Advertisement

The guys over at Hennessey Performance must not be bored, because they have been busy developing another Venom GT supercar. This is the same team out of Sealy, Texas who built Steven Tyler’s 2013 Venom GT Spyder. This time they’ve taken a Lotus Elise/Exige chassis and built the 2014 Hennessey Venom GT2 that pumps out an incredible 1500 horsepower. If Steven Tyler was thinking about trading in his 2013 model, now would be the time. Tyler’s Venom GT Spyder could only manage to produce 1200 horsepower with a top speed of 260 mph. But the new 2014 Hennessey Venom GT2 will blow that away.

John Hennessey has been making “fast cars faster” since 1991 and knows how to build a supercar that is like no other on the planet. He did it recently by taking a stock 2013 Cadillac CTS-V and building the 1,226 hp Hennessey 2013 Cadillac CTS-V and set a world record 220.5 mph on Texas SH 130 back in October. Now John Hennessey has done it again and is building the production 2014 Venom GT2 that makes the 2013 Venom GT look like child’s play.

The previous model was powered by a General Motors 6.2 liter twin-tubocharged V-8 engine that is also found in the Chevy Corvette ZR1. The 2014 GT2 gets a larger Chevrolet-sourced 7.0-liter twin turbo V8 that will pump out a mind-numbing 1500 horsepower. And to protect the environment, Hennesey says the supercar will even be able to run on E85 pump fuel.

All that power will be transferred to the rear wheels via a six-speed manual transmission, and Hennessey will offer an optional seven-speed automatic with paddle shifters that will be able to shift quicker than any human. Steven Tyler’s 2013 Venom GT had a top speed of 260 mph and the new 2014 Venom GT2 is projected with a top speed of 287 mph. While we haven’t been give a 0-60 sprint time, the new supercar should be lightning quick and will get anyone’s heart pumping.

The new Venom GT2 will be super lightweight and will weight in at 2743 lbs which is an astounding 1.2 bhp per kilogram of curb weight. With that kind of power per kilo, it will be able to blow past the Bugatti Veyron Super Sport. The Hennessey team does it by taking a modified Lotus Elise/Exige chassis and then doing their magic. The 2014 Venom GT2 utilizes components like the roof, doors, side glass, windscreen, dash, cockpit, floorpan, HVAC system, wiper and head lamps. The all-new Venom GT2 is a total creation of Hennessey Performance and is not associated with Lotus Cars.

Outside, the new 2014 model will feature increased headroom with a double bubble roof, and aerodynamic improvements that will include new side mirrors, roof & front airdam. The Venom GT2 will be even slippier than the previous generation model.

Hennessey Performance says the first 2014 Hennessey Venom GT2 will debut late next year and there will be only 7 examples of the supercar that will be produced. If you are one of the lucky seven owners, expect to pay $1.25 Million U.S. and get ready for the ride of your life.