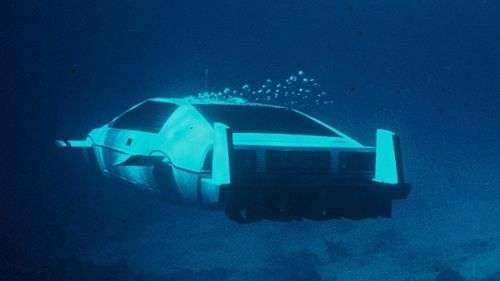 The Lotus Esprit Series 1 featured in the classic James Bond film ‘The Spy Who Loved Me’ will be up for grabs on September 8 courtesy of RM Auctions.
Advertisement

The Sean Connery-driven Aston Martin DB5 featured in Goldfinger and Thunderball may be the most iconic Bond car of all time, but the Lotus Esprit submarine car used in The Spy Who Loved Me isn’t too far behind. And now, thanks to RM Auctions, fans of the film can bid on the vehicle when it’s auctioned off at RM’s upcoming auction held from September 8-9 in London.

Affectionately known as “Wet Nellie,” the Lotus Esprit Series 1 was specifically built for the movie by Perry Oceangraphic in Florida and operated by retired US Navy Seal Don Griffin. According to RM Auctions, the Esprit submarine cost over $100,000 to build in 1977, which is equivalent to roughly $500,000 today. Not your typical movie prop, this vehicle was built as a fully functional submarine and used for actual underwater driving shots.

After filming wrapped, the unique submarine car was sent to Long Island, New York where it remained in storage for ten years. The vehicle was then purchased by a local couple at a blind auction in 1989, and periodically showcased over the past two decades -- including a stint at the Petersen Automotive Museum in Los Angeles.

RM Auctions does not list any bidding estimates, but the rare Lotus should fetch a hefty sum come September. That being said, it will be difficult for it to reach the $4.6 million that RM Auctions sold the original Aston Martin DB5 for in 2010.

Despite having auctioned off some of the rarest cars in the world, Max Girardo, Managing Director of RM Auctions, Europe, said:

“We have a great track record in selling incredible and iconic movie cars, and this particular Lotus is certainly up there amongst the most famous cars of all time. Over the years, millions of moviegoers have stared in awe as the Lotus transformed itself into a submarine, and now, perhaps one of them will have the opportunity to own it. Her Majesty’s Secret Service aside, it surely is the ultimate beach accessory.”

Released in July 1977, The Spy Who Loved Me was the tenth film in the James Bond series and the third to star Roger Moore. The movie centers on Agent 007 investigating the mysterious disappearance of a pair of ballistic-missile submarines.

Visit rmauctions.com for more details on the upcoming London auction and to view a list of other vehicles set to be auctioned off.