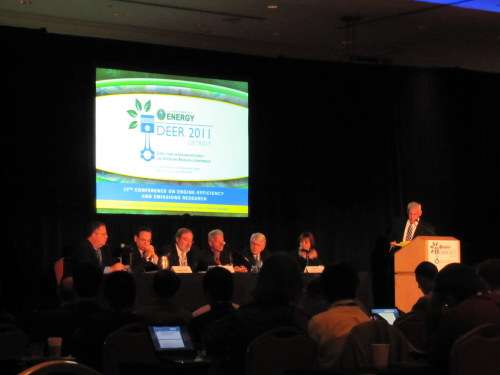 As the High Efficiency Engine Efficiency sessions were completed in two parts at the 2011 DEER Conference in Detroit today, the message about the need for tech synergies became very clear.
Advertisement

Wayne Eckerle, a V.P. of Cummins, said it best in his overview when he told a crowd of engineers and scientists at the opening session of the 2011 DEER Conference that "success in engine efficiency is all about system integration."

That may imply many things, but one thing is certain: multiple technology components working as a system brings about synergies that were unavailable just 5 years ago.

Take for example the simple statistic that large trucks spend at least 19% of their time at idle. That time wastes heat, wastes fuel and costs a lot of money. That also means there are plenty of opportunities and places for improvement, not only in the engine, but in the waste heat recovery, not just multi-valve timing and direct injection.

David Boggs and Jason King of Ricardo, Inc. provided an abstract whereby synergistic technologies are able to achieve high levels of gasoline engine downsizing so as to attain higher fuel economy, lower emissions without sacrificing power due to a higher power density. They even mentioned HyBoost, which is a combination of a downsized gasoline engine, with eboost, eturboing and stop/start.

Companies are even using access to our national laboratories to study the internal dynamics of the combustion chamber where they study elements like laminar flame speed inside a Sandia HD optical engine that uses high-speed cameras to capture actual ignition patterns. I witnessed a few videos where I saw various combinations of fuel intake, various spark ignitions and various flame patterns. This is rocket-like science and physics at its best within the automotive world!

Point is, the internal combustion engine is far from dead. It is being worked on at levels never before witnessed in automotive and truck history. Some are testing dual-fuel systems whereby a both work to deliver the right level of power and emissions. For example, certain high power applications are better using gasoline; whereby low power can use diesel for optimum efficiency; and an intelligent system knows when to deliver the right combination.

Be apprised, though, the challenges are great. There are many areas that engineers and researchers simply do not yet have the answers they want and need to bring engine efficiency past the 50% level.

Yet, despite all the talk about clean diesel, HCCI, RCCI, PCI, natural gas, split cycles and electrification, all agree that the solution may reside in finding the right combination of technologies. Think about it. The needs of the highway are far different than the needs of the stop & go driving in the city. Until now, engineers had the make compromises to attain that middle of the road approach. Now, that road just got wider, as technologies will be used in conjunction with other technologies.

Witness the stop-start. Anytime an engine is not running, it is not polluting nor is it burning fuel. So, engine shut-off makes sense when sitting in traffic, while cylinder cut-off makes sense for highway. Both require similar technology to control the events; but the end result is a vehicle that gets higher mileage in both city and highway. That solution is not the end all, however, as it merely evades efficiency.

Ford seems to be pushing engine downsizing more than other OEMs, using EcoBoost with turbos to make up for the lack of engine volume. The latest is a 3-cylinder 1 liter engine.

Engine efficiency, however, will still have to improve to meet all of our demands. After all, everyone expects fuel sources to remain as ubiquitous as they are now; meaning, gasoline still has a place in our society, at leat until hydrogen and electrification com eof age and become affordable to the masses. That means we’ll simply have to drive the same distance but use a whole lot less fuel in the process.

So, researching engine technologies that change the efficiency is crucial. That is why I was pleased to hear GM’s Alan Taub finally mention the existence of split-cycle engine technology is in the labs. Fact is, Scuderi Engine and Tour Engine are key players in that end of the engine spectrum; and, in my opinion, ahead of the crowd.

Special thanks to Dr. Oded Tour for making me aware of the conference and inviting me; as it provided the venue to at least meet in person. I will cover more on his poster presentation on the Tour Engine split cycle in a separate article.

Be apprised that I was listening to people whose education and intelligence made me feel at times quite less than average. Some presenters were more communicating than others, but that is normal.

Still, it sometimes takes a simpler mind to realize the true nature of what’s going on; and in that respect that would be me. Fact is, I may not understand the mathematical equations enough to make suggestions, but I do see patterns quite well. I suppose that comes from my years reading and divining stock and commodity charts for technical dynamics of price. Point is, there is a ton of work being done with IC engine, both gasoline and diesel, not to mention natural gas.

Second point is, the work is ongoing. Yet, the vast majority of this work is being funded by us simpleton taxpayers in the form of grants via the Department of Energy (DOE). That means they really are working for us. So, lest they brag too much, their next job is dependent on us and our ability to pay taxes.

Now you haven’t lived until you spend some time during a break listening to a bunch of Ph.D. scientists brag about their post doctorate work; and they were uncertain how far they might go. It reminded me of a visit to the Grosse Pointe Yacht Club; more brag, less humanity.

Still, in the end, we are all human; and their work and brains are necessary to help us get to energy independence. Problem is, they will not be the ones making the final choices. It will likely be some bureaucrat with a political agenda with backing from some political party and PAC money; or some president who only understands what he’s told, not what he studies on his own.

Bottom line for me of the 2011 DEER Conference is that progress is being made toward energy efficiency. Just accept the fact that the IC engine is still part of that; and that our energy independence is merely part of the greater good, a viable economy whereby everyone can afford to live.

[Photo by Frank Sherosky, Authorfrank.com for Torque News. Permission was granted at the time of registration]