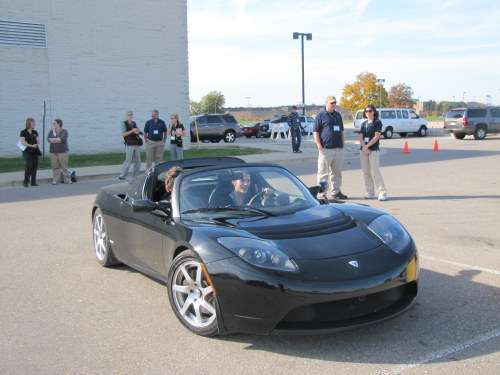 The Business of Plugging In 2011: Media drives EVs at Ride and Drive

The Business of Plugging In 2011, a Center for Automotive Research (CAR) Conference at the Hyatt Regency in Dearborn, Michigan held a Ride and Drive event on October 11 for the media. With representation by Eaton, GE, GM, Ford, Mercedes-Benz-AMP and Tesla, what are the best three combo-words to describe the experience?
Advertisement

The Business of Plugging In (BPI) 2011 was my first visit as a Torque News reporter. International in scope and enterprising in nature, this year’s conference consisted of speaker sessions, an exhibition hall where suppliers show off their capability to the EV industry, and a broad range electric Ride and Drive vehicles.

General Electric (NYSE: GE) and Eaton (NYSE: ETN) were there to charge the vehicles. This was firsthand experience seeing this in action.

Vehicles included in the Ride and Drive were: Tesla Roadster, Ford Transit Electric; Mercedes-Benz AMP Electric; Nissan Leaf; Chevy Volt. All vehicles were 100% electric whereby only electric motors propelled the wheels. The Chevy Volt, however, was the only Plug In Electric Vehicle (PEV) with an IC engine as a generator motor.

When it came to full electric driving range, all vehicles except the Volt had an 80-100 mile capability; and the Nissan Leaf was the only vehicle that availed a plug-in for 480 Volt Level 3 charging. I was told the fast charge would take 30 minutes to get to 80% charge capacity. That was impressive to me!

The Volt only has a 40 mile battery-power range, but the generator motor charges the battery without having to stop. It is the best of both worlds, and it is still full electric drive; meaning the IC engine never drives the wheels directly; hence the name, extended range via the generator engine.

That means I can drive to Traverse City to see my sister without stopping to recharge, as the generator motor does it for me. On the other hand, the Nissan Leaf touted a strong 100 mile driving range, but availed that fast charging capability which can be found on the way by using the navigation tool.

In the words of Richard Krieger, an automotive educational consultant, “I was surprised there were so many charge stations. I had no idea!”

Here’s my video portion of the report:

Michigan has certainly been a busy place for this writer the past five months. It started in early summer with the Detroit 2.011 AutoBeat Insider Conference at the Thomson Hotel in Birmingham, then the MBS 2011 in Traverse City; followed by the DEER 2011 conference at the Hyatt at Detroit‘s Renaissance Center, and now the BPI 2011.

Be sure to check out the photo sets of the BPI 2011 which provide you a view of the conference from y perspective of media day.

Also be sure to read the new article by Armen Hareyan about the latest breaking news on a GM full electric : Chevy Spark to follow Volt and Malibu Eco in 2013, but for select drivers

Frank Sherosky wrote on October 12, 2011 - 1:06pm Permalink
Just heard GM's Joel Ewanick say on CNBC the Spark Electric would be targeted toward California; further saying it's a niche car, and the Volt is what they believe is needed. After driving the Nissan Leaf, I think he's wrong, unless the cost of the Volt comes way down.
Jessica Howell wrote on October 13, 2011 - 9:50am Permalink
"Collaborative-efforts, fast-acceleration and quiet-driving" sums it up quite nicely!