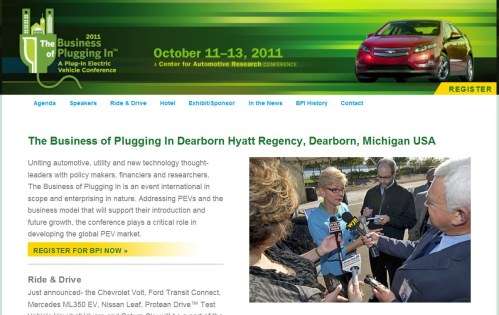 The Business of Plugging In 2011 opens today, focuses on widespread adoption of PEVs with Ride and Drive

The Business of Plugging In 2011, a Plug-in Electric Vehicle Conference will open at the Hyatt Regency in Dearborn, Michigan and runs from October 11 - 13, uniting automotive, utility and new technology thought-leaders with policy makers, financiers and researchers as they focus on widespread adoption of plug-in electric vehicles (PEV). [See updates from Torque News via here and Twitter, especially Ride and Drive report.]
Advertisement

The Business of Plugging In (BPI) is an event international in scope and enterprising in nature. From the role of big box stores like Best Buy to Portland’s electric avenue, speakers at this year’s conference will focus on the long-term growth and widespread consumer adoption of plug-in electric vehicles (PEVs).

For the record, BPI 2011 speakers are the movers and doers making the business of plugging-in a reality.

Michigan has certainly been a busy place for this writer the past two months. It started in mid-summer with the Detroit 2.011 AutoBeat Insider Conference in Birmingham, then the MBS 2011 in Traverse City; followed by the DEER 2011 conference at the Hyatt at Detroit‘s Renaissance Center, and now the BPI 2011.

Point is, this reporter will be on hand to cover the event, take a few photos, record perhaps a few videos and interviews.

If the conference does the right thing and provides WiFi (some like DEER didn‘t), I will update this article at TorqueNews.com

Hope to see you there, but at least visit Torque News for updates.

10/10 News Update: Bob Weed, vice president OEM, for the Copper Development Association (CDA), will be at the Business of Plugging In conference in Dearborn this week. He says he would be happy to talk to me about the value of copper in the development & production of the electric vehicle. So I shall be sure to meet with him and report back.

10/11 Morning Update: Getting ready to leave for Dearborn. Expect to drive the Nissan Leaf, as I already have driven the Chevy Volt. After that, we'll see what else catches my eye, but the exhibitions won't start until 4 p.m. It is, after all, media day.

Ride and Drive will occur directly outside the Hyatt Regency, a media exclusive time on Tuesday (1 – 4:30 p.m.). The event will feature the Chevrolet Volt, the Ford Transit Connect, the AMP Mercedes ML350 EV, Nissan Leaf, and the Tesla Roadster.

Here's a new tid bit of info from the Copper Dev Assoc news release: The average car produced in North America has 50-55 pounds of copper in it. In a hybrid vehicle, the amount will double. In a pure electric car, the amount of copper will triple. So, is that why the price of copper is going up? Stay tuned for another report later.

10/11 Ride and Drive Update: Finally got to drive a Nuissan Leaf. Can you say - QUIET? It look like a very small car on the outside, but very roomie on the inside. Outstanding torque acceleration. About $27K after government (taxpayer) subsidy.

Met with GE on it charging station. Will follow up on that one for sure.

Drove a Ford Transit, too, 100% Electric. Also very impressive nad super quiet. Of course, the cost would hurt the pockebook.

Will now view the exhibition and report later tonight when I return home.