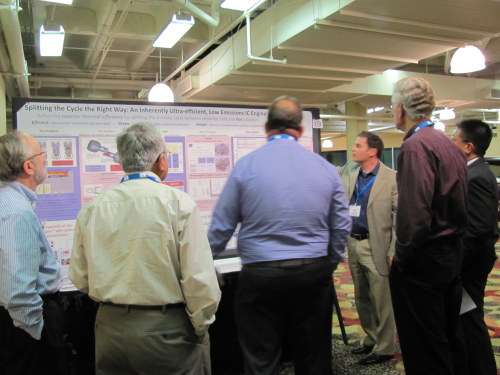 For the second year in a row, Dr. Oded Tour, CEO of Tour Engine presented during poster presentations at the Directions in Energy-Efficiency and Emissions Research (DEER) Conference in Detroit, and garnered a healthy interest, including a visitor from Volvo.
Advertisement

For the Poster Presentation Session - Part 1 of the 2011 DEER Conference in Detroit, 19 presenters were given a 3-5 minute summary before the conference attendees. Those interested in following up were then given an invitation to the adjacent ball room where major suppliers had displays, large and small, of their engine-related technologies. Number 19 of the poster presentations was Dr. Oded Tour of Tour engine.

The title of Dr. Oded Tour’s presentation per the DEER agenda was: Splitting the Cycle the Right Way: An Inherently Ultra-efficient, Low Emissions IC Engine.

For more than a decade, the DEER Conference has been the U.S. Department of Energy's (DOE's) primary mechanism for the public exchange of state-of-the-art advanced combustion engine research and development (R&D); and Tour Engine was there with good reason, because every gallon saved in fuel consumption is a green event.

That is where I came in as correspondent for Torque News, because I was also a guest of Dr. Tour. Having been a design engineer in the auto industry and now as writer covering automotive technologies, I certainly took the opportunity primarily to meet Dr. Tour face to face. For the record, he had already given me a private, one-one-one phone/web presentation a few weeks ago.

It was the same presentation that often goes to venture capitalists, explaining in great detail the design and efficiencies of the Tour engine that bears the name of his father, Hugo Tour of Israel. The poster was a summary of that presentation.

This is not the first time I have reported on the Tour Engine. Read Tour Engine Inc. chosen to display at ARPA-E Innovation Summit 2011

For the record, Dr, Tour is by no means shy in his presentation nor in his beliefs about the benefits of splitting the 4-cycle engine into a cold and hot side.

First, Tour Engine is both a company and a split cycle-cycle engine design that tales the IC engine to what I believe is the next step in its evolution. It literally separates the cold side, (intake-compression) from the hot side (power-exhaust). Furthermore, it has a unique arrangement as being the only split-cycle with opposed pistons; and there is a rational reason as to why - maximum thermal efficiency.

When I finished my own 3-hour review of Tour’s design, it became clear to me that Tour intends to become the most thermally-efficient, internal-combustion engine on the planet; my words, not his.

Fact is, today’s 4-cycle engines waste energy to a great degree, they resist green, and they have become extremely complex. As such, the Tour engine addresses the three with similar terms: efficient, green and simple.

In the words of Dr. Tour, “existing four-stroke engine designs are in conflict with optimization.”

One look at the poster at DEER coupled with Dr. Tour’s explanations and you tend to realize the auto industry is expending great amounts of time and money just to achieve incremental gains of 0.5% here, 1% at best there. Thus the industry has avoided doing what’s necessary, reconfiguring the IC engine so that those gains can be made much larger and achieved in one fell swoop.

At present, all engines use the traditional Otto Cycle or some variation like the Atkinson Cycle and Rankine Cycle, which attempt to achieve some level of efficiency of the Miller Effect. Coming up short, though, on maximizing thermal efficiency, all manufacturers end up making compromises between fuel efficiency, power and emissions. Thus, all use direct injection, turbo charging; others simply vie for variable cams and variable valve timing.

Problem is, the auto industry has approached a point where they will not be able to meet 2016 and 2025 MPG mandates unless a major change is made to increase thermal efficiency.

According to Dr. Tour, existing engine designs allow extreme heat losses that could be used to do work, like propel the car. For example, 40% gets transferred to the radiator, another 30% goes out the tailpipe, and only the remaining 30% is available to power the vehicle.

Tour is not the first to attempt a viable splitting of the cycle. Other designs have attempted the same, but most designs have crossover tubes which tend to reduce the ability to attain maximum thermal efficiency. And that’s where the Tour engine is different and excels. The Tour design, for example, adopts a single head approach with opposed pistons and dual crankshafts, whereby the valves allow for the best thermally efficient way to transfer air from the cold side to the hot side.

There are other engines with opposed piston variations, but they are still traditional Otto cycles or they are two-cycle diesels. None of those take advantage of the split cycle like the Tour engine.

Per the poster display at DEER, the compressor or cold side of the split cycle engine works best when it is cold or thermally insulated from the hot power cylinder. And the Tour design makes every attempt not to deviate from that criteria. Retaining a hot cylinder allows for maximum power and more thorough burning of fuel. But it is the opposed piston-to-piston arrangement that makes the thermal efficiency of the Miller Effect possible.

Details about the valve designs were always held close to the chest, and I respected Dr. Tour’s request for non-disclosure of certain technical details. However, the poster revealed a magnetic valve to control the timing of the transfer from the cold to the hot side. If I got that wrong, I expect Tour to correct me. Point is, greater details about the Tour Split Cycle Engine are coming out.

In fact, I noticed a representative of Volvo had sufficient interest to give Dr. Tour his card, suggesting there may be further communication and possible some development down the road.

Another fact is, Tour Engine is always looking for developmental partners, even promoting venture capital (VC) firms to support the development. Of course, I would not disclose those companies that have signed non-disclosure agreements even if I knew. However, I was pleased to see the interest in split-cycle engine technology is growing; more so than last year and the year before that.

In time, the Tour engine will mature. For example, the beta prototype is scheduled to be built and tested either later this year or the beginning of 2012.

From my own experience with design & build or start-ups and inventions, capital is crucial to achieve the next level of development, regardless of the project. The fact that GM’s Alan Taub gave split cycle credence at the panel session says a lot.

That tells me, contrary to modern belief and all the canned reports by many automotive media types, full electrification as the next wave to maximize automobile efficiency is exaggerated at this time. That means the demise of the internal combustion engine is also extremely exaggerated, especially as split-cycle engine technology comes of age.