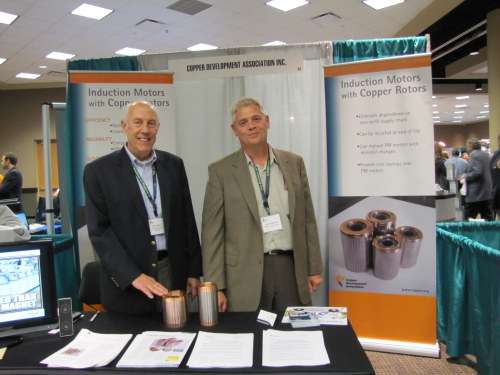 The Copper Development Association did more than just spread the word at The Business of Plugging In 2011 about the value of copper induction motors now used by Tesla Motors in their electric vehicles. It gave new insight to attendees of the Center for Automotive Research (CAR) conference.
Advertisement

The Copper Development Association (CDA) is at the Business of Pluggin IN 2011, a Center for Automotive Research conference in Dearborn, Michigan to spread the word about the value of copper induction motors now used by Tesla Motors in their electric vehicles.

Today, I spoke directly with Bob Weed, CDA vice president OEM, who demonstrated the innovation of the copper motor. If the conference theme this year was cross-industry collaboration, offering attendees the opportunity to discuss the potential for growth and consumer acceptance of PEVs, then it succeeded.

“It’s a perfect opportunity for the CDA to collaborate with engineers and designers as we show how this improved technology will enhance the hybrid and electric vehicle industry,” Weed says. “Copper has always been recognized as the preferred material for conducting electricity, which is why it’s used universally in motor windings.”

1. Copper rotors don’t have a drag loss when the motor turns on and they don’t lose their efficiency during high speed or low torque conditions. This makes them well suited for hybrid and plug-in hybrid vehicles.

2. Copper rotors provide an economic advantage over aluminum rotors. Although the raw material cost for aluminum may be less than copper, the motor with a cast copper rotor can be up to 25% smaller than an equivalent motor with an aluminum rotor. The superior heat conduction of copper also contributes to cost savings.

3. The use of die-cast copper rotors (an improved technology that takes into account copper’s much higher melting temperature than aluminum, for example) provides an efficient, high production process.

Today, Tesla Motors, a leading manufacturer of EVs and EV powertrain components, uses the copper rotor at the core of its vehicle propulsion systems. Tesla’s high-performance copper rotor motor delivers 300 horsepower and weighs only 100 pounds. The stator uses only copper and steel – no rare earth metals are involved.

Tesla chose copper rotor motors because they are “rugged and have lower materials costs” than the rare earth permanent magnet motors, says JB Straubel, chief technical officer for Tesla Motors. “As we transition further from a fossil fuel economy to a renewable energy economy, electric vehicles can be a key piece of that. In a world where we are building millions of electric vehicles, I think the copper rotor induction motor can be the technology of choice to make that happen.”

How Much Copper in an EV?

1. The average car produced in North America has 50-55 pounds of copper in it. In a hybrid vehicle, the amount will double. In a pure electric car, the amount of copper will triple.

2. More than two-thirds of the copper will be found in car’s wiring harness and electrical components.

3. Copper has the highest conductivity of any metal that can be practically used for conveying electricity.

4. Each year in the U.S., nearly as much copper is recovered from recycled material as is derived from newly mined ore.

About the Copper Development Association

The Copper Development Association Inc. is the market development, engineering and information services arm of the copper industry, chartered to enhance and expand markets for copper and its alloys in North America. More information may be found at Copper.org

I hit Mr. Weed with quite a few technical questions, but his explanations about copper satisfied my curiosity. One important factor centers on how we need to look at copper. You cannot isolate it; meaning you have to compare how it contributes to the entire system; in other words a systems approach.

Take for example the rotor. Aluminum is certainly cheaper, but copper provides sufficient current carrying power and heat dissipation even relative to its greater weight to allow for smaller and more powerful motors, especially replacing permanent magnet (PM) motors which rely heavily on rare earth materials. Induction motors (IM) using copper rotors can easily replace them, which is exactly what Tesla did.

The challenge has been the manufacturung process, because copper melts at a much higher temperature, like 1900 degrees, much higher than aluminum which is in the 800-900 degree range. Point is, these motors require die casting, and that was not possible with copper; that is, until the industry solved the problem via a host of intelligent suppliers. Now, copper can be die cast and Tesla can replace expensive PM magnet motors with a material that is in greater supply, copper.

When I asked Mr. Weed about the latest bull market in copper, he said he wouldn't venture into futures prices. However, he did say that China and India growth in the construction arena are likely affecting copper prices more than autos. After all, average use right now is merely 12% while construction is 50-60%.

Nonetheless, if this copper solution for induction motors for EVs ever takes hold, ndit likely will, the increase in volume of copper in an EV says copper is not coming down in price in the future. At least that's my assessment as a futures trader.