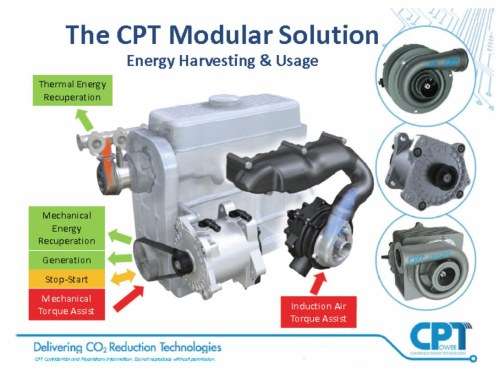 Co-located with The Battery Show and the Automotive Testing Expo, the Engine Expo 2011 provided a platform for Controlled Power Technologies Limited to reveal its modular hybridization solutions to lower CO2 emissions.
Advertisement

Fact is, low CO2 vehicles is an evolving market; and Controlled Power Technologies (CPT) has taken a modular approach so as to be at the forefront; and it appears they are ready for production applications.

As I interviewed Mr. Nick Pascoe, CEO of CPT, I got the impression that his company had a very practical and fast approach to lowering CO2 emissions, rather than just waiting for us folks to come up with more money to buy EVs and hybrids.

There was no hint of any pie-in-the-sky expectations with Pascoe, just real engineering solutions that are evolutionary in the IC engine’s step towards green. Furthermore, most of the technology components are available right now to be integrated by automotive OEMs

His also related a philosophy that said a right balance is one that takes technology and costs into account; not that OEMs do not think of these things. However, the CPT approach is to hybridize the IC engine to improve efficiency at a price that the average driver-owner can afford instead of expensive lithium-ion battery solutions.

I was a bit surprised that he did not jump into a split-cycle engine discussion, though, as that’s where the beef of engine efficiency gains live. Nonetheless, CPT is aware of the slow and steady approach of automakers; and the company is aware that an engine that shuts down does not pollute, and any system that enables a capture of thermal energy has the potential to also reduce CO2..

Starting with induction power assist, we have the electric supercharger as a down-sized engine enabler, which can smooth out and fill in on the lower end of the engine RPM range; in other words, improve the low-speed power transition to high boosting from the turbo chargers used on downsized engines. It even functions at the lower power of 12 volt systems that are used today, but can also handle 24V, 36V and 48V systems.

This currently makes CPT as the provider of the only production-ready 12 volt supercharger available as original equipment for passenger car applications.

When I pressed Pascoe about downsizing and its limits, he was very knowledgeable there, too, and quick with rules of thumb. For example, a 30% downsizing of an engine translates roughly into a 15% reduction in CO2. As a writer, I surely can use that simple relation.

Then the product discussion migrated toward the mechanical toque assist with the stop-start system that uses switched reluctance motor technology, as opposed to the expensive and China-controlled permanent magnet motor-generator. This system is called SpeedStart®

One advantage to a switched reluctance motor for stop-start is the controllability to switch faster from motor to generator and vice versa. According to CPT the time to start the engine is less than 400 milliseconds which makes for greater driving comfort to the driver.

I also learned that Europe is heading toward a 48 volt system which will avail even more power for these stop-start systems. He seemed surprised when I noted that Saturn, where I once worked as a designer, once considered a 36V-42V system in 1986 but had to kill it due to too many obstacles getting products tested to meet government regulations.

When asked about the fundamental details of the CPT system approach, Mr. Pascoe told me that a typical stop-start system lowers CO2 about 4%, but with a CPT system that value jumps to 5%.

It’s strange that we missed going too deep into the last element, the heat recovery, but a another media person from Automotive News showed up right at that moment. So, I delved into that portion on the company website. There I found an exhaust gas energy recovery turbine, recovering 20% of 30% exhaust heat energy or 6%, which could generate 0.5 to 5kW of power generation.

One significant requirement is that this system expects a mature and cost-effective energy storage system. Lithium-ion batteries are too expensive as are ultra-capacitors at this point, but a lower cost lead-acid battery with a high-energy-density cathode would definitely fill the cost containment.

For me, the interview was a learning experience with a very capable CEO that understands his products. I can say that, because not all CEOs are product and tech savvy.

Most modules are ready or near production ready except the exhaust energy recovery. That will extend to 2015, but it is the least of the gains as far as I can see. In fact, this is where the split-cycle engine technology will likely begin to give EGE recovery some competition; although, even a split cycle still has plenty of exhaust heat to recover.

Regarding the energy storage issue for the exhaust energy recovery, I suggest the cathode developed by the Argonne National Laboratory, which has developed for Envia, LG Chem and GM its High Capacity Manganese Rich (HCMR) cathode, a material for advanced batteries that stores more energy per unit of weight than anything else in use today. Read: http://www.torquenews.com/119/gm-and-lg-chem-use-argonnes-patented-cathode-material-technology

Frank Sherosky wrote on October 27, 2011 - 1:58pm Permalink
Just received an email from Rob Palmer of Palmer PR which handles the media and pr for CPT. In the email he stated, "the VTES electric supercharger is available at 48 volts and CPT is the first to achieve this." This will clear up my initial uncertainty on that issue which stated earlier and in the video that it was just 12 volts. So, that means this electric supercharger has voltage and power scalability!

Tesla-Funded Research Reveals One of The Biggest Mysteries of EV Battery
Tesla Tesla Buyer Nets a Whopping $12,000 Discount After Asking for Reduction
END_OF_DOCUMENT_TOKEN_TO_BE_REPLACED