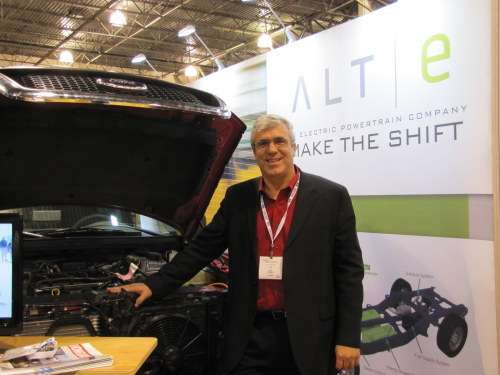 Before there ever was an EcoBoost engine, Ford sold tons of F-150 trucks as fleet vehicles with engines that were far more gas guzzling. Now, ALTe is ready to convert many of those trucks with its proprietary ALTe Green Box as shown at The Battery Show 2011.
Advertisement

Question is, should a company with a fleet of older Ford F-150 trucks discard their old trucks, then buy a new one? Or is the prudent decision to convert it to electric via ALTe’s power train, which, according to ALTe, is the best transitional technology currently available?

Some might believe owners should just convert to natural gas. However, converting a used truck to natural gas does not negate all the miles the engine may have on it. So, the next logical step in that option is to replace the powertrain as well, but with natural gas as the fuel. But wait, there’s more, as you could also buy a new Ford F-150 but convert it to natural gas. Now the cost has really gone up by an even wider margin.

According Jeffrey DeFrank, Co-Founder and CTO of ALTe, converting a used commercial fleet to a full-electric drive with a serial generator motor literally replaces the entire power train, giving it a new lease on life, but one with a major increase in energy efficiency, and at a cost that now looks reasonable.

The Battery Show 2011 in Novi, Michigan was thus an ideal venue for DeFrank and ALTe. When I asked him about specific cost of the conversion, he noted somewhere in the $28K range. I wondered if that will be conistent across vehicles.

Still, comparing that to some new EREV trucks like the one from VIA Motors which I found will cost somewhere in the $79K range, retrofitting looks like a win; of course, VIA is new, not a retrofit, but that’s the point. That cost delta alone makes the payoff for a commercial fleet to convert with the ALTe Green Box to be far less, as it can be measured in as little as 2-4 years, and the payoff for America is still greater with less demand for oil along with a cleaner environment.

Then, right after I wrote to Stephanie Kays (Blue Practice Inc.) who handles pr for my questions, she emailed back with the following: That's about right. ALTe likes to say "Costs for an individual vehicle conversion are projected at around $30,000." Also, depending on the usage model, the number of miles driven and the projected cost of gasoline, payback can be as soon as 12 months.

Mr. DeFrank is no newcomer to alternative energy, which gives this company and this report even greater credibility. In fact, DeFrank utilizes every bit of his 26 years of engineering expertise which covers even the nuclear and mechanical disciplines. Still, considering the EV industry hasn’t been around very long, 11 years of EV/Hybrid expertise, along with complete vehicle development with heavy emphasis on predictive simulation methods makes DeFrank more expert than most. He worked at Ford, MSX, MDI and, to my surprise, Tesla Motors, where he was the Sr. Manager of Vehicle Engineering responsible for 3 vehicles throughout his tenure there.

From this writer’s viewpoint, ALTe is a unique electric powertrain company. Located in Auburn Hills, Michigan, its very name ALTe is a shortened version of the combination of two words: Alternative Energy. Thus the company is dedicated to advancing sustainable mobility by offering practical, well engineered electric and hybrid propulsion system alternatives to the vehicle transportation industry.

Most EREV companies weren’t even around five years ago. Since that time, even more companies are beginning to come out of the woodwork, so to speak, to take advantage of the potential; but retrofitting or converting existing light trucks still on the road seems a no brainer. How crowded it is, I do not know for sure, but if it’s not, I expect it to be in the near future, as the retrofit market is huge.

One problem with retrofitting commercial vehicles is that other technology components are more likely to go, despite having a life expectancy of 10 years.

On a side note about other companies, I ran into my old director from GM, Joe Katona, at the The Battery Show just before I met DeFrank. Since retirement, Joe is Director of Validation, Build and Test for VIA Motors (already noted here), the E-REV company which is about to produce entirely new trucks with electrified power trains. In case you missed the name connection, it is the same company that was started by Bob Lutz.

So, that tells me that Alte is already on a great path, because it targets retrofitting, a niche but a potentially powerful market. Compare its cost to a new truck with an entirely electric/generator motor powertrain. Point: the cost of all-new electrification with a new body/frame is high and not for the faint of pocketbook. Just look at the cost of the Chevy Volt, and it's at the car level.

Realizing that battery cost is still the highest of all the electrification elements, ALTe’s approach is to use the range extended electric powertrain (REEP) in a targeted retrofit situation where availability of retrofitting is huge and thepayback is also large and fast; meaning, there are a lot of vehicles out there waiting to make that transition but cannot afford $79K and more. Using this ALTe solution, ALTe intends to help customers maximize electric miles driven at a lower overall cost, plus with no range anxiety.

Getting back to natural gas for a moment

Realize the main advantage of natural gas over gasoline is its lower fuel cost; plus its conversion is much cheaper over electric. However, it still has a fuel cost that must be accounted. That now means, anytime a commercial fleet has to replace its vehicles entirely, the owners have to address more than the fuel, but the bottom line in terms of total life cost. Good news is, the options are now greater than ever; and ALTe seems to be in the sweet spot of a niche but expanding market, because the OEM manufacturers are concentrating on autos for electric drives, not light to medium duty trucks.

Energy cost point is, the U.S. consumes 19 million barrels of oil a day, making it the world’s largest petroleum user, with China and India on its heels. Yet, despite the U.S. being ranked as the world’s third largest petroleum producer, it still imports 60% of its oil from foreign countries. Ironic, though, between nat-gas and full electricity as an alternate choice, nat-gas is still involved which is cheaper than oil.

Fact is, transforming America’s automobile transportation system from one based on gasoline to one based on electricity will take decades. So, there has to be a transition stage whereby we develop more fuel efficient vehicles with lower emissions that will have a significant positive impact towards achieving our national energy objectives.

Then again, the transition stage has to be cost effective; otherwise it will drag on while the green movement foams at the mouth. So, keep in mind the nat-gas conversion companies can replace entire powertrains, too; and I find that as one of the greatest competitions to light truck electrification.The other is the air hybrid option of the split-cycle engine. More on that later.

Commercial fleet owners may not be the only customers, but are more likely to benefit from operational practices that are unique to fleets, such as high vehicle utilization rates, predictable routing, as well as centralized refueling.

So, after reviewing ALTe’s website and interviewing DeFrank at the Battery Show 2011, I found ALTe with a unique way into this light truck market, through the loophole of retrofitting. After all, there are a lot vehicles out there that are not getting much attention at the moment.

Fact is, there is no Ford F-150 nat-gas out of Ford on any grand scale; neither is the scale grand for GM or Dodge, although they have considered it. Chrysler announced this year about its intentions with hydraulic hybrids. Bottom line is, as of this date there are millions of light trucks on the road that need to be replaced; and in this economic environment, companies are looking at the total cost of its life cycle.

So, should a fleet owner consider only a nat-gas conversion? Or so-called high-efficiency IC engines like Ford’s EcoBoost and GM’s EcoTec, which still do not meet even the level of efficiency to properly compete, let alone the 50% plus efficiency of the split-cycle engine? For the record, this writer thinks OEM IC engines have a long way to go, needing to learn to split the cycles like the Scuderi Engine and the Tour Engine to be competitive at least on the efficiency scale; plus the cost is far less as split-cycle engines have air-hybrid capability.

In the meantime, ALTe is a company that has taken the bulls by the horn and is ready to deliver an electrification conversion product that gives commercial fleets new lives with reasonable payback, because it is a fully retrofitted powertrain, not a totally new vehicle, new body, etc.; but one that implies lower up-front cost than new electric

After all, when it comes to business, it’s not the newness of the body that counts, but the powertrain and its efficient use of fuel that delivers most toward the bottom line. As a day trader/investor, I see those elements affecting stock prices all the time.

Furthermore, everyone, including T. Boone Pickens, knows that commercial fleets and major trucks burn more fuel than all of the automobiles put together; and light trucks are also part of that segment, but due to their lesser weight than heavy trucks, are virtually at the crossroads of electrification vs. nat-gas vs. air and hydraulic hybrids. So, ALTe is targeting the one, untapped market segment that it believes has the potential to give us the greatest bang for the investment buck.

According to ALTe’s website, the management team shares a common vision: “Advancing sustainable mobility.” It is comprised of a group of talented automobile engineers with extensive experience at leading OEMs and suppliers worldwide and in Silicon Valley.

When I asked DeFrank specifically about extending its market reach toward GM and Dodge RAM trucks, he noted that right now ALTe is focused on the Ford F-150 model but they're looking at different types of niche vehicles in the future as well. From their sales pamphlet, I read vehicles such as limos, taxis and delivery trucks.

For more information, you may visit their website, www.ALTeLLC.com