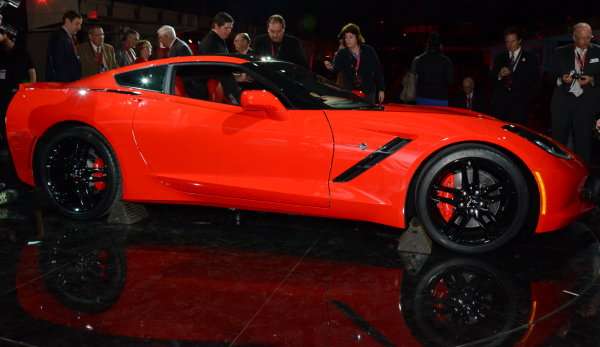 The jurors from the North American Car and Truck/SUV of the Year awards have announced their finalists for each category and with three of the six vehicles in the running for the top honors – General Motors finds themselves the odds-on favorite to win at least one of the awards.
Advertisement

The group of journalists responsible for the 2014 North American Car and Truck/SUV of the Year announced their full list of nominees back in July and out of those first 47 cars, trucks and SUVs, 9 of them were from General Motors – making them the early favorites to take home at least one of the big awards. When the short list was announced in October, that list of 47 had shrunken down to 24 cars, trucks and SUVs with 6 of those being General Motors’ vehicles. Now that the three finalists from each category have been announced, GM’s share of the list has grown from 25% to 50% as 3 of the 6 finalists were penned in the Detroit Renaissance Center.

While the 2014 Mazda 3 is a very good car, it should have a hard time beating the new Cadillac CTS and the new Corvette Stingray. The Corvette enters the market as one of the greatest American performance cars of all time and as soon as it was introduced as a future model this past January, it was a global legend before one ever touched the street. The Stingray is a giant killer that will beat some of the best performance cars in the world with a price that makes it cheaper than many of the cars that it will crush. Unfortunately, the Corvette Stingray applies to a very limited market and it seems unlikely that the jury would pick a car that will be sold in such relatively low volumes. On the other hand, the 2014 Cadillac CTS hits the market as one of the ultimate luxury cars sold in the world and it will almost certainly help the Cadillac brand exhibit a boom in sales when it hits dealerships in full force - especially with its high performance engine lineup.

If I had to guess, I would expect that the Cadillac CTS will be named the 2014 North American Car of the Year.

Over in the truck and SUV category, we have the redesigned 2014 Chevrolet Silverado, the Acura MDX and the controversial new Jeep Cherokee. The MDX is a great vehicle but it seems like a real dark horse as it goes head to head with two vehicles that will most certainly be very popular with the North American buyers. The Chevrolet Silverado has a new look, a vastly improved interior and a drivetrain lineup that offers impressive performance and efficiency. The Silverado also has generations of pickup truck experience that went into making this the best Chevy truck ever. On the other hand, the new Jeep Cherokee was introduced to very mixed reviews due to the strikingly unique exterior styling that has proven to be a “love or hate” design. Fortunately for the Cherokee, the versatility of this new small SUV with a variety of different all wheel drive systems, an efficient new Pentastar V6 engine and the industry’s first 9-speed automatic transmission makes this a great vehicle – with generations of Jeep experience going into this unusual looking SUV.

I expect a tough fight between the Chevrolet Silverado and the Jeep Cherokee but I am guessing that the Jeep will pull out the big win.

Keith Griffin wrote on December 12, 2013 - 5:26am Permalink
I wonder if having two GM products going head to head ultimately hurts them? I'd love to see the Mazda3 win simply because it's a car most Americans can afford to drive - something you can't say about CTS or Stingray. Neither has wide market attainability. Then again NACTOY judges aren't always to read. This could all come down to which OEM works hardest in the next week or so plying the judges with love and affection!
Doug S wrote on January 25, 2014 - 12:39pm Permalink
The C7 corvette is a techo wonder of the 21 century well optioned for a mere $52k plus local taxes. Its not a mass market vehicle but up and coming 40 yr olds will now be able to buy one while their hair has no grey and still raise a family. Whats so special about the Madza 3 vs all the other mass market grocery getters? The choices are all over the planet in this segment. Now you get to a vehicle like the C7 and you have few choices in the price segment. Its a amazing 455 hp vehicle that returns 29 mpg and has 4 different lightweight materials in its manufacture. The Madza 3 will eventually hit the junk yardlike all the other mass market plain vanilla go to the grocery store vehicles but the new C7 will be here for the millennia.