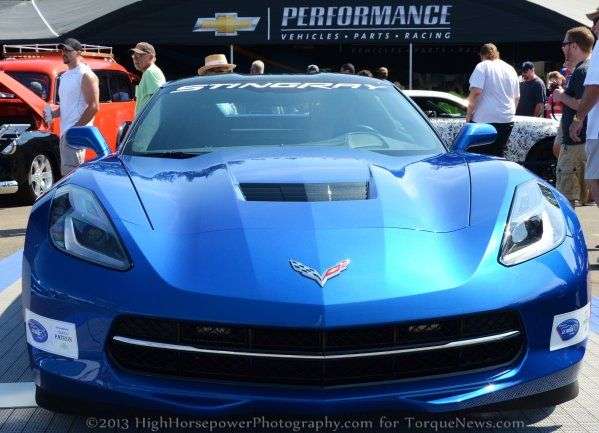 A recent report indicates that the Chevrolet Corvette Stingray will soon come equipped with an all new 8-speed automatic transmission that will make the C7 Corvette even more efficient while also improving the performance capabilities of this self-shifting Chevy sports car – likely making the best performing “base” Corvette of all time even better.
Advertisement

The addition of an 8-speed automatic transmission to the option list of the Chevrolet Corvette Stingray will draw attention for a variety of reasons with the most significant difference being improved fuel economy. The 6th, 7th and 8th gears will likely all serve as overdrive gears with an extremely high drive ratio so when cruising at speeds, the Corvette engine is operating at much lower RPMs and that leads to better fuel economy. The addition of the extra gears not only allows for far less aggressive gearing on the top end but it also allows engineers to give lower end gears more aggressive ratios for stronger acceleration while also having much smaller steps between each gear. For example, with an old school 3-speed automatic transmission, since there were only three speeds, the engineers were limited on just how aggressively they could set each gear and with a bigger jump in ratio from gear to gear – performance would suffer.

In short, this new 8-speed automatic transmission will allow for better low end acceleration, improved fuel economy (especially on the highway) and less RPM drop from gear to gear which helps keep the engine at its optimal operating range in the future Corvette.

Even though drivers of the 8-speed automatic equipped Corvette Stingray will find themselves shifting more frequently than those folks with the 2014 Stingray fitted with the 6-speed automatic, the improvements in pretty much every category well make the extra push of the steering wheel mounted shift paddles well worth the “trouble”. Also, the close ratio 8-speed will make shifts less pronounced when the car is left to shift on its own so the future Corvette Stingray will offer a smoother, more comfortable ride under calmer driving situations.

Making those self-shifting Corvettes more efficient and better performing may not steal sales from the Stingrays with a proper manual transmission but a faster, fuel-friendlier automatic Corvette could help attract even more buyers.

This story about the 8-Speed Transmission Chevrolet Corvette Stingray is updated on May 18, 2018.

John Goreham wrote on December 10, 2013 - 4:22pm Permalink
An often forgotten advantage of torque converter type transmissions is that they are much lighter than dual clutch transmissions. They also generally have better step off feel. In other words, when you are at idle and then move to accelerate they are all set to go. Something some DCTs struggle with. Having driven the stick shift Stingray (with the cool rev matching) I would get the automatic for sure. In big muscle cars I find stick shifts to be clunky and odd. In little sportsters like Miatas they are much more enjoyable. Plus, 1-4 skip shifting (yup, still there) is just wrong in a stick shift car.