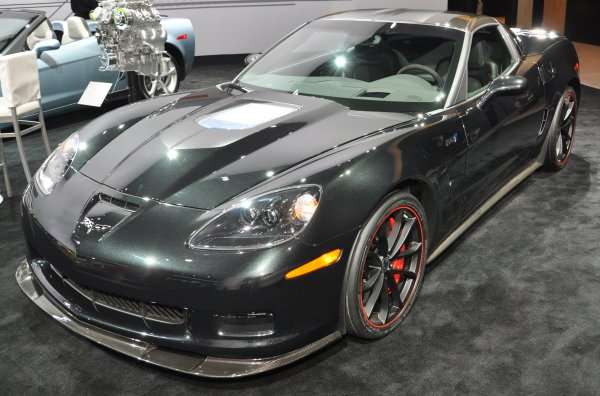 While we were busy swooning over the first teaser image of the 2015 Chevrolet Corvette Z06 that General Motors issued early last week, we almost missed a key bit of wording that leads me to believe that the company doesn’t intend to build a C7 ZR1 – meaning that the next generation Z06 would replace both the previous Z06 and the more powerful ZR1.
Advertisement

The second sentence of the press release announcing the intended debut of the 2015 Chevrolet Corvette Z06 proclaimed that this new model will “complete Chevrolet’s performance car lineup” as it joins up with the other new performance models including the 2014 Corvette Stingray, the 2014 Camaro Z/28 and the new SS Performance sedan. Stating that the new Z06 will “complete” the performance lineup suggests that there isnt anything else coming to that group in the near future and – in a roundabout way – suggests that there is no Corvette ZR1 on the way.

You might be asking yourself why General Motors would considering “stopping” with the 2015 Chevrolet Corvette Z06 whereas the C6 Corvette had the Z06 as somewhat of a “midlevel” package while the ZR1 was the top of the line. Rumors around the automotive water cooler lean towards the idea that the 2015 Corvette Z06 will offer somewhere in the area of 650 horsepower from the supercharged LT4 engine that was leaked on Instagram last week. With 650 horsepower on tap, the 2015 Z06 would pack 19 more horsepower than the C6 ZR1 and if the Z06 features a similar 7-speed manual transmission and Magnetic Selective Ride Control system as the base 2014 Corvette Stingray. Also, the press release containing the first teaser image suggested that there will be unique chassis appointments which could be some of the magnesium goodies similar to those found in the C6 ZR1.

The C7 Z06 could pack 650 supercharged horsepower sent to the rear wheels through a 7-speed manual transmission with a lightweight chassis, a super aerodynamic body package and Magnetic suspension system. The C6 ZR1 is a 631 horsepower supercharged beast with a 6-speed manual transmission, a lightweight chassis, an aerodynamic body and a high tech suspension setup. In short, the Z06 will very likely meet or exceed every qualifying point that made the ZR1 the best Corvette on the market during the 6th generation so there really isn’t any space for the ZR1.

Should all of those expectations (which are based predominantly on rumors and speculation) be true, the 2015 Corvette Z06 will not just be the best Corvette ever but it will also contend with almost any sports car sold in the world – and that includes European supercars that cost 10 times more than the base Corvette Stingray. Provided that the new Z06 is just as incredible as we all expect, this new Corvette will very likely beat almost any car sold in the world so there just wont be a need for a more powerful version of the C7 Corvette.

Of course, even if the 2015 Chevrolet Corvette Z06 comes out of the gate in such an incredible manner as to seemingly kill the need for the mighty ZR1, GM will likely keep the ZR1 name in their pocket for a model down the road…similar to what they did with the previous generation. If that new Z06 is truly that good, it could take GM a couple years to work up a higher performance version and that gap could lead the company away from the ZR1 name.

Can everyone say…C7 Corvette Blue Devil? That name never showed up during the 6th generation Corvette but maybe the C7 will finally bring that long-rumored super-Vette into reality. Or maybe General Motors will introduce the Z06 as the ultimate Corvette and just keep that as the top of the line GM sports car for a handful of years until they have a real reason to build a 700 horsepower factory Corvette.

Auto Motive wrote on December 10, 2013 - 12:22pm Permalink
The z will cost $100k and a fully optioned one at $110k. Now we have the ZR1 and it could cost over $125k base model. At which point does GM turn as did SRT with the expensive over produced Viper. If the ZR1 comes with a 700 hp engine choice then its marketable. Keep the Z with 600 hp and both will be a winner. Hell the base vette at $52k is the best bargain of the 21st century.