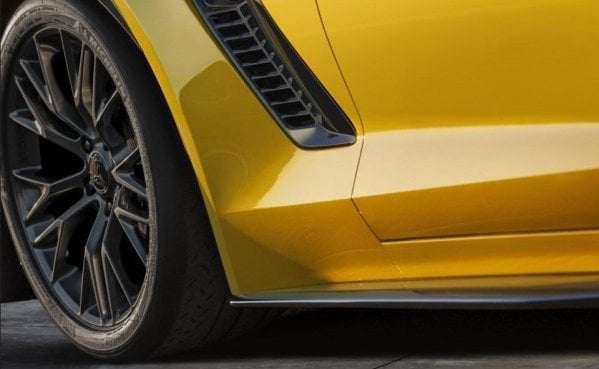 General Motors announced this morning that the 2015 Chevrolet Corvette Z06 will make its debut at the 2014 North American International Auto Show in January and when it does, the Detroit show goers will meet what GM is calling the most track capable Corvette ever – which is a big claim from such a long line of incredible performance cars.
Advertisement

While the attention of the performance world is holding its breath as we all eagerly anticipate the debut of the 2015 Ford Mustang, General Motors stole some attention today with the announcement that the 2015 Chevrolet Corvette Z06 will debut at the 2014 North American International Auto Show in Detroit. No real information has been offered on the 2015 Corvette Z06 other than the fact that it will debut in January and that “It will be the most track-capable Corvette ever”. That is a serious claim as the C7 Z06 will have to stand up to some serious Chevy sports cars wearing the crossed flags over the past 5 decades with the most significant models being the previous Corvette Z06 and ZR1 but with that one simple comment – the 2015 Corvette Z06 has some very big shoes to fill.

All we know of the 2015 Chevrolet Corvette Z06 is what we can see in the teaser shown above and that the Z06 will offer “unique powertrain, chassis and aerodynamic features.” What does that mean? Well, first off we can expect to see some modifications to the exterior that give the 2015 Z06 a more aggressive look while also improving the aerodynamics of the already slippery Corvette Stingray. In terms of chassis components, the 2015 Z06 may opt for some ultra lightweight magnesium goodies under the car that reduce weight without reducing structural rigidity. Finally, in terms of the powertrain changes, GM could go a variety of different directions. First, the company could continue on with the 505 horsepower LS7 engine that powers the C6 Z06 and the 2014 Chevrolet Camaro Z/28. Next, the 2015 Z06 could call upon a tuned up version of the LT1 V8 featured in the 2014 Corvette Stingray with a power output north of the 505hp offered under the hood of the C6 Z06. This engine could literally be a more powerful LT1 or it could get a new name such as LT3 or LT4 (or pick any other number) along with a new displacement but avoiding forced induction. Finally, there could be a new forced induction version of the new LT1 architecture that would almost certainly have a new name - perhaps packing twin turbos.

Regardless of what makes the 2015 Chevrolet Corvette Z06 unique from the 2014 Corvette Stingray, we can expect that it will likely be another one of the most powerful factory built Corvettes ever. The new “base” Corvette Stingray is the most powerful and best performing of the entry level (non-Z06, non-ZR1, etc) Corvettes of all time and the 2015 Z06 promises to best any other model before it. Just to be clear, being the most track capable Corvette of all time would mean that the 2015 Z06 would be able to take down the 2013 Corvette ZR1 which set a Nürburgring record of 7:19.63. For comparison, the previous Z06 turned in a best time of 7:22.68 on the massive course so if the next generation Corvette is really going to be the best, it will need to be about 4 seconds faster around “The Ring” than the C6 Z06.

"Chevrolet is America's favorite performance car brand, and for 2014 we are going to offer enthusiasts more choices than ever before," said Alan Batey, senior vice-president, Global Chevrolet. "No other manufacturer will be able to match the breath of performance cars from Chevrolet."

If I had to guess, I would expect that the 2015 Chevrolet Corvette Z06 would feature a unique hood and front fascia, presumably made out of lightweight carbon fiber. We can see in the image above that there will be a lower rocket extension and I would expect that the back end would also get some “sporting up”, with an aggressive lower diffuser and perhaps a low profile spoiler of some sort. I expect a forced induction version of the LT1 with a manual transmission and maybe an optional dual clutch transmission with the power sitting somewhere in the range of 550 horsepower. Based on the head to head comparisons between the 2014 Stingray and the 2014 SRT Viper, it seems that adding an extra hundred horsepower might be exactly what GM needs to beat down the far more expensive rival from Chrysler.

In just over a month, we will know for sure.