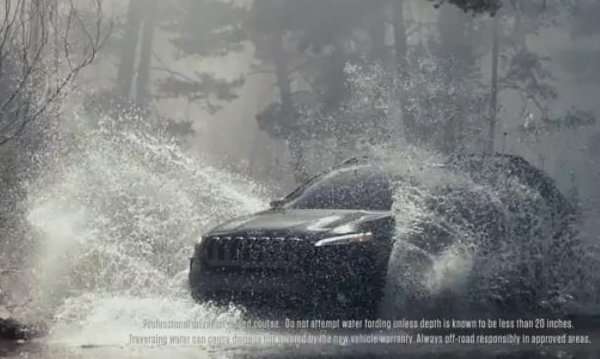 The 2014 Jeep Cherokee finally began reaching dealerships last week and with the first units becoming available for purchase around the country, the Chrysler Group has launched the new “Built Free” advertising campaign for the new Cherokee with a 60 second television spot that debuts today.
Advertisement

The tip of the 2014 Jeep Cherokee marketing iceberg is a 60 second television commercial that will debut across both broadcast and cable television channels including ABC, NBC, CBS, FOX, ESPN, TNT, the Big Ten Network, NBC Sports, Fox Sports One and NBA TV on some of the most watched shows and sporting broadcasts available – helping to put this quick moving commercial in front of a great many people.

“The Jeep brand has a rich history steeped in the unrelenting pursuit of freedom,” said Olivier Francois, Chief Marketing Officer, Chrysler Group LLC. “The return of the Jeep Cherokee and the ‘Built Free’ campaign serves as a reminder that we can fulfill our daily responsibilities and still follow our innate desire to explore new and different experiences.”

Unlike conventional automotive television advertisements that talk about the features of the vehicle or the things that the vehicle can help you do, the first 2014 Jeep Cherokee ad really doesn’t mention the vehicle at all. Instead, the first Cherokee ad is a heavily visual piece featuring a voiceover guy who is talking about how we all meet the world and then learn about the world. Throughout the video, there are subliminal messages with well timed wording, scenic views and quick glimpses of the 2014 Cherokee. Things like “see more” and “do more” are emphasized by the narrator while being accompanied by visually striking images showing the Cherokee driving off in the distance. This commercial doesn’t tell you that the 2014 Jeep Cherokee can go all of these places, instead showing something that many people would (in theory) like to do with the Cherokee in action so if you wanted to go to these places – the Cherokee can get you there.

“The return of the Cherokee nameplate to the Jeep brand brings with it the opportunity for consumers to experience an exciting vehicle that will move the midsize SUV segment forward,” said Mike Manley, President and CEO Jeep Brand, Chrysler Group LLC. “Whatever path consumers choose to follow, they can be assured that the all-new Jeep Cherokee will provide them with the craftsmanship, technology, safety, ride and handling and efficiency that modern living requires.”

I find this to be an interesting approach considering the fuss created by the design direction of the 2014 Cherokee. While it has its obvious Jeep cues, the look of the new Cherokee is unlike anything else from the brand or anything else on the market today. In other words, lots of people don’t like how the Cherokee looks but this new midsized SUV is greater than the sum of its parts with features like an advanced all wheel drive system, a new 3.2L Pentastar V6 and a 9-speed automatic transmission that should all work together to offer Jeep capability and incredible fuel economy. The 2014 Cherokee has lots of things to talk about in an average car commercial but Chrysler has decided to go a non-traditional route which almost seems fitting up this non-traditional Jeep.

carrotworm wrote on October 29, 2013 - 3:07pm Permalink
Looks like they totally ripped off the Toyota 4Runner campaign, but less successfully.
Want to know wrote on December 16, 2013 - 12:41am Permalink
What about the safely brake collision system? Will it stop automatic when going into a sudden impact? Will it stop like a foot away from the back of the car?