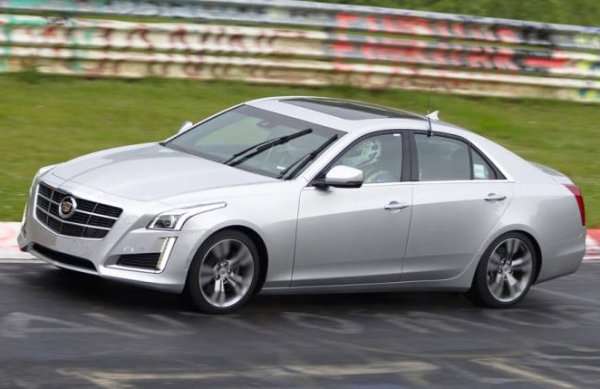 The Cadillac CTS VSport Runs the Ring in 8:14 (Video)

General Motors issued a video last night offering some clips of the new Cadillac CTS VSport in action at the famed Nürburgring with a best lap time of 8 minutes and 14.1 seconds – putting the twin turbocharged midsize sedan amongst some impressive company.
Advertisement

General Motors makes no bones about the fact that there has been heavy testing of their newest Cadillac models on the Nürburgring as there have been plenty of spy shots and official company material showing the test of both the compact ATS and the midsized CTS. However, this newest short video showing the high performance 2014 Cadillac CTS VSport in action at the famed German race track is the first to offer up a lap time.

According to General Motors, the 2014 Cadillac CTS VSport covered the 12.9 mile course just 8:14.1. That time is about 15 seconds slower than the outgoing generation CTS-V but it is almost 6 seconds faster than the original CTS-V sedan. It should be noted that the 2014 CTS VSport is powered by a 3.6L twin turbo V6 while the previous generation CTS-V packed a supercharged 6.2L V8 while the version before that (which was slower around the Ring than the 2014 CTS VSport) was powered by a 6.0L V8.
"The Nürburgring’s extreme conditions allow us to push cars to the limits of stability, steering, braking, ride and handling," said Dave Leone, CTS executive chief engineer, Performance Luxury Vehicles. "The new CTS models had a lot to live up to considering the nameplate's history of outstanding performance, and we were not disappointed."

While it is very impressive that the new V6 powered 2014 Cadillac CTS VSport was able to place itself soundly among the previous V8 powered CTS-V sedans, what is more impressive is some of the vehicles that the new VSport sedan beat around the Nürburgring. While there are a great many older vehicles on the list that have since been replaced by newer, more powerful models like the 2009 Porsche Cayman S and Boxter S with times of 8:16 and 8:17 respectively, there are some very recent performance cars that are heavily respected in the racing world that failed to turn in a better time than the new CTS VSport. With a time of 8:15, the BMW 1 Series M Coupe failed to best the big Caddy and with a time of 8:20, the Chevrolet Camaro SS also wouldn’t have been able to keep up with the newest high performance Cadillac midsized sedan. While that Camaro time was recorded by Edmunds back in 2010, not much has changed performance wise with the SS package since its debut so even a 2014 Camaro SS might have a hard time closing that 6 second gap on the Ring.

"The new CTS was an absolute riot to drive on the Ring," said Cadillac vehicle dynamics performance engineer Kevin Zelenka. "It's more athletic and refined, and the VSport proved extremely capable. If a car performs well on the Ring, it will perform well on any road in the world."

Just to be clear, the new Cadillac CTS VSport is not the modern replacement for the previous generation CTS-V and it is expected that General Motors will eventually roll out an even higher performance V model (without the Sport) in the near future. We would fully expect that monster to pack an even more powerful motor than the 556 horsepower LSA V8 from the previous CTS-V – possibly a forced induction version of the new LT1 V8 in the 2014 Chevrolet Corvette Stingray. Whatever powers the next generation CTS V sedan will surely allow it to lap the Nürburgring in well under 8 minutes but it will likely also cost upwards of $70,000. However, those who want a little lighter hit on the bank account but who still want a roomy sedan that will beat the Camaro SS around the world’s most famous race track can turn to the soon-to-arrive 2014 Cadillac CTS VSport.

LG's New EV Battery Plant Is a Welcome News for Tesla
Tesla Giga Berlin's New Hurdle: It's Not Only the Gov't, but Now Tesla Itself
END_OF_DOCUMENT_TOKEN_TO_BE_REPLACED