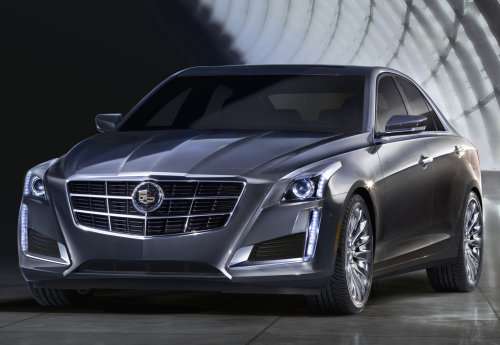 The 2014 Cadillac CTS base model starts at $46,025 (including the $925 destination fee) and that is $6,035 more than the base price of the current 2013 model year CTS. Frankly, the price increase is going to come as a big shock to some prospective buyers but when you consider the pricing of the BMW 5 Series with which it hopes to compete – the new CTS is still a bargain. For example, the 2013 BMW 528i with 240 horsepower starts at $48,725. While GM hasn’t specified which engine will be standard for the 2014 CTS, both the turbocharged 4-cylinder and the naturally aspirated 3.6L V6 offer quite a bit more power than the 528i while still costing $2,700 less.

Further pricing details were limited but GM verified today that the 2014 Cadillac CTS will be available in four trimlines – Standard, Luxury, Performance and Premium. The $46,025 base price applies to the Standard model with rear wheel drive and possibly the 272 horsepower turbocharged 2.0L 4-cylinder engine although there will also be an optional naturally aspirated V6 with at least 321 horsepower. Both engines and all wheel drive will be available across the entire model range while features like front Brembo brakes, Magnetic Ride Control (for models with 18 inch alloy wheels), a Bose premium sound system with 11 speakers and the Cadillac CUE system are all standard on all models.

Of course, on top of those performance figures, the 2014 Cadillac CTS improves on the current model with a longer, lower frame that adds interior space without diminishing head room for everyone. More importantly, this new CTS is 244 pounds lighter than the outgoing model and less weights equals better performance and improved fuel economy. These new dimensions should allow the CTS to better compete with the likes of the BMW 5 Series in terms of space while all of the standard features will allow it to also compete in terms of overall luxury.

“CTS has always been Cadillac’s centerpiece, and as our brand expands and elevates the car properly grows to its true place” said David Leone, CTS executive chief engineer. “With last year’s addition of the award-winning ATS compact luxury sedan, CTS will directly challenge the luxury midsize competition with uncompromised performance, luxury and technology.”

In addition to the base pricing and some of the optional items for the 2014 Cadillac CTS, GM also announced the pricing for the high performance CTS VSport models. This 420 horsepower sedan packs a twin turbocharged version of the 3.6L V6, an 8-speed automatic transmission and rear wheel drive with limited slip differential with a price of $59,995 with destination. The $63,000 BMW 550i “only” has 400 horsepower with its twin turbo V8 so as was the case with the base models – the premium level 2014 CTS should also best the premium level 5 Series (non-M, of course) in both price and performance.

The CTS VSport also features a unique track mode that offers a uniquely aggressive Magnetic Ride Control system calibration and better throttle response for optimal performance. While the power does not compare to the output of the current 2013 CTS-V, the 2014 CTS VSport could offer similar handling capabilities and a still-impressive level of power for more than $5,000 less than the current CTS-V. We still expect a new CTS-V sedan in the not so distant future but those who want just a little more performance out of their 2014 CTS will most likely love the more cost effective 2014 VSport.

Elon Makes a Cybertruck Statement With an Action, But Quiet in Words
Tesla's Record Month in China: Doubled Registrations in March 2021
END_OF_DOCUMENT_TOKEN_TO_BE_REPLACED