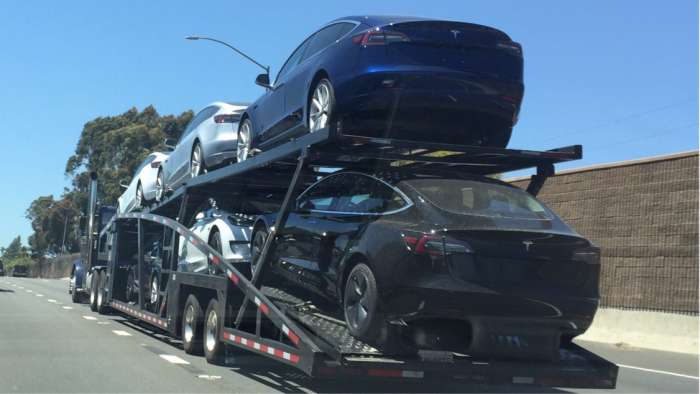 From The Production Hell to Logistics Hell: the Model 3 Car Carrier Crisis During Rush Week

It seems Tesla Corporation has another crisis at hand that they seem able to, in the end, solve one way or another, their way of course, and this time in the opposite of extremes. They are up to their necks with Model 3’s all around them that they can’t deliver them to customers on time. Actually because of either apparent poor planning or lack of a good relationship with several transportation companies to plan ahead, Tesla fabricates its own car carriers so they can ship their inventory.
Advertisement

As Tesla Corporation is steady as she goes with churning out approximately 4,000 Model 3’s per week at last count, a new problem has presented itself for the electric car and energy company. With “Production Hell” seemingly behind them, for now, they seem to haphazardly paid a visit to “Logistics Hell,” “Production Hell’s” next door neighbor, to invite them in. So dealing with problems of scale, Tesla goes from the extreme of not making enough cars, to having too many around when they’re fully assembled, that they are now not being delivered to customers on time. The last week of September becomes crucial for them, as that’s also the last week of the third quarter, where they’re expecting record profits. So the final push has left them short on transportation equipment to move inventory. And if they aren’t careful resolving this, this may lead to a serious bottleneck, between now and next quarter, the same kind of bottleneck last year with supply issues with the assembly process, that could cause them to cut or stop assembly if they run out of room:

As the final week of September coincides with the end of the third quarter, Tesla suddenly finds itself in a race against time to deliver as many cars as it can pulling out all the stops, and doing what it has to do. During this time period which they call Rush Week, Tesla is doing all they can to enhance that crucial soon to come bottom line for the third quarter. This is a key quarter for Tesla, not only to prove that they’re getting their production issues behind them, but that they can be a profitable operation with the right production figures. Tesla is poised to have its most profitable quarter in its history. As Musk recently wrote in a company letter to employees, “We are about to have the most amazing quarter in our history, building and delivering more than twice as many cars as we did last quarter.” But with production issues out of the way, at least for now, the obstacles Tesla now faces are more about logistics than they are about production. In the one week rush to deliver as many cars as they can to help that bottom line for the quarter, Tesla has a new problem of not being able to deliver all these cars to customers, not just on time, but at all.

@elonmusk Leased a Model S for two years in 2016. Have a day one reservation for a M3 AWD. Placed order at end of June. Still don't have M3 AWD. Lease ends in one week! New customers getting M3 AWD before me? No help from Tesla. I helped keep the lights on at Tesla! Please help? pic.twitter.com/grMvFwJMdm

During the assembly process Tesla makes several examples of various variants in bundles, some to satisfy custom orders, the rest to have as available inventory to flip and make a quick buck. It doesn’t help for anticipating customers to see Tesla doing these programs to boost sales and get new owners into off the rack cars many never intended to buy, when waitlisters were on top of the waitlist and still haven’t received their cars. In a conversation on Twitter between Tesla CEO Elon Musk and several still waiting customers for their Model 3 delivery, Musk revealed that the company started building their own car carriers in order to prevent bottlenecks in the customer delivery process, that if not careful, that could jeopardize the assembly process, thus jeopardize the entire production line. With a record profitable quarter expected, Tesla seems to be holding the line at about 4,000 cars on average per week. But having newly assembled cars laying around the lots by the factory and at staging areas nearby or further, when even newer assembled cars could be stored there in their place, doesn’t help this logistics situation. So Tesla’s solution is if they can’t find the car carriers they need, they’ll make them for themselves.

Apologies, we’re upgrading our logistics system, but running into an extreme shortage of car carrier trailers. Started building our own car carriers this weekend to alleviate load.

About the Car Carriers

Another reason why Tesla needs car carriers now is because they are a slave to a circumstance that presented itself in a unique situation they weren’t anticipating or prepared for, similar to the tent dynamic. Unlike the good relationships Tesla keeps with their worldwide suppliers for the parts for them to make cells around the lithium ion batteries and the pack themselves, Tesla doesn’t have that kind of relationship with trucking companies shipping their inventories, at least not yet, because they haven’t shipped these many cars ever. Our colleagues over at Jalopnik asked Guy Young, General Manager of the Auto Haulers Association of America if Elon was correct about there being a car carrier shortage. They conveyed his reply like this:

“Young did have a possible explanation about what may be going on with Tesla. Essentially, Young suggested that the issues may not be about an actual shortage of auto haulers, but a lack of planning on Tesla’s part. It’s possible, Young speculated, that Tesla had not taken the time to establish their relationships with auto haulers early enough, and are now finding themselves in a position where they’re unable to get car carriers to meet their desired timetables.”

It is unknown how many carriers Tesla needs and how many will be eventually built, in total. The prototype Semis were not mentioned if they will participate in this operation, and between their obligations on tour showing themselves to Tesla’s soon to be most valued commercial customers interested in buying them, and their steady jobs working the Gigafactory route shipping supplies and batteries to and from Fremont that’s part of their testing phase, it’s doubtful they will. Semis go into production as early as later next year 2019, probably early 2020.

Since Tesla is a motor vehicle manufacturer and parts maker, that puts them on a fast track and gives them lots of latitude as to what they can make and put on the road to make it considered roadworthy. They don’t need to have a Tesla rep wait on a long state DMV line to get one of their vehicles or an attached trailer equipment registered, same thing for DOT approval. All road equipment must have a bond or insurance, but in most states car makers have their own car manufacturer’s plates.

plenty of time to cover your puts before they go to zero $TSLAQ $TSLA pic.twitter.com/vOcuGyZtfw

Rush Week and the car carrier crisis is the backdrop while negotiations between Musk and the Security and Exchange Commission were about to settle out of court with a deal considered quite favorable to Musk given the circumstances of the Tweet-gate “Funding Secured” Scandal.

Although Musk renegade on the deal initially he finally decided to accept losing his chairmanship with the board. He remains as CEO. Two additional independent board members will be appointed and both the company and Musk must each pay a $20 million USD fine, $40 million total. That represents a little more than .1% of Mr. Musk’s total personal wealth. In a sworn deposition, Musk told investigators he wanted to impress his girlfriend with the buyout 420 figure. Funding was not secured according to SEC investigators. With the initial reneg the SEC filed suit in federal court. Ultimately everyone settled.

It seems that the Tesla way is the high stakes way of doing things, and that’s the paradox of the Land of Elon Musk on Teslaworld. In the meantime there’s a mad rush to the door at Tesla and they seem to have a recruitment and retention problem. The irony is that it seems everyone cannot contemplate Tesla without Musk, to remember there was a time Apple was without Steve Jobs the first time he left the company after the board of directors launched him, and the second time for eternity, when Tim Cook took the helm to take Apple on a trajectory that some say, just wouldn’t have been the same or perhaps as successful if Jobs was still there. A similar theory may be applied to Tesla. Unwillingly . . .

What’s your take on the car carrier crisis while the SEC takes Musk and Tesla to court? Let us know below!

LG's New EV Battery Plant Is a Welcome News for Tesla
Tesla Giga Berlin's New Hurdle: It's Not Only the Gov't, but Now Tesla Itself
END_OF_DOCUMENT_TOKEN_TO_BE_REPLACED