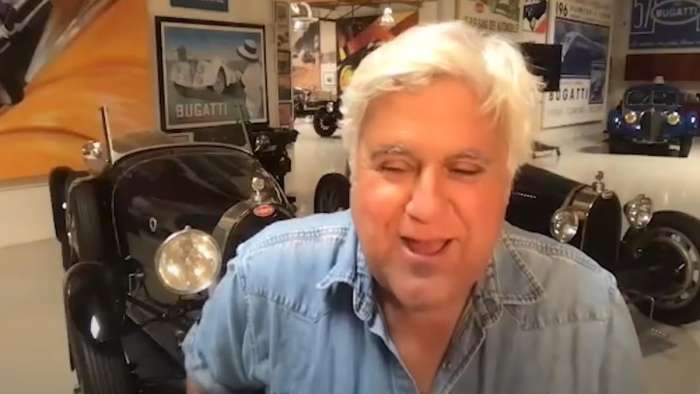 Jay Leno test drove a Tesla Model S Plaid a while back and we have some of his thoughts about Tesla's most highly performing and expensive vehicle. Let's see what he had to say.
Advertisement

In an interview with Cars and Culture, with Jason Stein, Jay Leno talked about the Tesla Model S Plaid, of which he owns one. He says:

"I’m stunned how good it is. I love that it’s built in America, American labor, American tech. I’m talking to the Tesla guys about their new carbon rotors, and I felt like my Mother when she‘d come in the garage and guys are talking about cam timing."

Jay has also talked about other vehicles, including Bugatti and Ferrari's that sell for $1 million and even more. He's impressed with the Tesla Model S Plaid and how it compares to the worlds most expensive and fast cars.

Jay has a lot of steam automobiles from the last century. He says that internal combustion engines need to build up to the energy they get and to accelerate. A car that runs on steam or electricity has that power available right now to power the car and make it accelerate quickly. He sees electric vehicles as being the dominant form of transportation in the future.

Jay likes that electric vehicles have little to no maintenance because there just aren't many working parts. The main maintenance is general cleaning, wiper fluid, replacing a wiper blade, keeping air in your tires, and rotating your tires. That seems to be about it. ICE (internal combustion engine) vehicles have much more maintenance.

Jay has known Elon ever since the original Tesla Roadster. Elon told Jay at that time he was going to build charging stations around the country and Jay doubted him at the time. But Elon did just that. Charging stations are now becoming common throughout the U.S. today.

I've seen used Tesla Model S Plaids with FSD (full self-driving) selling for as much as $156,000 online. That's almost $30,000 higher than the base price that Tesla sells them for.

I think the future of the Tesla Model S Plaid is bright for those who have the money to spend on it. It's an extremely fast and highly performant vehicle which gets a lot of range as well. I can see why Jay Leno owns one. I'd like to own one some day, but presently, it's out of my price range.

Will Tesla be able to make a car faster than the Tesla Model S Plaid? I think there will be incremental updates to the Plaid and we'll see specs across the board get marginally better. But it won't be until we see the Tesla Roadster and especially the Roadster with a SpaceX rocket booster, that we see a Tesla vehicle easily surpass the Tesla Model S Plaid.

However, after that, when it comes to driving on the road, we're reaching the laws of physics and what physically can be done while driving. The main thing I'd like to see is a competing EV (electric vehicle) actually come close to or beat the Tesla Model S Plaid and be able to match it on price. I don't see this happening any time soon.

What do you think of the Tesla Model S Plaid? Is it the best family sedan vehicle in the world today? Will another vehicle be able to top it?

Jud wrote on February 6, 2022 - 5:15pm Permalink
This reminds me of other cars that accelerate quickly but don’t exceed in cornering or braking. How does this car handle and break compared to others in its price range? Also, what would one of those high acceleration runs do for range? What about all the environmental hazards associated with electric cars such as dangerous lithium mining and disposal of their batteries that can’t be recycled? Not to mention the amount of fossil fuels needed to generate the electricity to charge these appliances.
DeanMcManis wrote on February 7, 2022 - 1:01am Permalink
The Tesla Model S Plaid is a dream car for me. It is an amazing achievement. It provides acceleration that beats almost any other car in the world, regardless of price. Yet it is totally practical, and can be driven daily as a commuter car with quiet, comfortable and economical operation.