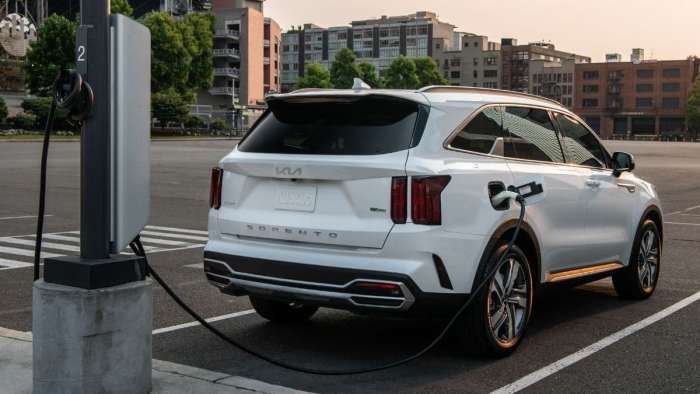 With the Build Back Better act stuck in limbo (which would expand and increase federal incentives for the purchase of electric vehicles), as far we know there will be no replacement to the existing federal tax incentive for the purchase of new plug-in electric vehicles. Some automakers, like Kia, have more credits left than others and this gives them an advantage.
Advertisement

Only two automakers have lost their eligibility for this tax credit so far, Tesla and GM. This credit is worth up to $7,500 in a federal income tax rebate, depending on the size of the drive battery in kWh and of course the amount one has paid in income tax. Both Tesla and GM hit their 200,000 credit limits in 2018, after which the credits for each phased out. Toyota is expected to hit its 200,000 limit this year, followed closely by Ford, according to evadoption.com. Will this hurt EV sales for those brands? It might, but of course it all depends.

Let’s consider whether the loss of the credits hurt Tesla or GM sales since 2018. In short, the answer seems to be no since both have continued to sell a lot of EVs in the years since (and in Tesla’s case it sold a lot more than anyone else). However, it did mean prices were adjusted, volumes increased (to achieve better economies of scale), and other production revisions made. But Tesla and GM, until last year now that we know Ford took the number two spot from GM in 2021, were the top two brands in terms of EV sales in the U.S. at that time, with very little competition offered from other brands in the years that followed the loss of their credits. That isn’t the same scenario now and over the next few years. Now, there are a whole slew of new plug-in vehicle choices available or coming in the next few years, including and especially at least a 4 way race at the heart of the U.S. EV market: the electric pickup truck. The competitive product choices alone will make it challenging for automakers without credits to reach plug-in vehicle sales targets as they will likely need to lower their profit margins or take other costly measures to compete with those makers that still have the credits.

Product offerings will be an interesting part of the balancing act each manufacturer has to make, too, since demand for automotive grade lithium ion battery cells will outweigh demand for at least the rest of this decade. It takes a lot more battery cells to make a full-size pickup or large SUV than it does a smaller crossover SUV or sedan. Consumers may be clamoring for more electric pickups, 6+ passenger SUVs and people movers, but every automaker will have to balance product releases with available battery supply. None of them will be able to completely satisfy the huge amount of pent up demand any time soon, as evidenced by reservation queues numbering in the tens of thousands to the millions for the first electric pickup truck offerings from Rivian, GM, Ford, and Tesla. And while someone waiting for a plug-in pickup may be unlikely to consider buying a plug-in sedan or compact SUV instead of an EV pickup, the SUV market at least will certainly see lots of people switching brands or vehicle size or type. This is where brands like Kia will have a distinct advantage over Toyota, Ford, GM, and Tesla.

How close is Kia to hitting its 200,000 limit for rebates? In June of 2020, Kia plug-in sales had only amounted to just over 20,000 credits, and sister brand Hyundai even less (close to 16,000). In the 18 months since, Kia certainly sold several thousand more plug-in Niros, the remainder of its 2020 Optima PHEV stock, and a small number of 2022 Sorento PHEVs (whose credits will only be claimed as soon as those buyers do their taxes for 2021), but this can’t be much more than another 15-20,000 rebates in that time since we know Kia’s plug-in vehicle sales in 2020 were lower than in 2021 and that the Niro alone accounts for most (if not all) of Kia’s 2021 plug-in sales. This means Kia likely has over 160,000 of the current credits left (enough to last at least into 2024). With Kia’s well timed plans to accelerate their electrified vehicle sales in the U.S. with the new EV6, the new Niro (for 2023 model year), the new Sorento PHEV and possibly another plug-in hybrid model, this means the 4 brands that have already lost their credits or will begin losing them this year will either have to cut their prices or face the significant loss of plug-in sales to the likes of Kia, Hyundai, VW etc. While that won’t be an issue the first half of 2022, or even the second half depending, you can expect it to kick-off some pricing “wars” in 2023 if the Build Back Better act fails to pass. If you’re intending to buy a plug-in crossover or SUV from one of these 4 brands that have lost/are losing their credits this year, you may want to wait until at least the latter part of the year, if price matters to you. Certainly, dealers that have been marking up Toyota Rav 4 Primes as much as $40,000 over MSRP will no longer be able to do so when Toyota both loses its tax credits and other brands are offering competitive products at significantly lower prices.