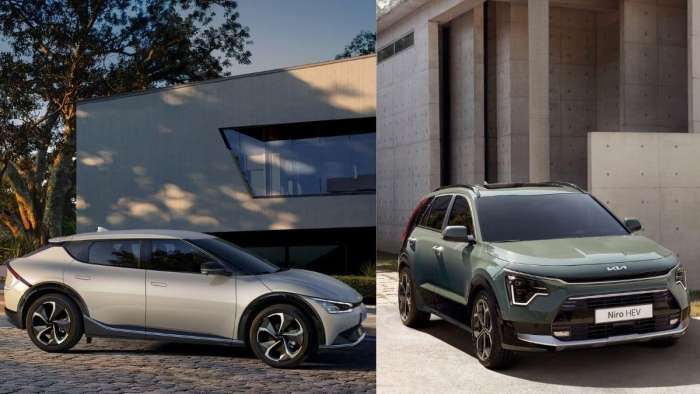 Kia had a very solid sales year for 2021, best ever in fact, despite some slow down in sales toward the end and despite the global supply chain and semiconductor shortages that are plaguing the entire industry. Perhaps one of the most striking aspects of Kia’s 2021 sales figures though is the growth of their electrified sales.
Advertisement

According to Kia America, U.S. market combined battery electric and hybrid vehicle sales for 2021 saw a 97% increase, year over year. The Kia Niro’s combined model sales would account for the majority of that increase. Its 2021 sales increased by just over 50%, year over year. The rest of that increase must be from the Sorento HEV since it is the only other electrified 2021 model year Kia that was on sale in the U.S. last year. Doing a little fuzzy math and assuming I am not leaving other vehicles out accidentally, that means with the three Niro models combined 2021 sales of 26,192 that somewhere in the neighborhood of 12,000 2021 Sorento HEVs were sold last year in the U.S. (unless the 2022 Sorento PHEV , which went on sale in Sep. 2021, was included). All up, at least 38,000 Kias sold in the U.S. last year had some form of electrification. If Kia has enough battery supply, strong demand seems to be there for the 2022 Sorento PHEV as the only non-luxury midsize 3 row PHEV on sale in the U.S., for now. With the HEV version also being the most fuel efficient 3 row SUV without a plug, Kia shouldn’t have much trouble selling as many of these two models as they can bring to market this year.

Kia has set a target of 3.15 million global sales for next year, which would be an increase of about 328,000 or more vehicles, or 13.4% growth, according to Automobilsport.com. Electrified vehicle sales growth will be a significant part that growth with the availability of new electrified models like the EV6, new PHEV and HEV versions of the Sportage (the Sportage was Kia’s best selling model, globally, for 2021), and the redesigned 2023 Niro, along with increased production of Kia’s existing electrified models. To achieve this sales increase, Kia along with its Hyundai partner, plan to stabilize semiconductor chip supply/demand and vehicle production schedules among other strategies in order to meet their growth targets, according to Reuters. They are likely better positioned to do this than other manufacturers given their relationship with South Korean semiconductor manufacturers.

Might Kia’s electrified sales (roughly) double again next year? If supply of semiconductors keeps improving, and battery and other component supply is what it needs to be, there is plenty of reason to be optimistic about Kia (and Hyundai) significantly increasing their electrified vehicle sales in 2022, but doubling again isn’t their plan. I am also certain that their electrified sales will still be dominated by hybrids, as Kia doesn’t estimate reaching a BEV dominant balance of electrified vehicle sales until 2030, according to Inside EVs. Of course that will be true for a lot of manufacturer’s not named Tesla.

One other interesting statistic worth mentioning: in Q4 2021, according to Autonews.com, Kia had the lowest average transaction price of any manufacturer at $29,922. This means something in light of the fact that the expected average transaction price for a new vehicle in the U.S. is expected to be more than $45,000 once all the numbers are in for 2021. This is an increase of over $8,000 from this time a year ago (which was also a record then, too). If Kia’s vehicles, including their electrified ones, are significantly more affordable than other brands, and they keep getting the kind of recognition and awards they got in 2021, it certainly won’t hinder their efforts to meet their 2022 sales goals. You go, Kia!

John Goreham wrote on January 7, 2022 - 1:21pm Permalink
I'm rooting for Kia. The Niro BEV is one of my favorite vehicles. However, I find it hard to cheer loudly for a company that won't tell investors, owners, and fans how many BEVs it produced in 2021 for the U.S. market. What's the secret?
JustinHart wrote on January 7, 2022 - 4:01pm Permalink
The “secret” to getting a sense for Kia’s U.S. BEV sales volume is to look at Kia’s official sales results for 2021. See the first link in my article on “a 97% increase, year over year”, above. The Niro was the only BEV Kia sold in the U.S. in 2021, and of course it also comes in HEV and PHEV models. We know what the total combined models of Niro’s sold in 2021 was 26,192, and almost certainly the majority of those were the HEV version (or at least the HEV and PHEV versions combined). So the BEV Niro likely sold no more than around 13,000 units in the U.S. in 2021 (my guess would actually be less than that). But Kia is going to dramatically increase the production of their BEVs over the next several years, starting now. The EV6 is already selling well, globally. Kia likely won’t be able to meet U.S. or global demand for it this year, or next or... The revised 2023 Niro BEV will likely sell in greater numbers due to its redesign too. I don’t think it is unrealistic to estimate that Kia will greatly increase its number of BEV sales in the U.S. for 2022. Still, I predict their HEV sales, and to a lesser extent PHEV sales, will represent a much larger % of their electrified sales this year (as long as Sorento and Niro PHEV supply is adequate). It sure would be nice if Kia and other automakers just broke down the numbers by model type though, wouldn’t it? But then, I’d have less to write about. :)
John Goreham wrote on January 7, 2022 - 7:29pm Permalink
Smart breakdown. My worry is that the U.S.'s share of Kia and other brands' BEVs are going to places that mandate them. Like Europe. I hope we do get more, but the Niro BEV's been around many years now and they are like unicorns. The only one I can remember seeing was the one I tested. I found a person who owns one here in Mass. (on FB) and did a story about it because it was so unusual.
JustinHart wrote on January 8, 2022 - 1:46am Permalink
I think your worry is well founded John. Europe, and China, are mandating EV (or EV capable PHEV) sales more than the U.S. But I think U.S. sales will rise regardless because of a few factors: 1. Tesla! Other automakers are losing progressive more sales to Tesla (or are at least seeing how quickly their sales are rising and how fervent the market is for their vehicles). They want to, they HAVE to, compete. 2. Kia (and Hyundai) are looking to grow their market share, and while they can certainly do that in Europe and China, competition there is more “fierce” than it is in the U.S. (because of competition from local manufacturers in both areas, and Tesla of course). In the U.S. Hyundai and Kia combined are selling about the same volume of EVs as any other manufacturer, besides Tesla. So the field is “wide open” if you will. Given Kia and Hyundai’s relationships with Korean chip manufacturers and battery manufacturers, not to mention their solid sales trajectories compared to other U.S. manufacturers, I think it comes down to either the Korean brands, or the VW group, to vie for the #2 spot in EV sales in the U.S. for 2022 (and likely 2023). I think things really start to get interesting though when Ford and GM (and Rivian and Lucid and...) start being able to produce EVs (pickups and SUVs specifically) in larger numbers, after 2023.