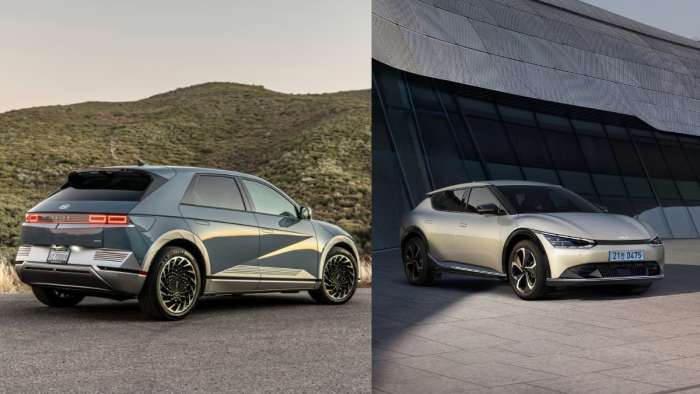 Kia and Hyundai have done something extraordinary in the European market recently. November 2021 was the worst sales month on record in Europe. Yet, Hyundai and Kia managed significant sales increases while almost every other manufacturer saw significant sales declines due to the ongoing global semiconductor supply issues.
Advertisement

According to Automotive News Europe, Hyundai and Kia managed to increase their sales there last month by 42% and 20%, respectively. How did they do this? Apparently it was due to their ability to leverage connections to Korean chip manufacturers which allowed them to avoid long manufacturing pauses that have plagued other brands.

In Europe’s largest vehicle market, Germany, Hyundai and Kia combined sold 6,153 plug-in vehicles in November according to Inside EVs (including their EV and PHEV sales). That figure puts them into 3rd place for German plug-in vehicle market share for November (behind Mercedes-Benz and Volkswagen). According to PR Newswire, while Hyundai saw a 20% drop in its overall sales in the U.S. in November, its “eco friendly” sales (which includes standard hybrids and fuel cell vehicles) was up a healthy 165%.

Also, according to PR Newswire, in 2021 Kia has seen a 91% increase in the sales of its hybrid and battery electric vehicles over 2020 figures. Hyundai and Kia are making significant gains in overall plug-in vehicle market share due to results like this. But could they pull off a second place finish in the U.S. market for plug-in vehicles next year?

As I pointed out in a previous article, Tesla alone is likely to sell over 300,000 EVs in the U.S. in 2021 and they will almost certainly dominate U.S. plug-in vehicle sales for the next few years, or more. According to Argonne National Laboratory, 542,599 plug-in vehicles (BEVs and PHEVs) have been sold in the U.S. in 2021 through November (with BEVs making up roughly ¾ of that figure).

If we use November’s numbers to estimate what December sales might be (which should be conservative due to year end sales pushes most manufacturers practice), we can add another 46,511 plug-in vehicles for a total of over 589,000 plug-in vehicle sales estimated for the U.S in 2021. If Kia and Hyundai can sustain the strong gains they have made in the U.S. market next year too, they may surpass VW, GM, and Ford to take the number two position. Of course those manufacturers are all planning to increase their sales next year too, so the question is really whether Kia and Hyundai’s sales growth will outpace them.

Let’s break down Hyundai and Kia’s potential sales a bit for next year. According to Inside EVs, Kia aims to increase its global, combined EV and PHEV production approximately 65% next year. Not all of that will be for the U.S. market of course, but given that their new to the U.S. model, the EV6, should compete well against other top selling EVs like the Ford Mustang Mach-E and a redesigned Niro EV will back it up, it seems reasonable to anticipate some healthy growth in Kia’s U.S. EV sales for 2022. Add in more expected growth of PHEV sales with the new Sorento, Niro and perhaps the Sportage SUV too (if Kia brings the PHEV version to the U.S. by late 2022), and the future looks good for Kia.

Hyundai may have similar growth due its plans for 10 electrified vehicles by 2022, according to Forbes, and chief among those electrified options will be the all new Ioniq 5 EV (which is already the best selling Hyundai EV, globally, in its first year on sale). “Electrified” includes standard hybrids that don’t plug in of course, but with the recently introduced PHEV Santa Fe and Tuscon SUVs, the planned Ioniq 6 EV sedan, as well as the returning Kona EV and Ioniq PHEV rounding out Hyundai’s 2022 plug-in portfolio, they will more than double their plug-in model offerings in 2022. VW, Ford and GM are not bringing out as many new plug-in options in the U.S. in 2022 as Hyundai and Kia are (combined).

Of course longer term, the number of offerings from the other top five market share holders will increase too and VW is already well ahead of Kia and Hyundai, globally. Regardless of the number of models on offer though, other brands could also sell as many or more plug-ins. Still, 2022 looks to be a year of opportunity for Kia and Hyundai to gain market share and possibly take over second place in U.S. plug-in vehicle sales for a time.

Image: courtesy of Kia and Hyundai.