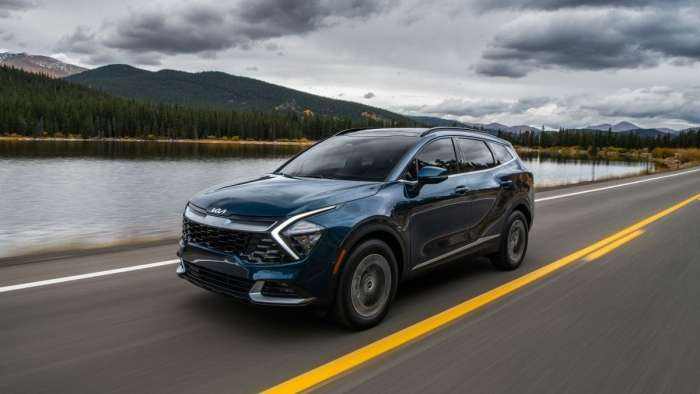 The new Kia Sportage PHEV is coming to North America sometime next year, we might assume, after it goes on sale in Europe in early 2022. Its looks are striking after Kia redesigned it. The new hybrid and non-hybrid versions of the 2023 model should be available in the U.S. in the first-half of 2022, but it will likely be late 2022 at the earliest before we see the 2023 Sportage PHEV in the U.S.
Advertisement

Because Kia uses the same 1.6L GDI (Gasoline Direct Injection) gas engines across their line of PHEVs, sometimes with a turbo as is the case for the Sorento PHEV, and because the Hyundai Tucson PHEV uses the same platform and electric powertrain/battery as the Sportage, we know a good deal about the forthcoming Sportage PHEV. It should have the same powertrain as the current 2022 Sorento PHEV with a combined 261hp and 258 lb.-ft, as well as the same 13.8 kWh battery. Since the Sportage is smaller and lighter it may have better all electric range and or more miles per gallon in hybrid mode.

Keep in mind that even if the EPA rates them similarly, there could be a fairly significant difference in real world range/mpg between the Sportage and the Sorento PHEVs, given their weight and size differences.

The interior of the new Sportage will have many of the same new features found in other Kia models for 2022 and 2023 like dual 12.3 inch displays, a rotary gear selector, and uniquely shaped vents.

We don’t know which trim levels might be available for the Sportage PHEV next year, and it may be that Kia only offers the upper trims as it does currently for the 2022 Sorento PHEV. If only upper trims are available, we can expect near luxury interiors with similar comforts one might find in the Sorento SX or SX-P trims.

For the larger Sorento, Kia chose to offer the PHEV only in the top two trims. Will they do the same for the Sportage? It may be a way to manage short supply. I know from social media reports that there are a lot of anxious buyers out there waiting on the availability of their Kia PHEVs so hopefully supply chain issues will improve next year. 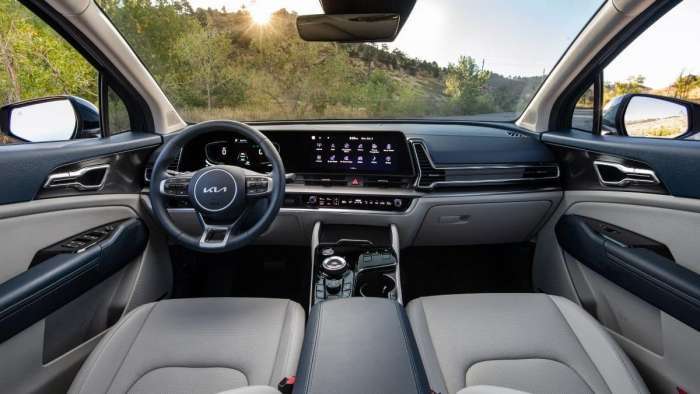 Otherwise, we might consider the trim levels expected for the 2023 Sportage Hybrid: the LX, EX and SX-Prestige. We can compare to the Sorento Hybrid and Sorento PHEV which only come in the S or EX trims (Hybrid) and SX or SX-Prestige (PHEV) trims in the U.S. It seems the Sportage spans a broader trim lineup in Hybrid form, whereas the Sorento splits it with the hybrid offerings in lower trims and the PHEV in the upper. That may make sense in terms of the generally greater demand and price sensitivity around compact vs midsize SUVs.

Will North American customers be able to get lower trim Sportage PHEVs if they want them?

It remains to be seen but hopefully it is an option. One more thing to point out, in the 2023 Sportage Hybrid lineup for the U.S., the LX trim is likely the only trim that will come in FWD (with AWD as an option). The other trims should have AWD standard in case that matters. Note, the AWD Sportage uses an electro-hydraulic coupling with a center-locking differential, so it is perhaps a bit more rugged AWD than the flavors in other brands that lack a center-locking differential.

Because I see availability as a concern popping up in social media more frequently these days, for both European and U.S. customers re: the Sorento PHEV, what might the prospective Sportage PHEV customer expect in terms of ease of getting one and whether to expect a premium price? Comparing figures on what I can find for the Sorento PHEV via the web, and extrapolating to estimate Sportage sales number for the U.S. market specifically, I would suggest that Sportage PHEVs, like Sorento PHEVs, will be hard to come by in 2022 and more likely to sell at or above MSRP than below.

Kia sold 75,295 Sorentos of all types in the US for the first 11 months of 2021, according to Kia’s Sales by Model figures. The total number of PHEV Sorentos sold should be a fraction of this number since they only went on sale in September, they are the most expensive Sorento model, and they are already scarce enough that some are confirming wait times of several months. I assume that only about 1-2% of total Sorento sales in the U.S. have been PHEVs for 2021, because that seems safe. Maybe it is more, but it probably isn’t much more. If we use a 1.5% figure, for 2021, assume a 5x larger number for 2022 since there is only one quarter of sales in 2021 and we might assume a small increase in production volumes as things scale. As such we might see around 5,800 - 6,100 Sorento PHEV sales in 2022. Let’s hope the pandemic and supply chain chaos doesn’t wreck that number.

The Sportage has sold at about 15% higher volume than the Sorento through November, in the U.S. in 2021.

Using those figures, we might expect to see about 6,700 - 7,000 Sportage PHEVs sold in the U.S. in the first full calendar year they are on sale (2023), keeping in mind that all things are not equal when it comes to the powertrains buyers choose at any given price point, vehicle class, or brand. I humbly suggest that fewer Sorento PHEVs than Sportage PHEVs will be sold, simply due to price, and that Kia will be supply constrained and challenged to bring as many to market in the US as my estimates suggest. Hopefully I am wrong, because the larger the vehicle the more profound a difference a PHEV drivetrain can make in terms of its carbon footprint (all other factors being equal), and because I truly want to see Kia succeed as we need as many plug in vehicles on the road as we can get as quickly as possible. That said, I expect potential 2023 Sportage PHEV customers to be faced with challenges similar to 2022 Sorento PHEV customers: i.e. limited availability, long wait times, and or prices over MSRP in some markets.

Finally, we can guess at the asking price of the 2023 Sportage PHEV, assuming Kia might only offer the upper trim(s) for this model too. If true, and basing my estimate on UK pricing for the Sportage PHEV and the pricing of the Sportage’s Hyundai Tucson PHEV sibling already on sale in the U.S., $38,500 as an entry price before any rebates or incentives or market pricing adjustments might be in the ballpark. If Kia offers lower trim versions of the Sportage PHEV, we might see a starting MSRP around $35,000, but of course that’s only a guess. Here’s to optimism and a world less challenged by supply chain issues in 2022! 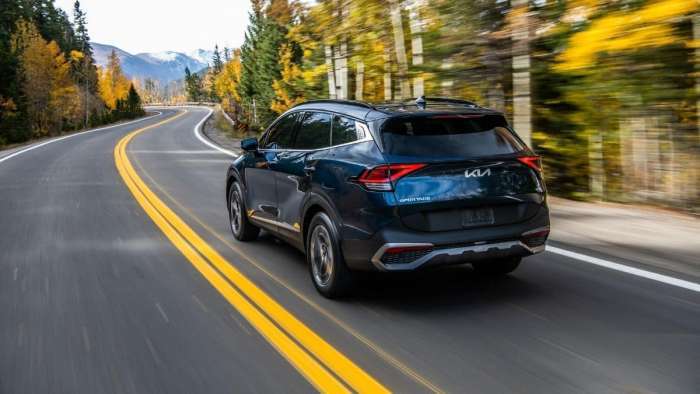