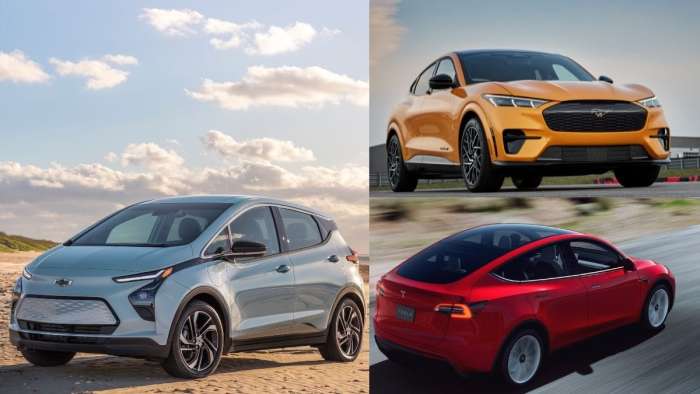 How Electric Vehicle Manufacturers Are Vying for The Lead in U.S. Market

Everyone should know electric vehicles are rapidly taking more market share from traditional internal combustion engine vehicles. But which manufacturers will lead the way in EV sales? The answer varies by region, of course, and much depends on the global supply chain, geo-political landscapes, the rippling impacts of the pandemic, etc. I will focus on the U.S. market since there should be rapid acceleration in U.S. EV sales, soon.
Advertisement

For the U.S. market (and in a few other countries and regions too) it is no secret that Tesla currently dominates the sales and production of electric vehicles with 79% of all EVs sold in the U.S. in 2020, and an expected 56% for 2021, according to CNBC. And while it is true that Tesla’s market share of EV sales in the U.S. is expected to continue to shrink as more and more models are released by other manufacturers, I think there is a bull market on predictions of massive growth by other manufacturers that tends to ignore certain basic challenges other brands will face.

The biggest of those challenges may be the supply of batteries other manufacturers will need to sell anywhere near as many EVs as Tesla is selling now, and another is the charging infrastructure for non Tesla vehicles. These are worthy of separate discussion, especially in light of Tesla’s recent announcement about opening its network to non-Tesla vehicles.

For the sake of argument let’s assume Tesla is going to have well over half of the U.S. EV market to themselves in 2022 as their largest competitors in U.S. sales volume — GM, Nissan, VW, Ford, and Hyundai/Kia — are unlikely to be able to produce as many EVs as Tesla does now, combined. For reference, Tesla’s U.S. sales were at 223,302 through the end of Q3 2021. I will conservatively estimate Tesla will sell more than 80k in Q4 if I round down to the nearest 10k based on Q3’s numbers. That means Tesla will likely sell well over 300k units in the U.S. in 2021. How many will the other manufacturers sell in 2021?

GM’s U.S. EV sales figures for 2021 are going to be disappointing (due to production stoppage of their Bolt models for potential battery fire risk).

Detroit Free Press reports that GM sold 24,810 Bolts through the end of October in 2021. They are about to start selling their new GMC Hummer EV this month, but at well over $100k in price, those sales will be tiny and I might conservatively estimate 25k in U.S. EV sales for GM in 2021. In the same article, Ford U.S. market EV sales are quoted as 21,703, also through the end of Oct. Ford is most likely going to surpass GM in U.S. EV sales in the last two months of the year due to its sales pace with the Mustang Mach-e (it’s only EV model on sale this year). With just shy of 6,000 U.S. Mache-e sales in Q3, according to Inside EVs, I’ll give Ford the benefit of a conservative bump for Q4 and say they should sell north of 27k EVs in the U.S. for 2021.

Volkswagen Group’s 2021 U.S. EV sales are at 27,300 through Q3 of 2021 according to Inside EVs, which is not quite 10% of its global EV production. Note these figures include sales of its affiliated brands: Audi, Porsche, Skoda, SEAT and more, though only the first two are sold in the U.S.). Of note, Europe is VW’s largest market for EVs (where they have 26% market share and sell over 70% of all EVs they produce). Volkswagen Group currently has about 8% of the U.S. EV market in 2021, the next largest after Tesla it seems, given GM’s former 2nd place position before its production halt and Ford’s only slightly higher estimated sales figures. So, VW/Audi/Porsche, GM, and Ford combined will sell somewhere north of 86k EVs in the U.S. market in 2021, conservatively.

Nissan has sold a little over 10k LEAFS in the U.S. through the end of Q3 2021, according to Inside EVs. Nissan’s EV sales for Q3 2021 were one of its worst though. With only its one aging EV model (the LEAF), and unless Nissan heavily discounts it, a relatively low figure may be expected for Q4 2021, too. A conservative estimate then might be a bit over 12k total for the year.

Hyundai and Kia combined have sold over 15k EVs through partial year figures for three EV models according to Car and Driver and Inside EVs (for the Hyundai Ioniq and Kona EVs plus the Kia Niro EV). If we extrapolate figures for the unreported quarters we might see a combined Hyundai/Kia sales volume north of 25k for the full year.

Of course there are other EVs on sale in the U.S. from European luxury brands like Volvo and BMW, other American start ups, and more. Let’s also not forget that the U.S. trails China and the European market, by a huge margin, in terms of EV market share and models on offer for passenger vehicles (because global sales matter in terms of the volume each manufacturer may be able to produce in the near future). But all told, Tesla will likely outsell all other manufacturers combined, in the U.S. market in 2021, by more than 2:1. That is a very important statistic when we consider which manufacturers will be in the lead next year, and the next several years, in the U.S. passenger car market. Tesla’s lead is commanding. It seems safe to say Tesla will not be surpassed in 2022 by any manufacturer as it is simply impossible, given the length of time it takes to shift supply chain and production around. But who will be closest to Tesla next year?

Based on expected sales volumes for the current year, it would seem to be roughly a four way tie between VW, Ford, GM and Hyundai/Kia. All have plans to expand sales in the U.S. in 2022 with new models and or increased production. But it will take a couple years, if not several, for any of them to approach Tesla’s sales volumes in 2021. Don’t forget, Tesla is currently bringing a second U.S. factory online in Austin, TX and as mentioned above has a few critical advantages over every other manufacturer in the U.S. market, so they aren’t sitting still.

Tesla should be able to sustain healthy increases in its sales volumes for the foreseeable future considering its forthcoming launches and the most significant backlog of orders of any car manufacturer. Ford and GM do seem to be the most ambitious amongst this group based on their recent U.S. sales goals, but they will have to increase sales by about 10x just to approach Tesla’s 2021 numbers and about 20-30x to match what their 2024-2026 sales might be. That seems extremely difficult, but you never know. Only time will tell.

markwilliam wrote on January 21, 2022 - 12:21am Permalink
The information given is very helpful and informative. Would wish to know more.
JustinHart wrote on January 21, 2022 - 9:56pm Permalink
You’re welcome Mark. I published another piece today that references estimates for Kia’s EV sales for the U.S. and links those to Kia’s published 2022 EV sales targets, globally. I’ll certainly be writing more about what the 2022 electrified vehicle market in the U.S., and the world, looks like as we start to see data for sales and production shared by various sources. Cheers!