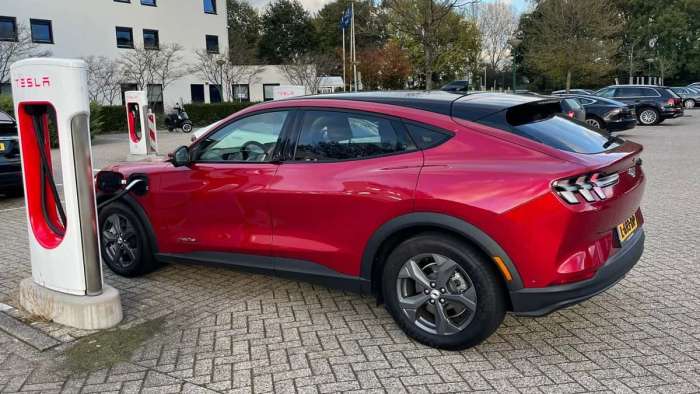 Tesla Opens Up Super Chargers to Other EVs in Pilot Program

We recently saw a Tweet from Elon Musk about Tesla opening its super chargers to other companies for use. There is a pilot program that has just begun. Let's see what this is all about!
Advertisement

Tesla is opening up its super charger network to other vehicles. This is going to help other electric vehicle companies AND help Tesla. Let's see what the implications are.

Tesla has 3,254 super charger locations with 29,281 super charger connectors and this is growing at over 50% every year. Tesla's super charging network is part of the Tesla "moat" that Gary Black, a financial analyst, describes that gives Tesla a huge competitive advantage.

Tesla's super charger network has a higher density of locations on the west and east coast of the United States. From Tesla's website, here are the primary advantages of its super chargers:

Automatic charging - With the Tesla app and automatically being connected, just plug in, charge, and leave. There is no need to swipe a card or payment option.

Relaxation and entertainment - Tesla super chargers are typically built near locations where you can grab a bite to eat or get a cup of coffee. With "infotainment" being built into cars like the Model S Plaid, one can simply stay in the car and enjoy the in car entertainment.

Monitoring - Tesla will monitor your charging status in real time so you know when your car is ready.

Tesla also wants you to save more by using an electric charger -vs- using gas for your car. Tesla made this calculator to see how much you will save by charging a battery in an EV instead of using gas in an ICE (internal combustion engine) vehicle.

Lastly, Tesla also has an application you can fill out if you want to "host" a super charger - basically have one built near your business.

Tesla is beginning a pilot program in the Netherlands with 10 super charger locations. This is a very small beta test, and I think that's smart. Tesla needs to get immediate feedback in a small way to quickly find any issues and fix them before doing a wider release. Here's what Tesla had to say about it, paraphrased from Tesla's website:

There super charger locations that are open to non Tesla customers in the Netherlands are:

If you are visiting the Netherlands and want to charge in one of those areas, you must have the Tesla app and an EV (electric vehicle). Otherwise, you cannot use the chargers. Tesla is planning to expand to additional locations for other non Tesla customers, but will wait to get feedback from this first launch.

Tesla is starting with a select number of sites so that they can review the experience, monitor congestion and assess feedback before expanding. Future sites will only be opened to Non-Tesla vehicles if there is available capacity.

Tesla owners will be able to use these super chargers, as well as any in the future that open up to non Tesla customers. There's no change whatsoever for Tesla owners - they just might have to deal with a little more congestion.

Tesla customers do get additional benefits at Tesla super chargers, such as seamless integration of charge post and vehicle, optimized route planning and battery pre-conditioning. Tesla also gives access to its customers to the lowest Supercharger pricing.

Other Chargers Besides Tesla

Electrify America is the an EV charging network with goals to reach about 800 charging locations and 3,500 individual connectors by the end of 2021. This is a lot less than Tesla, but is still better than nothing.

Overall, in the United States, there are about 43,000 total charging locations with about 120,000 connectors (source: Reuters.com). That means Tesla has about 8 to 10 percent of the total numbers of locations and about 20% of the connectors.

Chargepoint is the biggest charging network and has over 18,000 charging locations across the United States and Canada, winning the title of biggest charging company available. I think at some point, Tesla will buy Chargepoint - in fact, I think they should. That would increase their share of super chargers to 50% in the U.S. and Canada.

What do you think of Tesla opening up its super charger network for others to use? Is this a good idea? Will Tesla and the other companies benefit?

LG's New EV Battery Plant Is a Welcome News for Tesla
Tesla Giga Berlin's New Hurdle: It's Not Only the Gov't, but Now Tesla Itself
END_OF_DOCUMENT_TOKEN_TO_BE_REPLACED