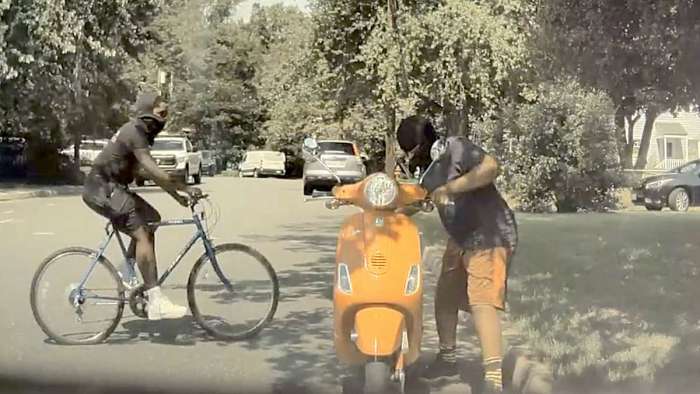 While not everyone is a Tesla fan, it turns out that Tesla owners have an excellent opportunity to change non-Tesla owner’s mind through Good Samaritan acts using this common Tesla feature.
Advertisement

Tesla’s Sentry Mode feature was originally designed to as a deterrent to help prevent thefts of Tesla vehicles. It was first available in all models beginning in 2017.

Sentry Mode adds a unique layer of protection to Tesla vehicles by continuously monitoring the environment around a car when it’s left unattended. When enabled, Sentry Mode enters a “Standby” state, like many home alarm systems, which uses the car’s external cameras to detect potential threats. If a minimal threat is detected, such as someone leaning on a car, Sentry Mode switches to an “Alert” state and displays a message on the touchscreen warning that its cameras are recording.

If a more severe threat is detected, such as someone breaking a window, Sentry Mode switches to an “Alarm” state, which activates the car alarm, increases the brightness of the center display, and plays music at maximum volume from the car’s audio system.

If a car switches to “Alarm” state, owners will also receive an alert from their Tesla mobile app notifying them that an incident has occurred. They’ll be able to download a video recording of an incident (which begins 10 minutes prior to the time a threat was detected) by inserting a formatted USB drive into their car before they enable Sentry Mode.

However, because its cameras begin recording once people (or other cars) get too close to the vehicle (with Sentry Mode enabled) potential thieves or innocent passerby’s are recorded before a crime has even occurred…if at all. Naturally, some view this as an invasion of privacy of sorts; however, as it turns out, it is one of the most useful features for non-Tesla owners and could help change some anti-Tesla views when Tesla owners help take a bite out of crime. 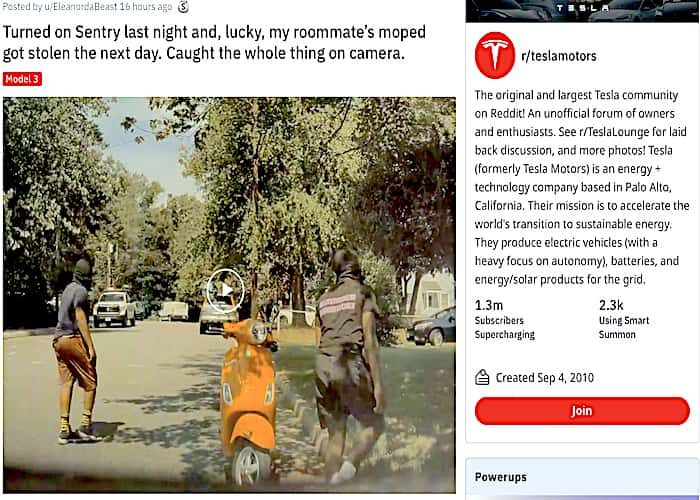 Oddly enough, the thieves involved were at least partially masked during the recorded crime; however, there is plenty of information not just from the imagery to help authorities identify the suspects, but also a timestamp from the videos to place the exact time of the crime committed---a very important factor with any criminal investigation.

According to one Tesla source: “…when Sentry Mode records an event, it creates a folder with a timestamp name and stores the last 10 minutes or so of video in there. The video files also have timestamp names. Chances are whatever triggered the event will be on the video the with the timestamp just before the timestamp of the folder.”

Here is the video for your viewing pleasure of just how well this feature works:

Smile! You're on Tesla Camera

There is a significant amount of animosity online between Tesla fans and non-Tesla fans that appears to go way beyond sportsman-like team spirit fandom and more toward our unfortunate political system where partisanship within both parties has turned ugly and ineffectual for running out country.

I would propose that this animosity can be lessened if both sides found some shared common ground and acknowledge that there is room enough in our world for both EVs and ICE vehicles. Perhaps now is the right time to return to a Good Samaritan attitude where vehicle owners help one another rather than tear each other down.

If you have ever been helped by a Good Samaritan while on the road, please let us know about it in the comments section below. Your response could help spread an ideal we need to share.

COMING UP NEXT: A dealership repair horror story.