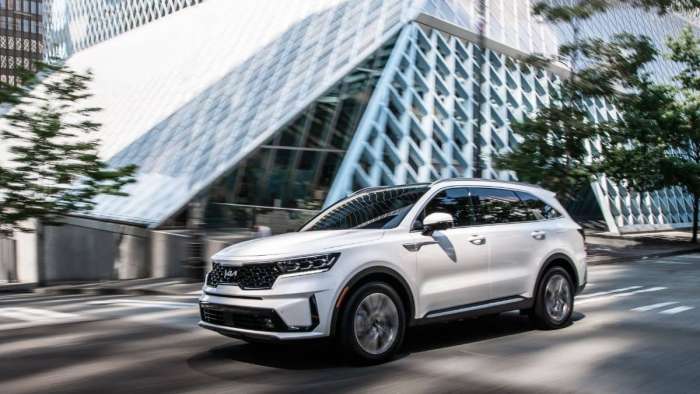 What I really want to know about my Sorento PHEV is: how good will my EV range be in the cold? I’ve owned and driven several EVs and PHEVs, driven them long distances in below freezing weather, braved mountain passes and snow packed city streets and I know plug-in vehicles handle well in harsh weather (especially when equipped with good snow tires!). But range always suffers when it's cold, period.
Advertisement

Since the 2022 Kia Sorento PHEV has an independent battery pack water cooling system (a first for Kia, according to the Hyundai Motor Group), I wasn’t sure how well it would do when the weather outside was frightful. I mean, “water cooling”, it’s all there in the name, right? Come summer, I am sure that water cooling is going to come in handy, but right now it’s making me think about zambonis and ice rinks (well, that and VW’s first car powered by a water cooled engine). In my previous winter driving test, I only did some local errands in freezing temps and snowy conditions. Today, I did a longer drive of 37.6 mi and decided to test how far I could go on battery alone in the cold. The conditions: It was 36-37F outside and raining/hailing hard enough to use the wipers on the high intermittent setting. There was ice and slush on the road in places. Here’s a picture: 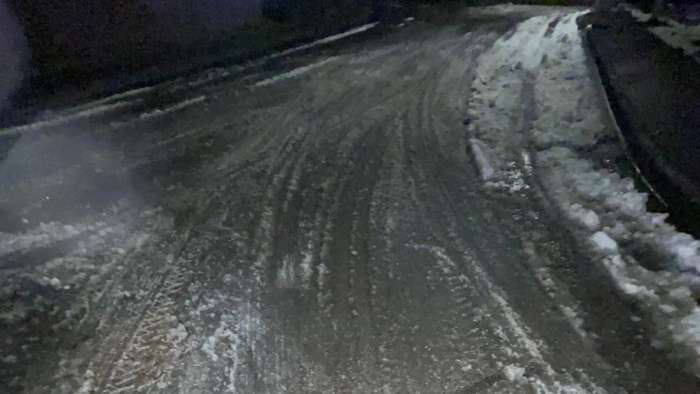 I drove about 85% of these miles on the freeway, pretty much at the speed limit (60 mph), sometimes a touch over, and for at least a few miles a little slower at 45-55 mph due to traffic conditions. I meant to do the entire drive without turning on the heat, just using the heated seat, steering wheel and rear defroster as long as it was safe to do so. I have a smashed out rear passenger window that is covered up in plastic, but it still started fogging up about ⅓ of the way into my outbound leg, so I turned on the defroster. I was in EV mode up until that point and then the engine switched on to idle because the previous driver had left the heat set to 73F. Oh well, at least I would be a little warmer.

Once the engine came on it stayed on for the duration of the outbound trip (about 13 mi), even though I tried turning off the defroster and or setting it to “Lo”, which means only outside air comes through the vents. I assume this is by design since it would add unnecessary wear to the engine to turn it off and on for such short durations. But I admit I am annoyed that it won’t turn off later, once the engine warms up and heat is turned off. Perhaps that won’t be the case when outside temperatures are warmer? I’ll have to test that later too. In any case I still got 160 mpg on the outbound trip which is outstanding for a vehicle of this size. Note, I also used exactly half of the estimated EV range (which was 32 mi when I started and 16 mi when I arrived). That means it’s possible the idling engine provided some heat to the battery (if that’s how Kia designed it to work). Or maybe it just means even in temperatures near freezing, I was still able to get slightly better than the estimated maximum range from my battery on the first leg of my drive. Nicely done Kia, nicely done. This hasn’t been my experience with other EVs or PHEVs I’ve driven, range is always less than stated maximum when it's cold enough for there to be ice or snow on the roads. 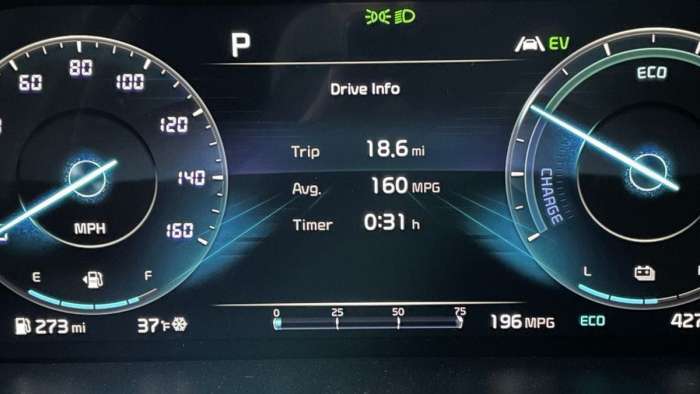 I also learned a lesson on this leg of the drive: if you intend to keep the gas engine off but want to use the vents for defrosting, you need foresight to make sure to leave the heat set to “Lo” before you turn off the vehicle.

I left my Sorento parked and off for 45 minutes (and made sure I set the heat to “Lo” before turning it off when I arrived). I managed to keep it in EV mode for almost the entire drive home. With 1.3 mi left, out of a 19 mi drive, it switched into hybrid mode. This means I got almost 18 mi of range from an estimated 16 miles on the inbound leg and 36.3 mi total from a full charge in near freezing temperatures. When the engine idles, though it may help the battery stay warmer, it does not appear to add charge. If it did add charge, I would have had more range half-way through the drive since it is more downhill than the return. For reference, I also had 12% charge remaining on the drive battery when I got home (because Kia doesn’t let us use up 100%). My mpg for the return trip was an even more impressive 257. 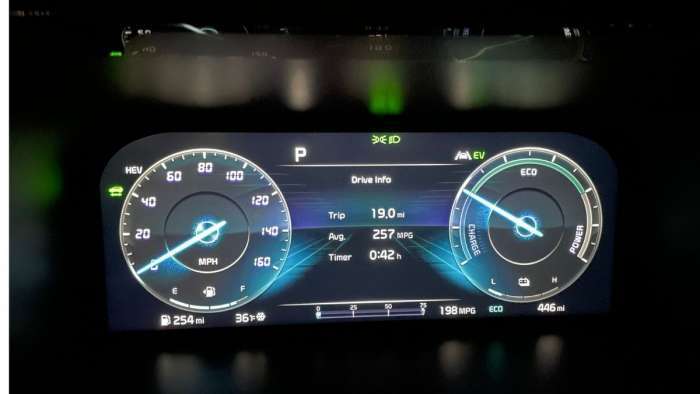 Now I just need to test my Kia Sorento PHEV on a much colder day on a longer trip (because some on social media have said the heater doesn’t work that well in extremely cold temps, like -33F). Brrrr, I can’t wait!

Lee wrote on January 4, 2022 - 2:21pm Permalink
Would you have total mileage can be driven from full to empty gas tank? Kia Canada says it is twice efficiency as Forte which claims about 640km per tank. It would be about 1200km or so. Thank you!
JustinHart wrote on January 4, 2022 - 9:46pm Permalink
Hopefully I will be able to do such a test later this month (well except for the running to empty part, want to avoid that, but at least close enough to estimate full to empty range more accurately). If and when I can do this, I will write it up for certain.