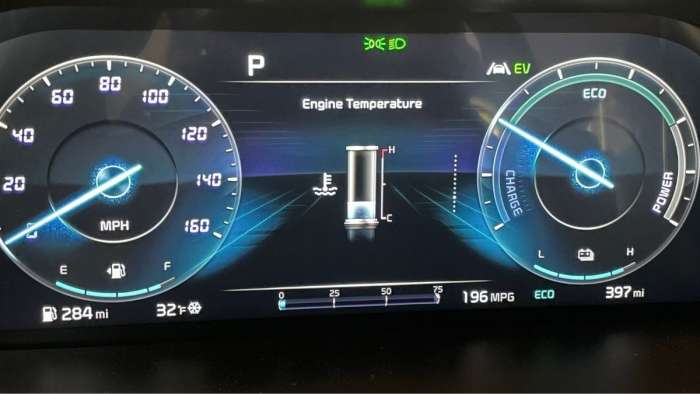 The Kia Sorento plug-in hybrid (PHEV) is a competent, flexible, efficient sport utility vehicle. But how well does it do in the snow? I tested my new 2022 Sorento PHEV in the most basic of scenarios, wintertime errand running, and I am happy to say that the Sorento PHEV performed very well in this limited test.
Advertisement

We had about 8-9 inches of snow in the Seattle area this week and the outside temperatures were 30-32F during my short test. I kept the Sorento in EV mode the entire trip and drove up and down multiple steep hills. All of the drive, except for a short .5 mile uphill sprint on the freeway (at up to 62 mph), was done on neighborhood streets with a 35 mph max speed limit. The road conditions varied from bare and wet to compact snow and ice completely covering the roadway. I have a smashed out window in my Sorento PHEV thanks to some jerk that was looking for something to steal. That being the case, I ran this test with the heat on (set to 73F), which means the gas engine was idling the entire trip. I was bundled up and couldn't comment on how well the heat worked, but I wasn’t cold and felt perfectly comfortable with the heated seats and steering wheel on. I want to point out that this testing is not exhaustive and simply provides a single data point that may be relevant to drivers considering plug-in hybrid SUVs like the Sorento.

When the Sorento PHEV is in EV mode, but the heat is on any setting other than “Lo” (which is just for the vents), the gas engine will idle to provide cabin heat. This was the case for my drive as mentioned above. I don’t know if the gas engine might also recharge the drive battery or the 12v battery while idling, but it does not seem to provide any motive power to the vehicle (as long as accelerator input or other conditions that activate the gas engine are also not met). I know there are owners and prospective buyers that are interested in the fuel economy of the Sorento PHEV when using the gas engine for heat. I can report that I got an impressive 46.9 mpg on my 7.5 mile, 15 minute, grocery getting drive in the conditions stated above. 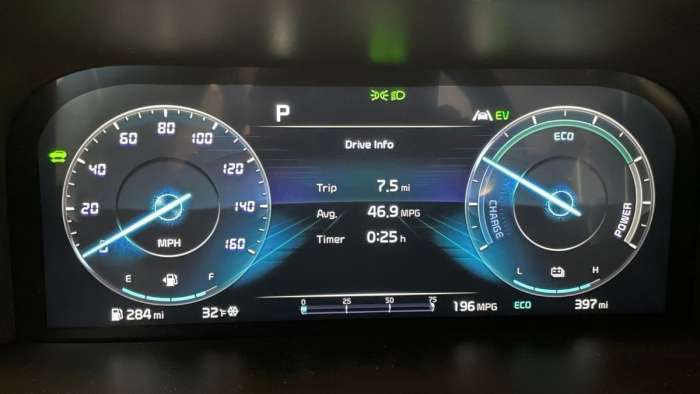 The Sorento is a 6 passenger midsize SUV and a non-hybrid version might only get about 24 mpg in similar conditions (so I got about 2x the gas mileage in the PHEV version). Not too shabby. And since the roads were completely covered in compact snow and ice in places on my drive, I put the Sorento into Snow Mode for these sections (about 2 miles in total). In Snow Mode the Sorento provides increased traction control and grip compared to other modes. The rest of my drive was done in Eco Mode. The Sorento PHEV handled admirably in these conditions, with zero wheel slippage despite multiple quick jabs at the accelerator in the most slippery spots, and sharp turns of the steering wheel too. Note, I was driving on the OEM tires, which for me are 235/55 R19 M+S Continental Crosscontacts. Also of note, I outperformed the estimated full battery charge range. This is surprising to me because cold temperatures tend to reduce the battery range of plug-in vehicles. In this short test I started with 32 miles of estimated EV range, drove 7.5 miles, and still had 26 miles of estimated EV range (which would equate to about 40 miles of EV range if I had kept driving in similar conditions for a long enough period of time). As I described above, the drive was mostly on 35 mph streets with only a short freeway sprint, but it does suggest that the Kia Sorento PHEV, in city driving and freezing temperatures, can still outperform its rated EV range. For reference, I have been able to get 40 miles (or more) out of the battery in warmer months, so this similar performance in winter is inspiring. Granted, I was running the gas engine for heat and that may have helped the battery perform better as well. I’ll perform another test without the heat on, in similar conditions, as soon as I am able.

On a final note, I’ll add that in social media Sorento PHEV groups I follow, some owners have pointed out a concern with items in the cargo section of the Sorento (potentially) escaping between the 2nd row captain’s chairs (see photo below). A cargo net or other containment system could prevent smaller cargo from escaping, and these are offered by Kia. However, due to supply chain issues, owners may need to find other means of securing internal cargo. Here’s one example of a makeshift cargo container that, combined with a net or other means of keeping a lid over the cargo, can keep smaller items secured while driving; perfect for that run to the grocery store! 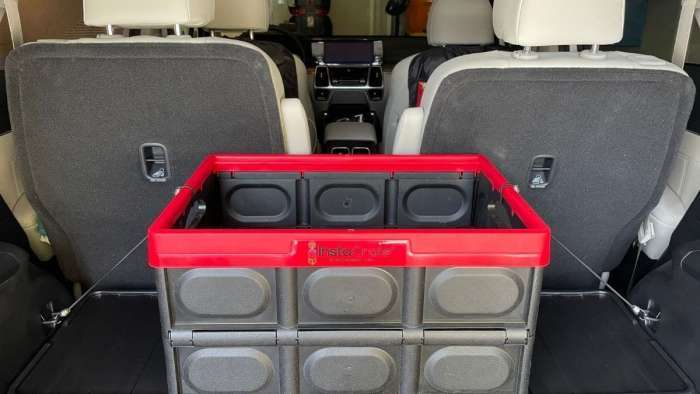 Got any questions or concerns about how the Sorento PHEV handles in winter conditions, or tips for securing internal cargo perhaps? Please leave your comments below.

John Goreham wrote on January 3, 2022 - 12:56pm Permalink
Great report, Justin. It's great to hear a report about an EV that meets or exceeds its EPA estimates in winter. Keep the info coming. Good luck with the glass replacement.
Justin Hart wrote on January 4, 2022 - 3:34am Permalink
Thanks John! I just wrote up another piece on a longer winter drive. My Sorento PHEV is still beating the maximum estimated range... next I just have to test it in truly frigid temperatures (below zero, if possible). Sound fun?