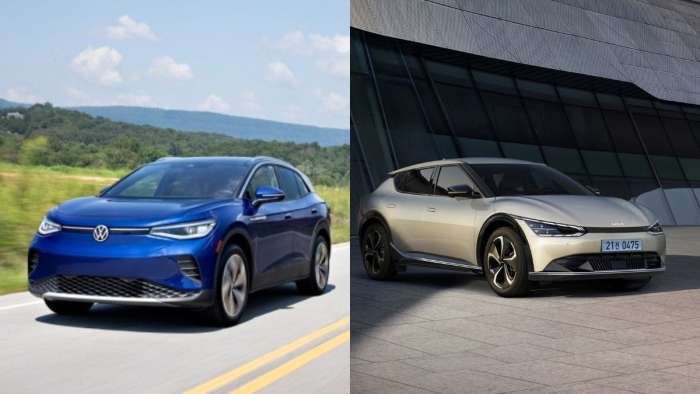 VW is the closest to catching Tesla, but it isn’t alone

My best friend, whose first car (a 1985 VW Jetta) was my first aspirational vehicle, had me over to speak with his parents. While chatting with them about their next vehicle purchase, they said something provocative: “what if I don’t want a plug-in vehicle?” As a plug-in vehicle enthusiast, it is a question that is hard to hear but also an obvious indicator of the profound change the act of plugging into an electrical outlet, instead of a gas pump, represents in people’s lives. Change is hard!
Advertisement

Note, they were curious about plug-in vehicles, the Kia Niro in particular, and said what they said not as an expression of disapproval. They are not opposed to plug-in vehicles. They genuinely want to understand, but to bring this back to the headline, a profound change is going on in the auto industry now and over the next decade plus. That change (to electric propulsion) is currently being led by Tesla.

I previously described the ambitions and extreme challenges other U.S. manufacturers face as they try to compete with Tesla in this EV sales race. As per Inside EV’s figures for the global EV sales for other manufacturers, if we focus more broadly than the U.S. market, and include PHEVs sales too, the race is much closer. VW group isn’t that far behind Tesla in global plug-in vehicle sales: 14.7% global share for Tesla vs. 12.3% for VW if we include PHEVs, or 21.5% and 10.1% for VW if we don’t. Furthermore, the Hyundai/Kia group is gaining global market share fast and is now in the top 5, globally, if we include the sales of PHEVs. Former contenders like Nissan are losing share and have dropped from the top five spots. Technically, VW and Tesla are also losing market share as more EVs are made by more manufacturers, especially with rising figures from Chinese competitors.

This all suggests that the U.S., while still a huge vehicle market and certainly primed for rapid growth in EV sales, isn’t going to be the primary force driving increased EV sales. Rather it seems more likely to be where the race opens up by allowing other makers, like Hyundai/Kia, to gain more new market share. It also shows us, in the present and near term at least, that PHEV sales are an important sales component and also important to reaching emissions targets, globally, since it is how other makers besides Tesla (which only makes EVs) can make larger volumes of plug-in vehicles while battery supply is limited.

Other manufacturers have massive investments to make in order to compete with Tesla in the U.S. market. That isn’t something every carmaker can do equally, so how can they even try? Collaborative manufacturing and mergers are two methods that come to mind. GM and Honda are collaborating using GM’s Ultium batteries. Toyota, Subaru and Mazda are likely to do this too, at least initially as in the case of the Subaru Solterra, given Toyota’s stake in each of those companies. Nissan, Renault, and Mitsubishi are as well, and have been for some time as part of their “Alliance”. We may see further consolidation of auto manufacturers over the course of the decade like Stellantis’ creation this year and or drastic shifts in company size and position as brands that can’t offer enough product lose more and more market share.

In closing, consider this: In 2018 the total global production of automotive grade lithium ion batteries was 290 gWh and in 2028 it is estimated to be around 2,000 gWh by Statista.com. For 2021, S&P Global estimated global supply to be about 600 gWh. The same S&P Global article shows a more rapid increase in global battery production through 2024 (to around 1,400 gWh) and then a slower increase starting in 2025 (to around 1,500 gWh). By combining these two forecasts we see global supply from 2025 - 2028 slowing down to an increase of only 500 gWh over the three subsequent years. So, while the global supply of batteries may triple over the next 7 years, this rate of increase does not match the rate of growth most companies trailing Tesla will need to achieve to catch up, except perhaps for the VW group. They have the smallest gap of any to cover in order to catch Tesla (whether we include their PHEV sales or not). This rate also may not align with stated goals of certain countries and states if the supply they need to meet their goals isn’t available. Something’s gotta give.

Image: courtesy of Volkswagen and Kia.