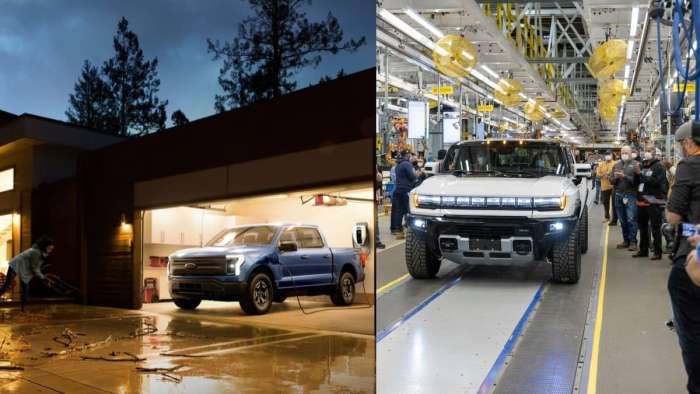 The race is on! Multiple manufacturers are vying to beat or compete with Tesla in terms of EV market share in the U.S. As I discussed in a previous article, that is going to be very hard to accomplish. Let’s look at sales forecasts and ambitions from the two other U.S. automakers, GM and Ford, through the end of the decade to break this down a bit.
Advertisement

GM has stated that they intend to surpass Tesla and become the number one seller of EV’s by 2025. GMs ambitions are admirable and, since Tesla will probably sell over 300k EVs in 2021, has a new factory coming online in Austin, TX, and at least a couple new models intended to go on sale between 2022 and 2025, it would be no small feat for GM to actually pull that off. According to projections in a CleanTechnica article, citing information from Visual Capitalist, GM and its two Chinese partners (Wulling Motors and SAIC), will have less than half the global market share that Tesla will have in 2025. That doesn’t quite square with what GM says it wants to do, so let’s look a little closer.

If we extrapolate a little from the numbers in the CleanTechnica piece, to get some estimates for the U.S. market specifically, Tesla’s U.S. sales in 2025 might be around 82% higher than their 2021 figures, or about 546k U.S. EV sales compared to a conservative estimate of more than 300k in 2021. Of course I am just guessing here and the real numbers could be drastically different, but using conservative estimates let’s us be more honest about what is at stake and the likelihood of things turning out as car makers might want them to.

GM has less than 30k EV sales in the U.S. for 2021. But this month they are rolling out the new Hummer EV, the Cadillac Lyriq won’t be far behind in 2022, the Chevy Silverado EV and more will be rolling off of GM’s production lines in 2022 and beyond as well. We can expect significant year over year increases in GM’s EV output barring any catastrophic developments. For GM to exceed the conservative estimate for Tesla’s 2025 U.S. EV sales though, they will have to sell about 20x as many EVs than they do right now. I’ll note that that is likely a much faster ramp than Tesla has been able to pull off in any 4 year period.

According to Green Car Reports, Ford plans to produce over 200k Mustang Mach-E EVs per year by 2023, by trippleing production in two years. This is also ambitious, and in the same timeframe Ford is also intending to sell several tens of thousands of F-150 lightning electric pickups, plus other models, ostensibly. According to elecktrek, Ford aims to produce 160k F-150 lightnings per year in 2025. That combined with a few hundred thousand Mach-E sales would still require another 100-200k EV sales for Ford to hit Tesla’s projected sales levels, above.

Both Ford and GM are investing in the production capacity they will need to take on Tesla, and it will be an interesting sales battle to watch the next few years, no matter what. But there is another problem that all manufacturers may have to overcome. According to Forbes, battery shortages will plague the auto industry from 2026 through 2030, this following soon after the estimated recovery from the semiconductor shortage currently plaguing the auto industry. If that proves to be true, then just as GM and Ford are predicting they’ll close in on Tesla, everyone’s growth may be throttled for the remainder of the decade, which suggests relatively static sales levels for that timeframe unless manufacturers merge or more resource and supply lines can be built than anticipated.

In short, the idea that GM and or Ford will surpass Tesla seems, to me, impossible. However, that’s just my opinion and they might actually pull it off. They will certainly increase their market share as evidenced by Ford closing its reservation queue for the F-150 Lightning and their ability to sell every Mach-E they make in short order. Would consolidation or collaborative investment between two or more manufacturers make it more likely for other manufacturers to catch up and surpass Tesla? I’ll save discussion of that for another day, but if GM and Ford don’t catch Tesla, are VW, Hyundai-Kia or Nissan any more likely to? The answer to that may depend.

Image: courtesy of Ford and GMC.