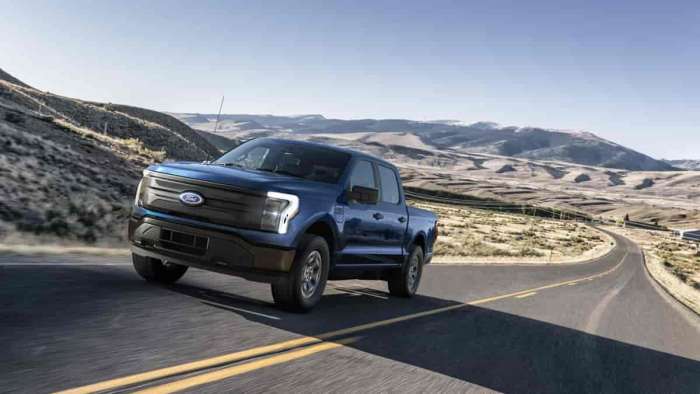 Ford has decided to cap its F-150 Lightning reservation system at 200,000 as it begins to convert them over to its order bank.
Advertisement

Ford Motors has undoubtedly been on a winning streak since it went back to work manufacturing vehicles following last year's pandemic-induced shutdowns.

Suffice it to say, those shutdowns and the supply chain woes that have impacted the semiconductors the automaker needs to produce its wares have had a significant impact during the last year-and-a-half. From the time the automaker had to shut down its assembly lines due to the coronavirus until it unshuttered them last year, Ford has had to endure its share of misery as the carmaker couldn't build its products. Then, they didn't have enough semiconductors to either build them or make them complete when they could build.

The automaker slowly but surely handled each setback by temporarily shuttering its plants for days or weeks. Or, it took the temporary step of building its products, but without the essential semiconductors, it needed to make them complete.

Simultaneously, the automaker has fully introduced major models like the Ford Bronco and Bronco Sport and the Mustang Mach-E, the carmaker's first fully electric vehicle. Each vehicle has been greeted with raves by the automotive press. And there were other intros, like the automaker's first electric addition to the F-Series pickup lineup, the F-150 Lightning, the Ford Maverick, the automaker's affordable, compact pickup. And then, there were the additions to existing product lines like off-road versions for the Expedition line of SUVs and the Explorer.

If these had been regular times, the automaker's plants would have been humming away, employing thousands of workers who would have been turning out the popular models. But with the pandemic still slamming the country and continuing supply chain issues, these have been anything but normal times going back a whole year to the time the automaker shuttered its lines and then as it slowly went back into production.

Things Are Returning Slowly To Normal

Now, as noted, things are getting back to normal as the assembly lines ramp toward fuller production, though there are still some ongoing supply chain issues.

In an interview with CNBC late last week, Jim Farley, CEO of Ford, said that "our [production] capacity is about half of what the demand is." He made his statement to several outlets, including Autoevolution. Farley backed up his statement announcing that Ford would halt the reservation system for its anticipated F-150 Lightning Electric.

The following Ford video explains a lot about the Ford F-150 Lightning.

Autoevolution quoted a statement from the F-150 Lightning reservation website where Ford said:

"As we prepare to make history together, we've closed reservations so we can start accepting orders. Sign up for updates and get exciting news on the [Ford] electric revolution. We can't wait to get you behind the wheel of an F-150 Lightning truck."

Farley indicated that Ford could also easily stand to double production of the Mustang Mach-E. However, as is evident, resources are also limited as the automaker tries to increase its Lightning and Mach-E production. Interestingly, Autoevolution speculates that while they anticipate a challenging year ahead as the team tries to catch up, if Ford can get close to doubling its production, it would Iikely take the electric truck market completely.

One feature that could help is the Lightning's front truck or fru-nk. I looked closely at the "fru-nk" and here is my analysis.

Autoevolution notes that Rivian has beaten everyone to market, and GM's Hummer EV will be out before the Lightning. However, Lightning will be the most affordable, and its Pro trim will cost about $40,000, while Rivian's R1T has a price point starting at $67,000, and the Hummer will be over six figures.

Ford has canceled any collaboration with Rivian as noted in this story.