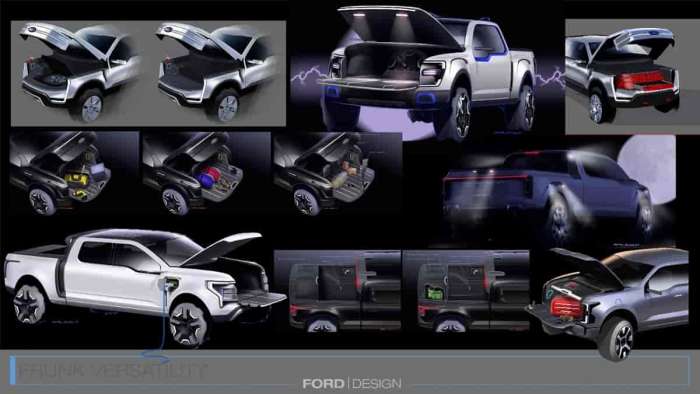 The F-150 Lightning's innovative Mega Power Frunk had very mundane beginnings. Designers used a cardboard box that they styled into the trunk (front-trunk) and they made changes as they showed it during the design input phase. The result is the innovative and versatile front trunk.
Advertisement 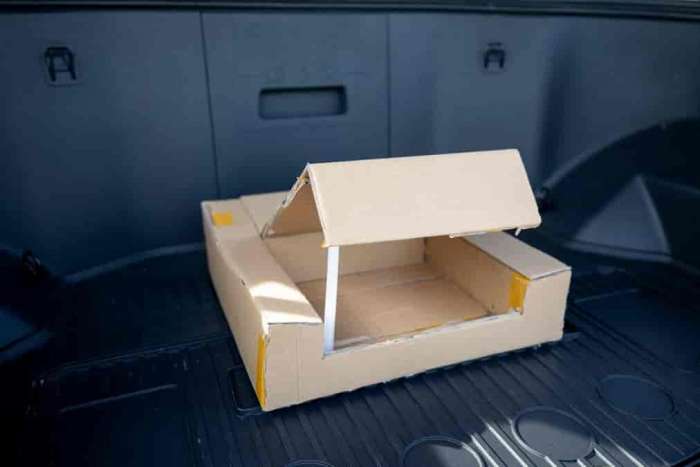 Unless you own an electric vehicle, you probably don't know what a frunk is – unless you read Torque News, of course. A frunk is a FR (ont) (tr) UNK. Ford has taken the space formerly occupied by the engine and has made it into a cooler.

Of course, this is only one idea for using the space. They might have left it alone, using it only as a second front trunk. Or, they may have used it for something else like a locking storage unit. Honestly, the ideas for the frunk have only been limited by the thinking of the design crew.

On the upcoming F-150 Lightning pickup – set to be a 2022 model – the frunk's design began life as a cardboard box. It found a new lease on life after being recruited by Ford to help develop a new feature known as the Mega Power Frunk. The all-electric 2022 F-150 Lightning pickup's new front trunk or, as it's known in the industry, "frunk" is the largest in the truck industry – with 400 liters (14.1 cubic feet) of cargo space and a maximum payload capacity of 400 pounds.

"The F-150 Lightning pickup's Mega Power Frunk is one of those features that reshape what vehicles can provide for customers. Its sheer size, ample power supply, drainable floor, and open and close system that opens with the touch of a button make it frunking awesome!" said Linda Zhang, F-150 Lightning Chief Program Engineer.

Many don't know that this spacious and dynamic space began life as a simple cardboard box with a cutout front door and a liftable hood.

It began back in February 2018 with Team Edison – Ford's dedicated battery electric vehicles incubator that incorporates close collaboration between different teams to find solutions to customer needs. A small group of young user experience designers set out to California, where they sat down with actual Ford truck and fleet customers to talk about how they might use such a feature.

The prototype, made of cardboard for simplicity and cost and built-in about a day using scissors and hot glue, was brought to every meeting to help customers visualize the opportunity.

In the studio, Greg Ardisana, design strategy director, passenger vehicles, and other Team Edison research members worked as consultants alongside engineering and design whenever they had customer use questions, leading to close collaboration between groups.

"Since the frunk was a new space, all the truck customers we interacted with got excited about what it could be and what use they could get out of it in their daily lives," Ardisana said. "We needed to take what they wanted and find a way to deliver on it."

Truck customers imagined fitting not one but two golf bags, even when it wasn't a golf day. The additional permanent storage keeps valuables out of sight, is lockable and secure. Fleet owners saw their crews using the space to haul bags of concrete and charge their electric tools at construction sites. Customers also wanted lights to see at night, electric outlets, a work surface, and optimized access height to make the space genuinely usable. All of these valuable insights were derived from a simple piece of cardboard.

There were challenges. Due to cargo volume numbers provided by vehicle architecture engineers, the first was the size of the frunk. It had to fit two golf bags, but this meant sacrificing a symmetrical frunk design.

The team treated it like a cooler box that needed to be durable and easy to clean and have a rubberized floor with anti-slide properties. Once the frunk fit the main shell, finding ways to add all the features on the customer wish list was the next hurdle.

Lighting began as typical trunk lighting. It was functional, but the "wow" factor was missing. So the team pivoted and installed truck bed lamps in the frunk hood. The lamps offered a lighting source on the inner side of the hood, which prevented cargo from blocking lights and did away with unwanted glare and shadowing of the load area.

Four electrical outlets and two USB chargers were added to provide versatility for work and play. The Lightning offers 2.4 kilowatts of power for everything from TVs to laptops, speakers to crockpots, power tools, and other devices.

Accessible, drainable and opening and closing with ease

Lastly, access to lift and remove objects from the frunk had to be waist-height, as customers did not want to reach over the truck's bed rails for their equipment. The waterfall grille was integrated into the hood by the engineering and design teams, who were able to create an accessibility height similar to the rear cargo area of a Ford Expedition.

The Mega Power Frunk has a powered open and close system with six different ways to open it, including from your phone on the FordPass app and through an integrated pushbutton on the grille.

Once the frunk is open, customers can fill it with ice and drinks to "frunkgate" it since it's water-resistant, cleanable, and has a drainable floor.

Customer Was In The Forefront of Planning

Steve McInally, the frunk feature supervisor, said the team explored every detail as an opportunity. "We put the customer first in every decision we made and were able to deliver on a Mega Power Frunk," he said. "And it's going to blow people's minds." The 2022 F-150 Lightning pickup will be available starting next spring.

LG's New EV Battery Plant Is a Welcome News for Tesla
Tesla Giga Berlin's New Hurdle: It's Not Only the Gov't, but Now Tesla Itself
END_OF_DOCUMENT_TOKEN_TO_BE_REPLACED