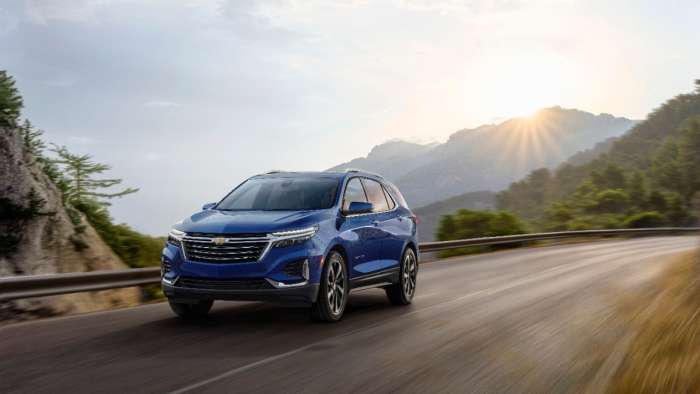 During its investor presentations this week, GM outlined its hopes for doubling its revenue by leveraging some of its platforms and products. It also disclosed plans to electrify the Chevrolet Equinox and develop a smaller, electric SUV.
Advertisement

General Motors continues to lay out its plans for investors, showing them how the auto giant intends to increase its revenues while converting more of its production to electric vehicles. GM plans to monetize several of its important assets like OnStar and its Ultium configurable battery platform while also commercializing its Autonomous Vehicles. GM confirmed plans to build an EV version of its popular Chevrolet Equinox and disclosed plans to build a smaller, more affordable SUV EV that could sticker for about $30,000.

While GM has released some of this information periodically over the year, this is the first time it has laid it all out for investors, disclosing how it intends to drive up revenue and increase margins. As I first reported back in June, General Motors plans to sell different versions of its Ultium battery technology and expertise to both the aerospace and rail industries. The 2022 GMC HUMMER EV will be the first vehicle to debut on the Ultium platform. The 2023 Cadillac LYRIQ EV will soon follow, as well as the Chevrolet Silverado EV and the 2024 GMC HUMMER EV SUV. GM is also marketing its HYDROTEC fuel cell technology to other industries as well.

“GM has changed the world before and we’re doing it again,” said GM Chair and CEO Mary Barra. “We have multiple drivers of long-term growth and I’ve never been more confident or excited about the opportunities ahead.”

Paul Jacobson, executive vice president and chief financial officer said, “Simply stated, we are at an inflection point in which we expect revenue to double by 2030 while also expanding our margins. We will achieve this by growing our core business of designing, building, and selling world-class ICE, electric and autonomous vehicles, growing software and services with high margins and entering and commercializing new businesses.”

GM says it has at least twenty different separate ventures that it will use to generate revenue. It outlined several including:

The best part of GM’s new Ultium battery platform is that the size can be reconfigured to fit different vehicles. The Chevrolet Equinox is a popular small SUV that can carry five people. It is larger than the both the Bolt EV and Bolt EUV and could be an incredibly popular EV, especially if they can keep the price around $30,000. GM did not say when it could be on the market, but used it as an example of how they could make it profitable. GM also said a smaller EV is in development that would be less than $30,000. GM also says it is converting more of its plants to build EVs. The biggest complaints about EVs still are that they are too expensive and there are too few places to charge them. Battery prices should start to come down as GM builds more and more EVs.

General Motors is promising huge developments on the charging fronts as well. The automaker says it is investing $750 million in charging infrastructure through 2025. It is pouring money into home, workplace, and public charging throughout the U.S. and Canada. Hopefully, that investment will help make vehicle charging more accessible and reduce drivers’ fears about going electric.