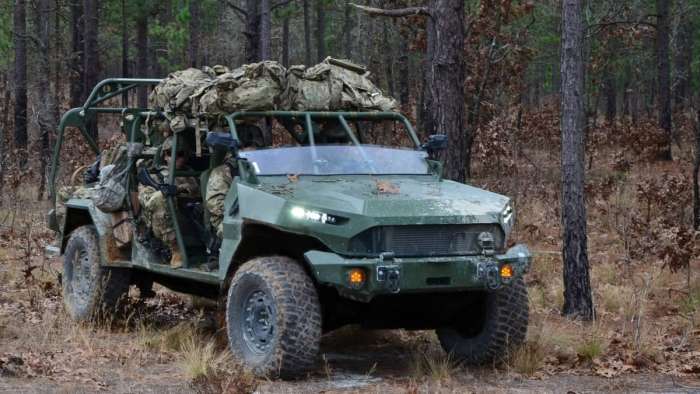 General Motors Defense is using GM's midsize truck chassis and transforming it into a troop carrier. Why the new vehicle should keep soldiers safer.
Advertisement

GM’s Defense division has delivered its first Infantry Squad Vehicle to the U.S. Army. The new military vehicle is based off the popular Chevrolet Colorado ZR2 midsize pickup. The chassis is transformed into an all-terrain troop vehicle that can carry an entire nine-Soldier infantry squad and their gear.

The Infantry Squad Vehicle or ISV uses 90 percent commercial parts, including some of Chevrolet Performance’s racing parts. GM Defense added a newly designed Rollover Protection System, to keep troops even safer while they are out on variable terrain on the battlefield. According to GM Defense, the 5,000-pound ISV “is light enough to be sling loaded from a UH-60 Blackhawk helicopter and compact enough to fit inside a CH-47 Chinook helicopter for air transportability.”

“One hundred and twenty days from contract award to delivery is a significant milestone, and I am very proud of the team for this accomplishment,” said David Albritton, president of GM Defense. “We’re leveraging General Motors’ engineering prowess and immense manufacturing capabilities to bring transformative solutions to the military vehicle market. Our initial success with the ISV shows our commitment to our customer and highlights our unique right to win in the military mobility market.”

The Infantry Squad Vehicle was developed as part of a $214.3 million contract the U.S. Army awarded to GM Defense in June. GM will manufacture 649 ISVs and will help produce up to 2,065 vehicles over the next eight years.

“The value we bring to our Army customer is our willingness to listen and adapt,” said Mark Dickens, GM Defense chief engineer. “During Soldier testing, the feedback we received was paramount in delivering a vehicle that met Soldiers’ needs, while maximizing safety and performance and taking their comfort into consideration. The production ISV we’re delivering today is an evolution from our original prototype design, and it’s certainly a vehicle that is a source of pride for the team.”

This is not the fuel cell vehicle that GM announced it was working on for the U.S. Army back in 2016. That hydrogen fuel cell concept vehicle was called the Chevrolet Colorado ZH2. It was also built on a modified Chevrolet Colorado chassis. Unfortunately, the infrastructure is still not in place to make hydrogen fuel cells economical, but GM is still working on the technology.

GM Defense is using GM’s latest technology to give the military world-class manufacturing efficiencies. The fact that 90 percent of the parts are already available should make the vehicles easier to maintain. Easier maintenance and a global supply chain should help eliminate some of the long-standing problems that the military confronts with outdated vehicles. Keeping vehicles in better working order should, in theory, keep our soldiers safer. Fewer soldiers would be stranded in dangerous areas, exposed to enemy forces. Plus, the Chevrolet Colorado truck platform could be transformed into several different configurations, depending on the different types of vehicles that the military wants.

We may also see some of the technology developed for the military one day make its way into the automobile marketplace. With off-roading being in high demand right now, the Rollover Protection System could be worth its weight in gold. These are the types of partnerships where everyone wins.