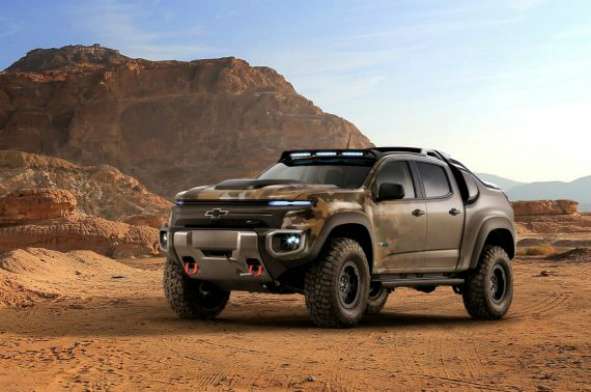 The specialized Chevrolet Colorado ZH2 stands more than six feet tall and is more than seven feet wide. It has massive 37" tires and its modified chassis can climb up or down steep inclines. It debuted at the fall meeting of the Association of the United States Army. The vehicle is designed primarily for off road use, making it perfect for fighting in adverse sand or rocky terrains. It runs on hydrogen which it converts to electricity. Its only by-product is water.

The Army has been interested in fuel cells and hybrid electrics for years as a way to make its fleets lighter, more agile, more fuel efficient and quieter. Often, it is the loud noise of the heavy trucks that can alert the enemy in battlefield conditions. The ZH2 is virtually silent. A huge plus with this vehicle is that it can also generate and export electricity. The truck has what they are calling an Exportable Power Take-Off unit. That would allow soldiers the ability to run power in remote locations. Another advantage is that the vehicle produces water, vital to soldiers in every region but especially is desert or mountainous terrain.

The infrastructure for wide spread use of hydrogen as a fuel is not yet in place for everyday drivers, but if it becomes available, it could change the driving landscape. Also, the idea of easily portable electricity is a game changer for the off-roading, hunting and camping communities.

General Motors and Army Tank Automotive Research, Development and Engineering Center (TARDEC) have been working on the hydrogen fuel cell vehicle for a year. Paul Rogers, director of TARDEC says, “Fuel cells have the potential to expand the capabilities of Army vehicles significantly through quiet operation, exportable power and solid torque performance, all advances that drove us to investigate this technology further.”

The Zh2 will continue testing at GM’s Milford Proving Ground until 2017. After that the Army will start field testing .

The Army turned to the automotive industry because it is already doing the research, plus it has a relatively quick turnaround time. This vehicle was created in just a year. General Motors has been testing hydrogen fuel cells for well over a decade. They are currently running a testing program called Project Driveway that monitors a fleet of 119 hydrogen fuel cell vehicles.