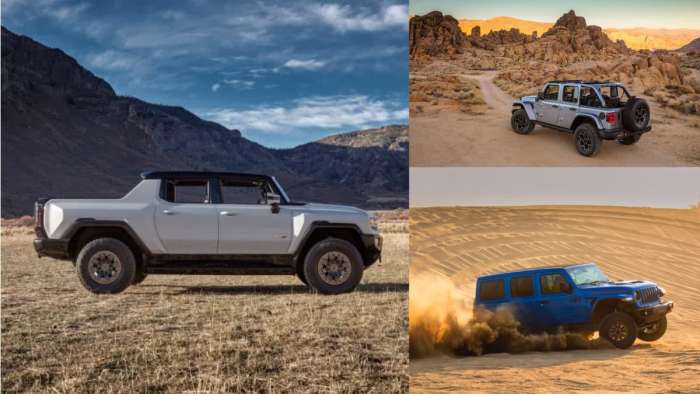 The HUMMER EV Is Being Touted As An Off-Road Goliath, Can It Live Up To Its Own Hype?

With its classic Jeep architecture and design, the Wrangler 4xe is easily the most off-road capable electric vehicle currently available. This hasn’t stopped vehicles like the Tesla Model S or Volkswagen ID.4 from having fun in the dirt, but GM has decided to weigh in on off-roading with the up-coming HUMMER EV. Can it out-off-road a Jeep?
Advertisement

The original “Hummer” wasn’t the posh SUV that many off-roaders consider a joke, like the H2 or H3 vehicles that were produced from 2002-2009, and 2005-2010 respectively. The High Mobility Multipurpose Wheeled Vehicle was originally, like the Jeep, a vehicle with military service in mind. It was built for tackling difficult terrain, not the streets. The H2 and H3 were not built for off-roading. They were built for sales and cultivating the aggressive image of a vehicle of war.

The H2 and H3 vehicles all had plush, luxurious interiors that make going off-roading and getting the interior muddy an expensive, if not impossible, endeavor. They are also known for getting stuck and needing to be pulled out of mud, ruts, sand, and other terrain that many vehicles would have been more able to handle. Jeep Wranglers are typically much more capable of getting themselves out of tight spots and difficult positions and have even been known to be used to rescue stranded Hummers in the wild. At least the H2 and H3 are more capable at going off-road than the Toyota RAV4.

GMC is creating a 9000 pound vehicle with 1000 horsepower and expecting it to be a major off-roading player, but I have a hard time believing that it will be able to translate the power into anything meaningful for actual off-roading. With that kind of weight, I would worry that you’d be more likely to bury yourself than climb out and that historic bridges might even not support the weight of the gargantuan vehicle. To be clear, this is a vehicle that weighs more than twice what my Dodge Challenger weighs, and the Challenger is considered a fairly heavy car.

The original HMMWV weighed up to 8500 pounds with all the trappings and got stuck in the sand and mud frequently. It was also known for rolling over and having a lot of mechanical faults and failure. The US Government is known for contracting out to the lowest bidder and this seems to have been the case with the original HMMWV. The Hummer H2 was lighter than the HMMWV at ‘only’ 6,600 pounds and it too was noted for getting stuck. An ICE powered Jeep Wrangler, by comparison weighs around 4,000 at it’s lightest and 5,300 in the 4xe variant. Even EVs, with great, instant torque can get stuck in the sand, as the drivers of the Volkswagen ID.4 in the Mexican 1000 can attest to.

A 9,000 pound vehicle, regardless of its massive, custom designed 35-inch tires, will still sink into soft sediment, like silt, sugar sand, and mud. Those tires, without the right treading, will not move the vehicle in those situations. It will give you nice rooster-tails of dirt and mud, but you’ll be staying still while you’re doing it. Even with its 1,000 ponies, the GMC HUMMER EV is more likely to get stuck out on the trails in Florida than it is to succeed. The weight of the vehicle will probably render it about as capable of off-roading as the Mustang Mach E.

One thing that I do appreciate about the HUMMER EV is that it has steel skid plates along the underside. GMC clearly recognized that the battery-skateboard design found on most EVs is at risk of puncture when on the trail and as such has prioritized the battery's, and thus the driver’s safety. This obviously will add a significant amount of weight, but I think that I’d rather weight be taken off from many other places over those skid-plates as I do honestly see them as necessary. The biggest problem that I have with the RAV4 Prime is that it has this “under-carriage-made-of-batteries” thing.

The HUMMER EV seems to me like it will be an expensive mall crawler that may see the occasional trail, but with its near 6-figure price tag, I sincerely doubt that many people will risk the potential damage that going rock-climbing can cause a vehicle. The HUMMER EV is aimed at the same group of people that the H2 and H3 were: folks that want an aggressive looking vehicle. I don’t think that it will be worth its price for people who are looking for a work truck or off-roader.

One of the “selling points” for the HUMMER EV is the Super Cruise “driver assistance” feature that is supposed to offer ‘hands free driving’. If you’ve been following me, you know how I feel about self-driving cars. They should operate under strict-product liability because the driver isn’t supposed to have to pay attention. Driver assistance should be something that keeps you alive if you fall asleep at the wheel. By making the claim that it allows hands-free driving, it implies that your hands are free to do something else. If you’re doing something else, you’re probably not paying attention to the road. So what else are you supposed to be doing during this hands-free driving if not reading a book, playing video games, texting, or napping? If you can’t do those things because you’re still at liability for the car getting in a wreck and you’re still expected to be the car’s fail-safe, how is it ‘hands free driving’?

The HUMMER EV from GMC is going to be a beastly truck with amazing stats. Will it compare to the Tesla Cybertruck or F-150 Lightning? No. It’s not supposed to. Both of those vehicles will be lighter and, if built to be used off road, will probably be more capable than the HUMMER EV. CrabWalk is awesome; I will give you that, and the multitude of cameras on the upcoming vehicle should make recording the drives pretty interesting, but I will wait until I see how this truck/SUV handles real life obstacles with real-life owners before I make my final opinion.