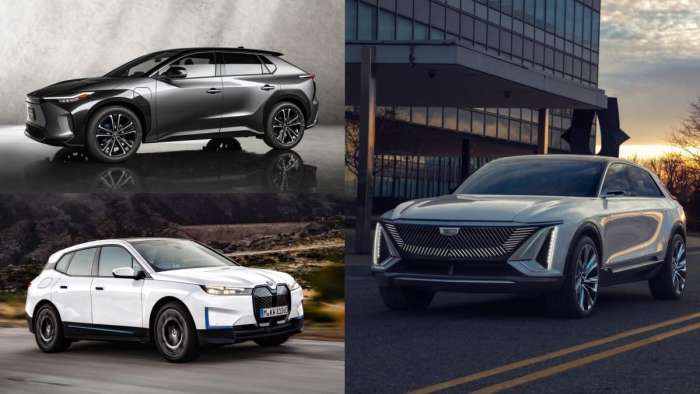 BEV SUVs, Like The Cadillac Lyriq, Toyota BZ4x, And BMW iX Are Taking Over!

The Mustang Mach E, Ford’s first commercially available Battery Electric Vehicle, has been a smashing success and a great kick-off for the company’s future of electrification. It’s expected that the Cadillac Lyriq will be out later this year to amaze us with the luxury brand’s first BEV. It’s not just the American manufacturers rolling out EV SUVs either. On June 2nd, Toyota announced the BZ4x, and before that, Subaru promised us the Solterra.
Advertisement

The BEV SUV market is a growing segment in the automotive sector. We’ve mostly seen smaller SUVs being electrified so far, but larger vehicles are being electrified and we can expect to see BEV versions of the Ford Explorer and Cadillac Escalade as the decade wears on. It’s not surprising that SUVs are a popular choice for customers as the vehicles offer superior storage space, passenger capacity, and safety to Sedans or Coupes. They’re promising from the engineer’s perspective as well, with the larger space offering greater opportunity to put new technology for range, safety, and comfort.

As Ford and GM both push towards adopting electric drivetrains as their ‘bread and butter’, we have seen the value of the stocks of both begin to rise. Even though Ford has only brought one BEV successfully to term, it has been toying around with the concept of electric vehicles since 1903. In 1996, GM released the GM EV1, the first commercially produced battery electric vehicle. It’s not surprising that both are being able to adjust in this new age of electrification.

GM’s Volt and Bolt are both popular entries in the EV market, but the world will have to wait a little longer for a GM EV SUV. The Lyriq, from Cadillac will probably be their first, though there’s some possibility that the HUMMER EV might manage to rock-crawl or CrabWalk its way onto the streets first. Both of these EVs utilize the Ultium battery that GM has been working on and should be capable of charging to about 80 miles range in 10 minutes, so as charging stations become more popular in various forms of rest stops, it should be easy enough to top-off during a restroom break or even possibly catch a near full charge during a stop for a meal at a sit-down restaurant.

Both the Cadillac Lyriq and GMC HUMMER EV offer Super Cruise, a driver-aid that allows ‘hands free’ driving on around 200,000 miles of select roads in North America. This range will change as more and more of the world’s roads can be added though software updates and patches, like what we see in the Video Game world. Rimac, the maker of the astonishingly fast Nevera, has suggested that a software patch could add over 100 horsepower to its already staggering statistic. Tesla’s AutoPilot and expected Full Self Driving modes will probably be similar, and of course, Ford has a fleet of autonomous vehicles running around Pittsburgh, gathering data to make their own self-driving software safer before releasing it to the general public.

Despite Toyota’s President Aiko Toyoda’s preference for the internal combustion engine, Toyota has shown us the BZ4x, a handsome SUV that’s about the size of the RAV4 Prime, and entirely electric. While we’ve actually gotten a fairly detailed look at the BZ4x, and we know that it’s supposed to use a little of Subaru’s All-Wheel-Drive technology, we know very little about what Subaru is going to give us with the Solterra. All we really know is that if you put the two side by side, the rooflines are astonishingly similar. I wonder if we have another BRZ/GT86 situation here. Toyota had previously taken flak for putting BMW parts in the new Supra, but the two Japanese brands are owned by the same group, and so are hopefully able to more closely share platforms without as much grief from their enthusiast fans.

German engineering is bringing us several BEV SUVs to choose from. The Volkswagen ID.4 demonstrates the capacity and reliability of SUVs nicely and has already proven popular worldwide. BMW’s iX was also revealed earlier this year, and Porsche hinted that their sporty Macan would be riding around in the near silence of the electric revolution soon. It is interesting to note that Volkswagen, Porsche, and Audi are related and that Ford is expected to use some of Volkswagen’s designs in their upcoming works. The BMW iX and i4 both use a pedestrian alert sound that was developed with Hans Zimmer’s help, so they sound quite awesome when they’re out zooming around. 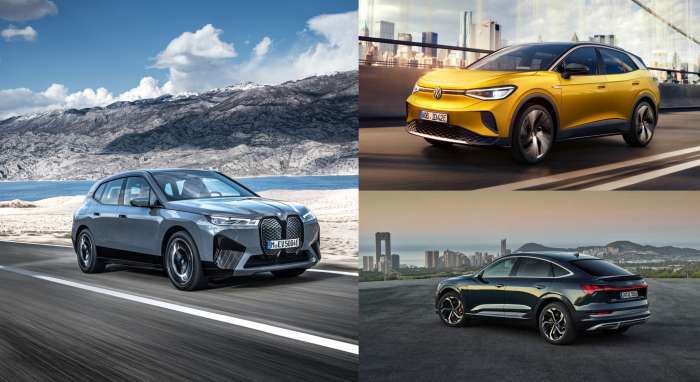 All-said, I think it’s safe to say that SUV sales are going to continue to soar, and that electrification will help increase sales by reducing the cost of ownership substantially. Less frequent repair and ‘just’ using electricity for fuel helps to alleviate the burden that more traditional SUVs place on their owner through less-than-stellar gas mileage.

Frank DiMuccio has been interested in the automotive industry since his childhood. In high school, he spent his free-time rebuilding his car and earned a newfound enjoyment of the grease and sweat of working in the garage. He can be followed on Twitter at @Fdimuccio4 for daily automotive news