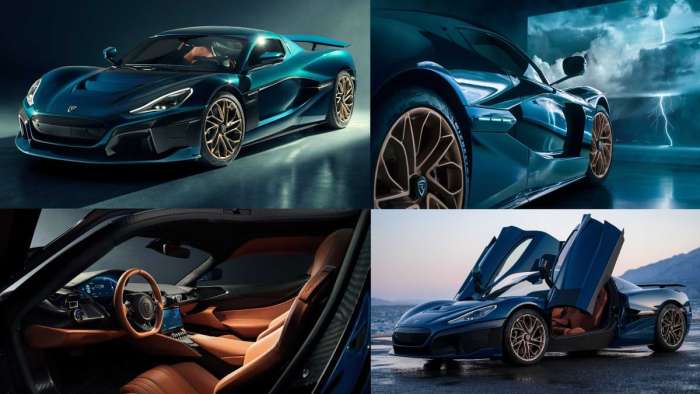 Rimac Nevera: An All Electric With A 7 Figure Price Tag

The Rimac Nevera is a dream car. It’s a limited run battery-powered hyper-car from Croatia. It ran against a Ferrari SF90 Stradale and left the Italian vehicle in the dust. Seriously, this new vehicle is an absolutely amazing machine to watch. The Tesla Model S Plaid is stunning as well, with 7 seats and similar stats to the Croatian hyper-car, but the Nevera is just jaw-dropping.
Advertisement

Beating a Ferrari in a race isn’t something to be taken lightly. Beating a Ferrari in a race when the Ferrari is an SF90 Stradale, pushing out 1000 horsepower, is an even more impressive feat, but the Rimac Nevera managed it with seeming ease. While the Ferrari was a hybrid, it wasn’t the kind of vehicle one normally associates with the term. The SF90 Stradale uses a twin-turbo V8 and several electric motors to power all 4 wheels, unlike my spouse’s Ford Fusion Energi or the ubiquitous Toyota Prius, both of whom are graced with significantly smaller ICE powerplants to complement their electric motors. The Rimac Nevera doesn’t have an ICE. It just has 4 gigantic electric motors that let it squeeze out around 1,900 horsepower.

The Rimac Nevera’s official stats state that it can sling itself to 60 miles per hour in under 2 seconds, an amazing feat for any vehicle, but Rimac showed us that it was possible with the C_Two, the precursor to the Nevera, in 2018. Prior to release, the C_Two had been estimated to get around 400 miles per charge but the freshly christened Nevera should actually see around 300 miles to the charge and can charge from 0-80% in just 20 minutes (with the right charger). The Nevera’s battery stores a whopping
120 kWh, signally more than the Porsche Taycan, with its 79.2-93.4 kWh batteries, or Ford’s Mustang Mach E max of 98 kWh. This is what allows the vehicle to get such amazing power and such great range.

One of the coolest things about the Nevera is the fact that its monocoque (not a unibody), is singly the largest piece of carbon used in the automotive industry right now. The monocoque, when not paired with motors, interior, or anything that makes the car actually a car only weighs 400 pounds. The Nevera’s computer checks each of its wheels to see if it’s slipping more than 100 times per second thanks to Rimac’s awesome “All-Wheel Torque Vectoring” system. I’m not sure how it compares to the Symmetrical All Wheel Drive found in Subarus, or how it might compare to the GOAT Modes that Ford has made available in the Bronco, but those are more geared toward off-roading while I’m nearly certain that the Nevera’s only supposed to handle slightly inclement weather, not mud, ruts, and bumps.

The Nevera isn’t something that most people will ever own. Only 150 of them will ever be produced and the only thing to stop a person from buying more than one is the 2.4-million-dollar price tag, but most people who can pay 2.4 million for a car wouldn’t have to hesitate to put down the same amount again knowing that the Nevera’s value is unlikely to diminish. With such a limited run and such stunning performance figures, I fail to see how the Nevera wouldn’t be the next McLaren F1, a vehicle that is nearly impossible to total; not because it’s amazingly safe, but because insurance companies only total out vehicles where the damage to the vehicle exceeds the cost of replacement. For reference a F1 in good condition is worth nearly 30-million-dollars thanks to its rarity.

One of the biggest fears of buying exotic sports cars for an ‘everyman’ is the repair bill, but electric vehicles are typically resilient and don’t have much in the way of repair costs, so hopefully that 7 figure price tag is a one-time fee, not something that you’re paying every couple of months like oil changes on a Bugatti; each one costing around 25,000 dollars. It will be cool to see how repair costs for EVs compare and if costs of ownership for Porsche or BMW drivers will start to become more similar to those of domestic vehicles?

Something that I think is absolutely astounding is that this Nevera is a vehicle in production and it outperforms the drag-specific EVs that some big names have made, like the Ford Mustang Cobra Jet 1400. This vehicle is almost nothing like anything else on the planet. Even the Model S Plaid, while impressive, isn’t this lightning storm of a car, though the Tesla promises to be much easier on the budget at ‘only’ around 120,000 dollars. Is the Nevera the pinnacle of engineering?

As good as the Rimac Nevera is, I still don’t think that even this is as good as it gets. I am so excited to see what the future brings.

DeanMcManis wrote on June 4, 2021 - 1:33am Permalink
The Nevera is an amazing hypercar. And it is an amazing showcase of how great an electric car can be without any consideration of cost. I seriously doubt that anyone buying the $120K Tesla Model S Plaid is going to worry about it's 9.23 second 1/4 mile being too slow, because (like so many $$$ exotic cars) you will likely never see a Nevera on the road, any more than you will likely see a Bugatti Chiron driving in your daily commute to work. Still, Rimac deserves kudos in designing and actually building a 1,900HP hypercar! The internet is full of new startup companies around the globe showing off their CG illustration of some cool, future Tesla killer supercar with amazing specs, only to quietly fade away from the limelight and never be produced. Interestingly, the even more exotic looking Pininfarina Battista uses Rimac's battery and drivetrain technology in it's equally rare (150 cars) and expensive ($2.5M) EV hypercar. I think that next year we will finally see the Tesla Roadster produced, and it's cold air thrusters might enable it to keep up (or even beat) the acceleration of the 10 times more expensive Nevara.