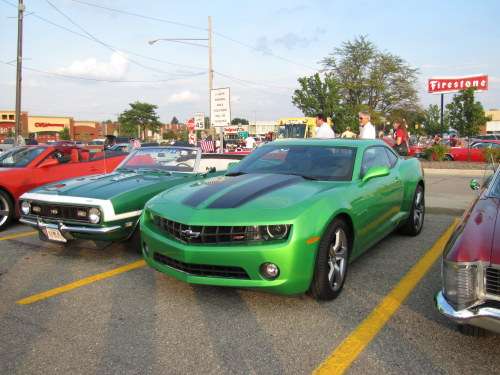 Not only is the Chevrolet Camaro the best-selling sports car in the United States, it is now the most-popular vehicle on Facebook.
Advertisement

According to the GM media report, the official Chevrolet Camaro page on Facebook has 1.8 million fans – and counting – more than any other official vehicle page on the social media platform. The passion and enthusiasm evident within the Facebook community has especially helped make the Camaro the best-selling sports car for the second year running.

For the record, nearly 60 percent of these fans are between the ages of 18 and 34, one illustration that the Camaro is introducing younger buyers to Chevrolet.

I guess as an early retiree I might be offended by this statistic, considering I was around when the first Camaro came out in 1967; but that’s what caught my eye when I took the photo of two green Camaros at the GM Design Car Show on the Wednesday before the 2011 Woodward Dream Cruise. Note the early Camaro next to a modern version.

“The community that has grown around the Camaro is truly remarkable,” said Carolin Probst-Iyer, digital consumer engagement manager for Chevrolet. “With nearly 2 million fans, people are constantly posting new photos and content, which in turn inspires comments and engagement from other fans. As a result, the community provides an invaluable way for us to communicate directly with the most passionate Camaro enthusiasts and to understand what they like most about their favorite sports car.”

With all respect to the mighy Ford Mustang, the Camaro passed the Ford Mustang in total sales in 2010, despite the Camaro being available only as a coupe until late fall. The arrival of the Camaro Convertible early this year surely helped extend that sales lead into 2011. From January through August, Camaro is on track to surpass Mustang sales again by more than 10,000 vehicles.

Camaro growth – in total sales and in Facebook “likes” – is expected to continue with the introduction of the new, 2012 Transformers Edition Camaro this fall, and the 2012 Camaro ZL1 . With more than 550 horsepower the supercharged ZL1 will be the most powerful and most capable Camaro ever produced.

“The fifth-generation Camaro has been inspiring fans from the moment it was introduced,” said John Fitzpatrick, Camaro marketing manager. “The new ‘Bumblebee’ and the new Camaro ZL1 will give Camaro enthusiasts even more reasons to talk about their favorite sports car.”

Chevrolet Eau Claire wrote on August 31, 2011 - 2:30pm Permalink
This article just illustrated the power of Facebook and social media; using social media as a platform to communicate and interact with fans can really boost sales, as it did here with the Chevrolet Camaro, I also find it interesting that the demographics for the Chevy Camaro is mostly younger people even though it's a car that's been around for a long time. This proves that is truly a classic.
filsmyth wrote on September 9, 2011 - 4:32pm Permalink
The Camaro is NOT a sports car. Neither is it a musclecar -- it is in the 'pony car' class.